‘We’re out here on vacation and you’re getting Tinder messages?’ Hilarious video shows the moment a man accidentally reveals to his girlfriend he is STILL on the dating app – while the pair are on a jet ski

A man appears to be in hot water after his girlfriend realized he was still on Tinder in the middle of recording a video while they were jet skiing.

The video, which was obtained by Jam Press, starts with the couple bobbing up and down on the waves while the jet ski slowly moves through the water.

The girlfriend, seated behind the man, can be seen holding onto his shoulders, giggling and mugging for the camera as the man speaks directly into the camera, which is off-screen.

The video starts with the couple sitting on the jet ski as the man speaks to the camera and the woman mugs for the camera, smiles and giggles 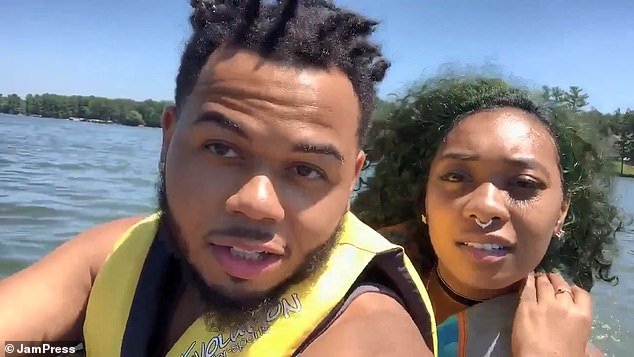 After a moment, the woman stares into the camera and says, ‘Is that Tinder?’

After a couple seconds, the girlfriend stares at the camera, which is presumably attached to a cell phone, and her expression drops.

‘What are you talking about?’ the man asks, shifting his eyes away from the camera and back to it, while revving the jet ski’s engine.

‘I thought you deleted that,’ she says. ‘Who is that? Why are they messaging you?’ 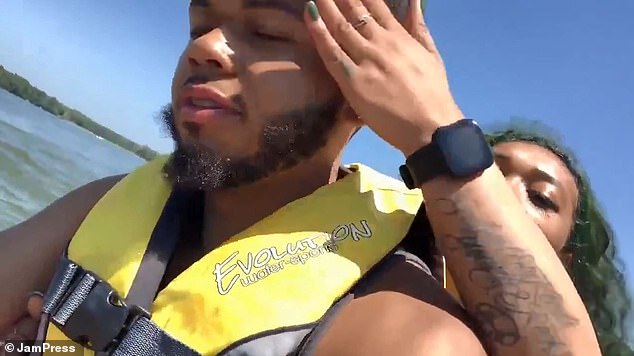 The man claims that he deleted the dating app, but the woman isn’t fooled. She demands that he gives her the phone and when he doesn’t comply, she taps him on the side of his head

When the man says that he did delete the dating app and tries to come up with an excuse for what his girlfriend is seeing, she interrupts him and says, ‘We’re out here on vacation and you’re getting Tinder messages? Are you messaging them back? What the f**k is this?’

The man doesn’t come up with an answer quick enough.

‘Give me your phone,’ the girlfriend demands, tapping the side of the man’s head when he doesn’t comply. ‘Park this!’ she says, referring to the jet ski.

‘I’m going to park this,’ the man says, before flooring the gas, sending the jet ski roaring through the water, in an apparent effort to cut off the impending fight.

The video ends as the girlfriend shrieks and laughs, telling her boyfriend, ‘I’m not playing with you!’

Inexplicably, the man continued to shoot the video even after he had seemingly been caught out. Even more strange, he posted the confrontation online – so it remains to be seen if the video is genuine or an piece of theater for hits.