Man accused of indecent assault is extradited from Perth to Sydney

A man accused of indecently assaulting a 12-year-old girl on a train as her family sat just metres away has been extradited to Sydney.

The man was filmed being escorted from Sydney Airport by police officers on Saturday night, according to 9 News.

The 34-year-old was arrested in Perth and faced court on Friday, where he was denied bail and the extradition to Sydney was granted.

A NSW Police spokeswoman told Daily Mail Australia on Saturday night that the 34-year-old was in the process of being formally charged for the alleged indecent assault.

Police had been looking to track down the man following the alleged attack on a train en route to western Sydney on January 1.

The girl sat next to the man, who struck up a conversation with her before he allegedly indecently assaulted her while her parents weren’t looking. 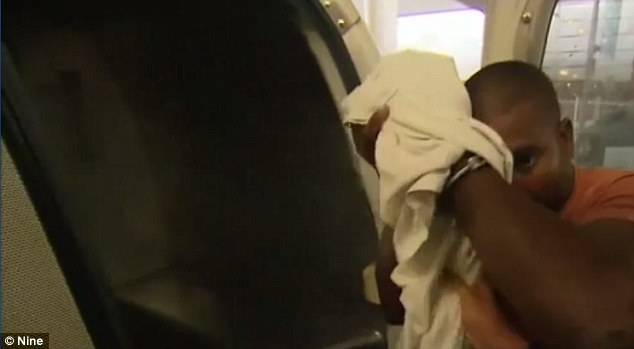 A man, 34, was arrested in Western Australia on Thursday and extradited to Sydney on Saturday night

The breakthrough in the case comes a fortnight after police publicly released CCTV footage of a man they believed could assist with their inquiries into the incident as part of a public appeal on March 14.

‘Sooner or later we will identify who he is and he would be in a much better position to come forward and talk to us about what occurred,’ Detective Chief Inspector Brad Monk told 9 News at the time.