A man is being slammed online after he admitted he got angry at his girlfriend for wanting to leave a fancy event because she unexpectedly got her period and stained her white dress.

In the Reddit post shared in the ‘AmItheA**hole’ forum, the insensitive boyfriend admitted to being upset that she wasn’t prepared and ruined the ‘very expensive’ dress he had bought her.

‘My girlfriend and I have been together for over two years. She has always been very neat, tidy, and very polished. She cares about her appearance, and I appreciate that. So this situation makes no sense to me,’ he wrote at the start of his baffling post.

Say what? A Reddit user admitted he got angry at his girlfriend for wanting to leave a fancy event because she unexpectedly got her period and stained her white dress (Stock Image) 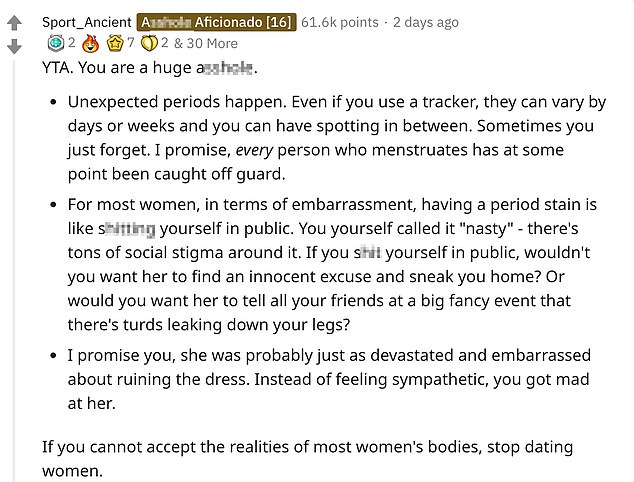 Can’ believe it: Commenters were stunned that he blamed her for not being ‘prepared’ and was annoyed that she ruined the ‘very expensive’ dress he bought her

The Reddit user explained that they were at a ‘very fancy event’ with his friends, noting that they were wearing masks and practicing social distancing.

‘My girlfriend was wearing a beautiful white dress, which I recently bought for her. The dress was very expensive. We were all having a good time,’ he recalled. ‘However, at one point, she excused herself to go the bathroom, and then I didn’t see her again until she sent me a text from the car asking if we could go home.’

The boyfriend said he was ‘slightly annoyed’ because he didn’t want to leave, and when he asked her why she wanted to go home, she shared that she had gotten her period unexpectedly.

Instead of being sympathetic, he blamed her for the situation, asking her ‘why she didn’t bring extra tampons or pads’ with her ‘or use those tracking apps.’

‘She tried to defend herself by saying that she did everything she could, and that she had a period stain, and didn’t want to stay because of the stain,’ he shared. ‘She asked me to lie to my friends, and tell them that she was feeling “unwell” so that she could go home.

Get over it: Many agreed that every woman has experienced an unexpected period in her lifetime and he needs to ‘educate’ himself about menstruation

‘She had a man’s jacket (a mutual friend of ours) covering her legs (and the nasty stain) and pleaded with me to take her home so she could shower and unwind.’

The man said the stain was ‘very noticeable,’ which only irritated him more.

‘It was very big and essentially ruined an expensive dress which I bought,’ he griped. ‘She also made me purposefully lie because she wasn’t prepared enough, and made me miss an event with my friends. Needless to say, I was extremely p****d.’

Unsurprisingly, his girlfriend told him he was ‘not being considerate’ and went to lie down because she had a ‘headache,’ but he didn’t seem to believe she had one.

He refused to properly speak to her until she apologized and gave back the jacket she borrowed, though he admitted that when he told the story to their friend — the same one who loaned her the jacket — he was told he was being an a**hole and his girlfriend agreed. 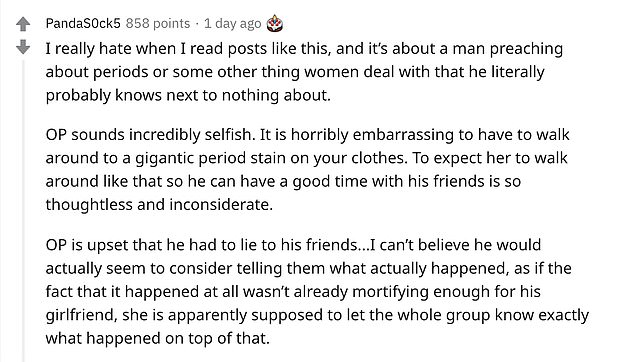 Get it? The man didn’t realize he was in the wrong until he read the angry comments slamming him and his misogynistic behavior

However, it wasn’t until he saw the number of angry responses to his post that he realized he was in the wrong.

‘You are a huge a**hole,’ one person commented, listing every way that he was wrong. ‘If you cannot accept the realities of most women’s bodies, stop dating women.’

‘This man doesn’t deserve a gf. Or any woman,’ someone else agreed, while another added: ‘I can just feel the misogyny radiating from OP’s original post.’

Many agreed that every woman has experienced an unexpected period in her lifetime and he needs to ‘educate’ himself about menstruation.

The man later updated his post, writing: ‘I guess I’m the AH. I logged out of this account about an hour after posting because the response was terrible, and then came back to a TON of responses calling me the AH.

‘After my girlfriend came home from returning the jacket, she apologized for ruining the dress and I apologized for being a dumba** and not understanding the whole ‘period’ thing,’ he explained. ‘She forgave me, then we went out for ice cream and rewatched her favorite movie. That’s the end of the story.’