A couple at the centre of a six-hour stand-off with police say it was like it ‘was like an adventure’ and officers can ‘come back anytime’.

Mohammed, 37, and his girlfriend Mikaela, 22, were arrested by police on Friday evening after their south-west Sydney street was placed into lockdown when residents reported hearing gun shots.

Speaking to reporters the day after the dramatic siege, Mohammed said he ‘laughed it off’ and that it was ‘like an adventure yesterday… I love it’, Seven News reported.

He also criticised the treatment they received by the armed police during the siege.

When asked if he thought police would return, he said ‘they can come back anytime they like and this time if I’m awake – I’ll answer the door’.

Officers including the Riot Squad had shut down Sylvanus Street in Greenacre on Friday afternoon after being told there were two individuals still inside the house.

Terrified neighbours told of their shock when they saw police swarm the property.

‘We heard the shots… and then a few hours later the whole street was surrounded by police,’ one neighbour told 9 News.

Mohammed, 37, was tasered by police and taken away as the tense six-hour stand off came to a close 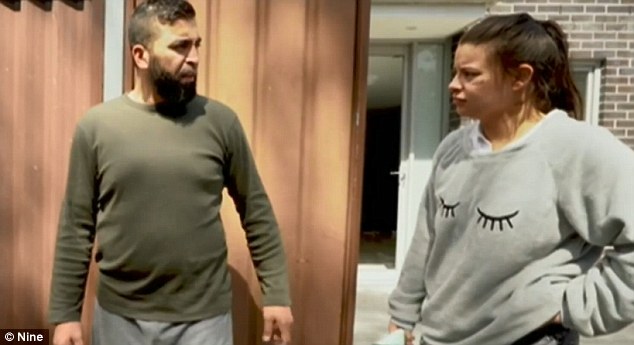 ‘We heard so many shots,’ another said.

Police closed-in on the property at about 2.45pm but it was not until 8.30pm that they eventually stormed the house; ultimately resulting in two arrests.

The couple were taken away and charged after police had broken down the door of the property.

Police had at one point tasered the man.

Despite the evidence found inside, the pair are maintaining their innocence.

They claim they were upstairs asleep during the whole siege and don’t know who owns the allegedly stolen goods that were found in their home.

Both Mohammed and Mikaela have been issued with future court attendance notices for the unrelated offences of intimidation and drug possession.

Police are still waiting for forensic testing before any more charges are laid.