Man, 28, and woman, 36, are spared jail after posting ‘pictures of James Bulger’s killer Jon Venables online’ – as actress Tina Malone waits to hear if she will be punished ‘for re-tweeting photo’

Venables and fellow killer Robert Thompson were given new identities following the murder in 1993 and a court order forbids anyone from making their new names public.

Richard McKeag, 28, and Natalie Barker, 36, were today given suspended jail sentences at the High Court after they admitted publishing information online said to show Venables.

The pair came before court as actress Tina Malone awaits news of a similar case brought against her by the Attorney General. She has yet to enter a plea.

The pair admitted contempt of court after breaching an injunction designed to prevent Venables’ identity being made public. 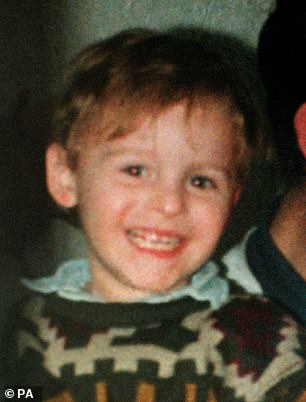 Attorney General Geoffrey Cox QC, who instigated contempt proceedings against McKeag and Barker last year, said after the hearing: ‘These are both serious examples of contempt of court and I instigated these proceedings as it was in the wider public interest to do so.

‘The injunction protects the identities of the offenders, but also innocent individuals who may be wrongly identified as being one of the two men and placed in danger as a result.

‘I will review any further contempt of court allegations made to me and hope this sends a message to anyone tempted to do the same thing. Posting this material online is a crime.’

Today’s case came a week after Tina Malone, an actress who has appeared in Shameless and Brookside, posted a series of messages on saying she had been served papers by the High Court over similar allegations.

Malone, 55, allegedly posted the images online just under a year ago. She is due before judges in March.

Last week she tweeted: ‘I need a lawyer ASAP! I’ve been committed to the High Court!’

A later post stated: ‘I’ve had a wonderful day until I opened my front door five minutes ago! The High Court have served me.’

Venables and Thompson, then aged ten, abducted, tortured and murdered two-year-old James in 1993.

Venables was released on licence from prison in 2001 but has been sent back to jail twice, in 2010 and 2018, for possessing indecent images of children.

Jon Venables and Robert Thompson were given new identities following the murder of James Bulger in 1993.

These are strictly protected under the terms of a lifelong global injunction.

It means anyone publishing images or details relating to their identities online could face up to two years in jail.

The law had traditionally been followed by traditional publishers such as newspapers and broadcasters – but since the invention of social media it also applies to Twitter and Facebook.

Proceedings for contempt are brought by the Attorney General, the Government’s law officer with the responsibility of policing contempt.