Georgia state investigators announced on Sunday that they have arrested a 20-year-old man suspected of creating a fake Facebook account and using it post a ‘hoax’ threat against protesters angry over the February killing of 25-year-old Ahmaud Arbery.

The Georgia Bureau of Investigation on Sunday said state police arrested Rashawn Smith and charged him with dissemination of information relating to terroristic acts.

Smith allegedly created a fake Facebook page and used it to make threats against the protesters, WXIA-TV in Atlanta is reporting.

He was taken into custody in Midway, a town about 50 miles north of Brunswick.

Earlier in the day, the GBI said it had ‘been made aware of a Facebook post that contains a threat to future protests related to Ahmaud Arbery.

‘It was not immediately clear if Smith has an attorney who could comment on the charge.

Hundreds of people gathered alongside some 300 bikers in Brunswick, Georgia, on Saturday to honor the memory of 25-year-old Ahmaud Arbery, the unarmed black jogger who was shot and killed by two white men in February.

The bikers were seen earlier on Saturday kneeling at the spot where Arbery was fatally shot on February 23rd by two white men who claim they were making a citizen’s arrest of a man they suspected of a neighborhood burglary.

One of about 300 bikers raises his fist during a memorial gathering in Brunswick, Georgia, for Ahmaud Arbery 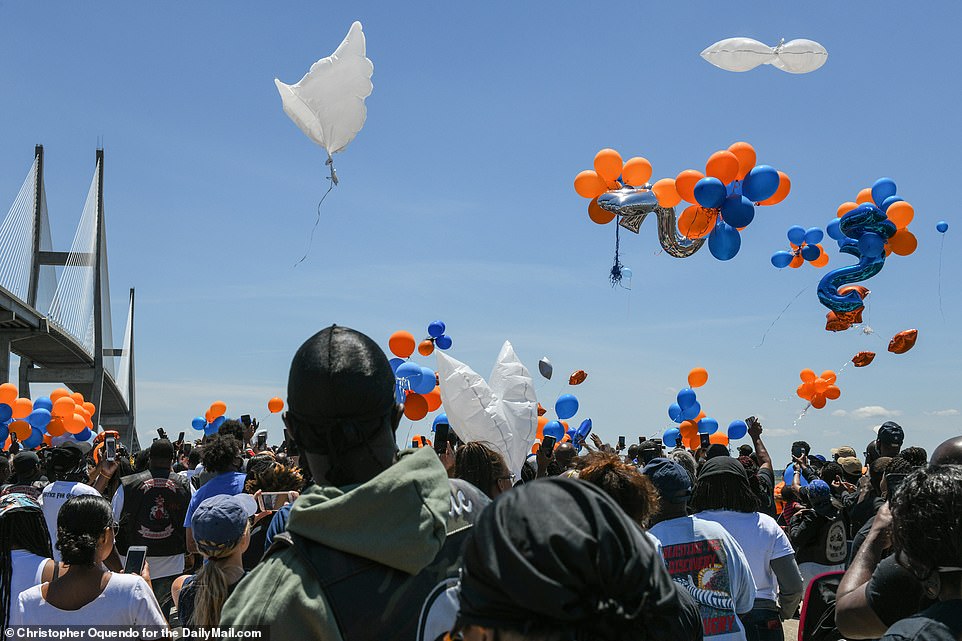 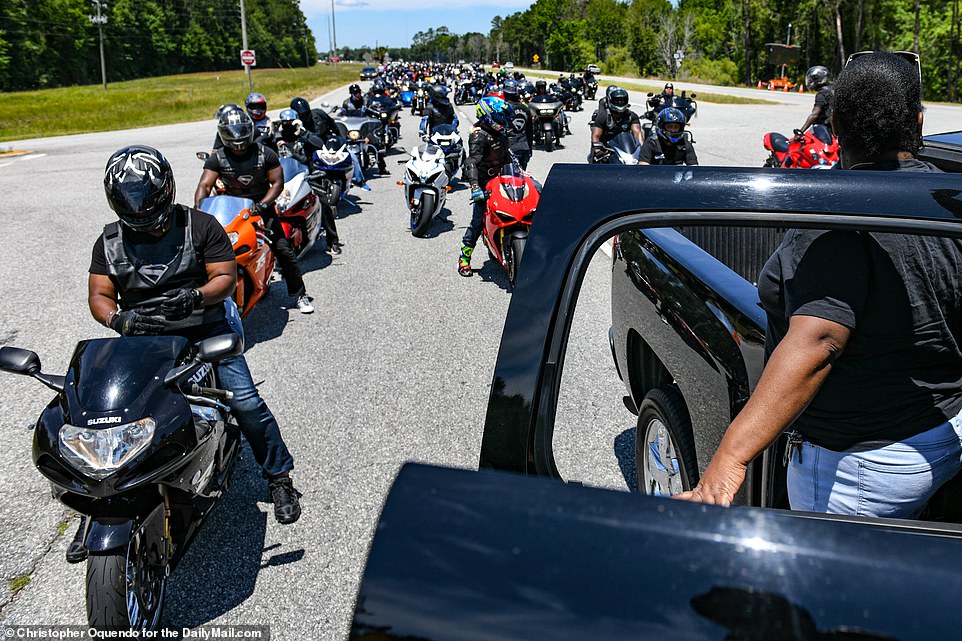 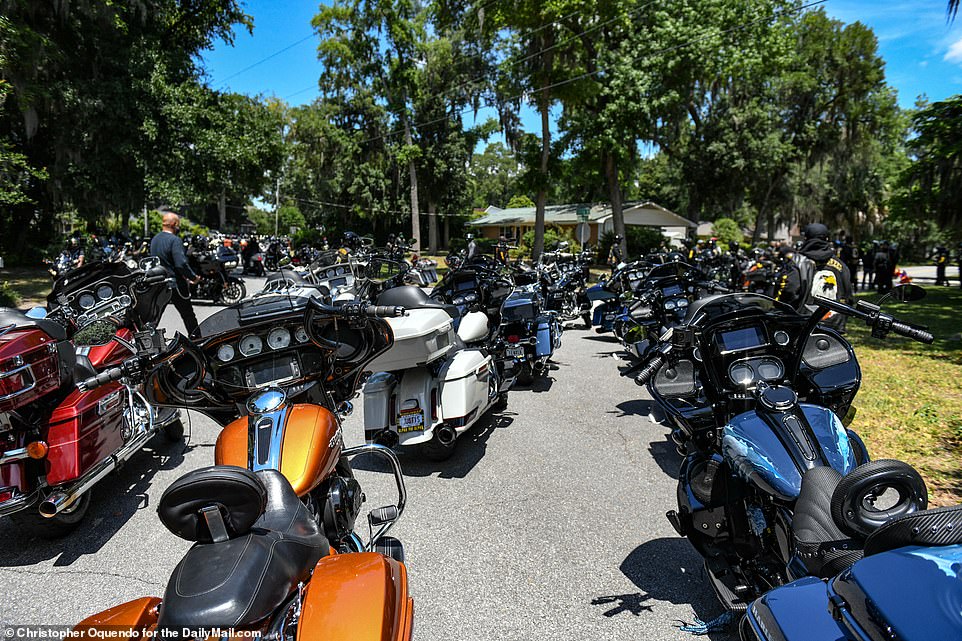 Several of those in attendance near the Sidney Lanier Bridge wore face masks and t-shirts with the phrase ‘I run with Maud’ to commemorate the Georgia man whose killing has sparked outrage nationwide.

On February 23, Arbery was jogging in his Satilla Shores neighborhood just outside of Brunswick when he was accosted by Travis and Greg McMichael.

The father and son had grabbed their guns and gotten into their trucks to follow Arbery when he ran past their home at around 1pm on that day.

Local prosecutors declined to bring charges against the two men, who told investigators they suspected Arbery was a burglar and they were detaining him.

When Arbery resisted, he got into a scuffle with Travis McMichael, who had gotten out of his truck with his weapon and approached the jogger.

Arbery was then shot during the scuffle. 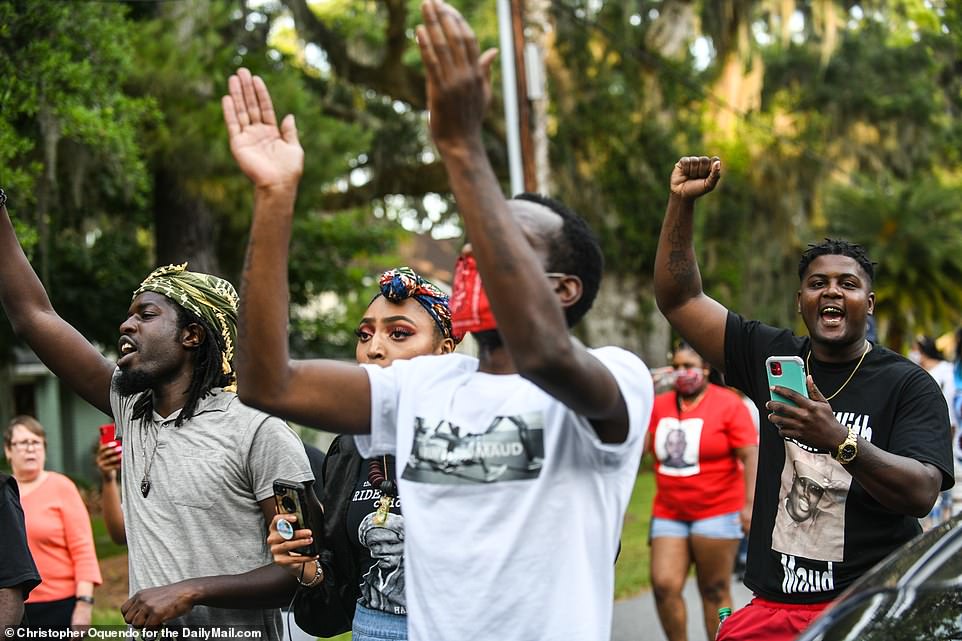 Protesters are seen on Saturday walking the streets of Satilla Shores, the neighborhood near Brunswick wear Arbery was killed 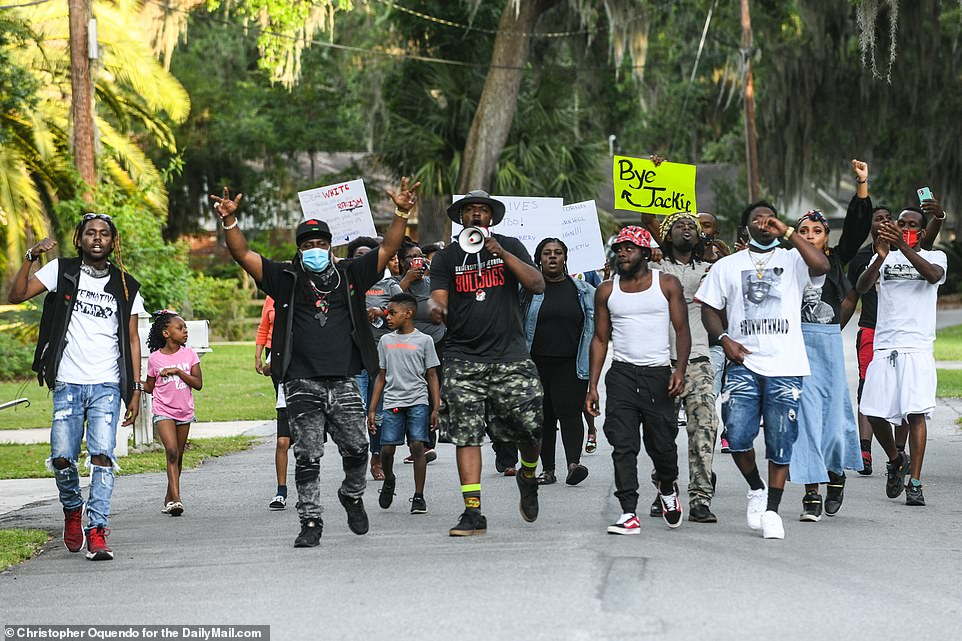 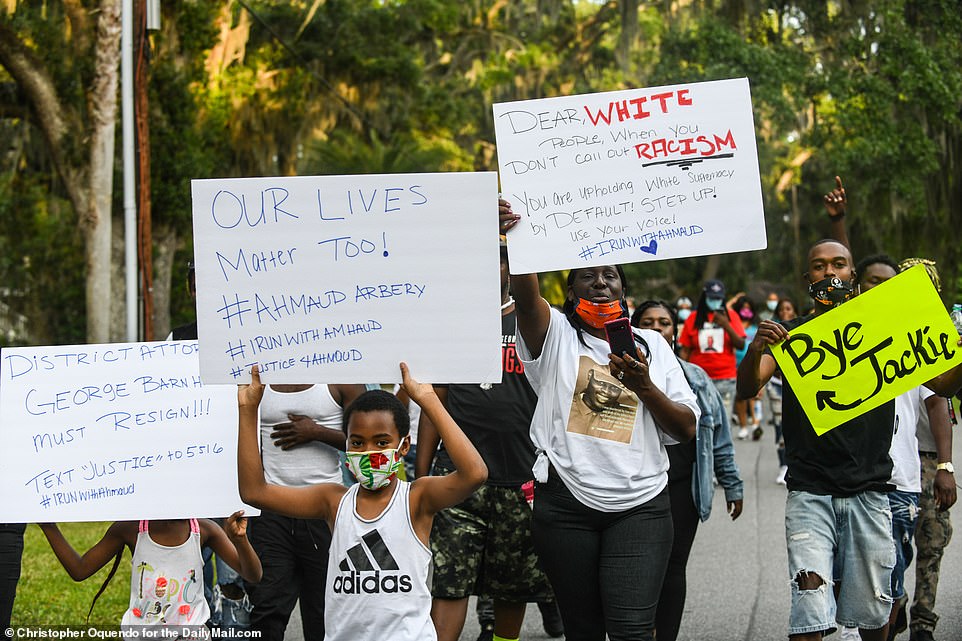 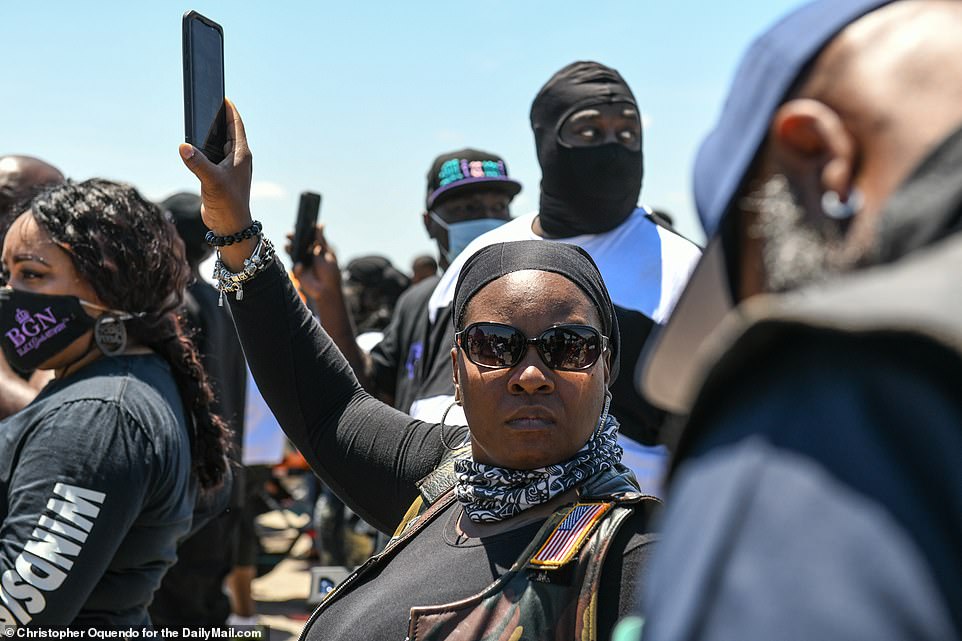 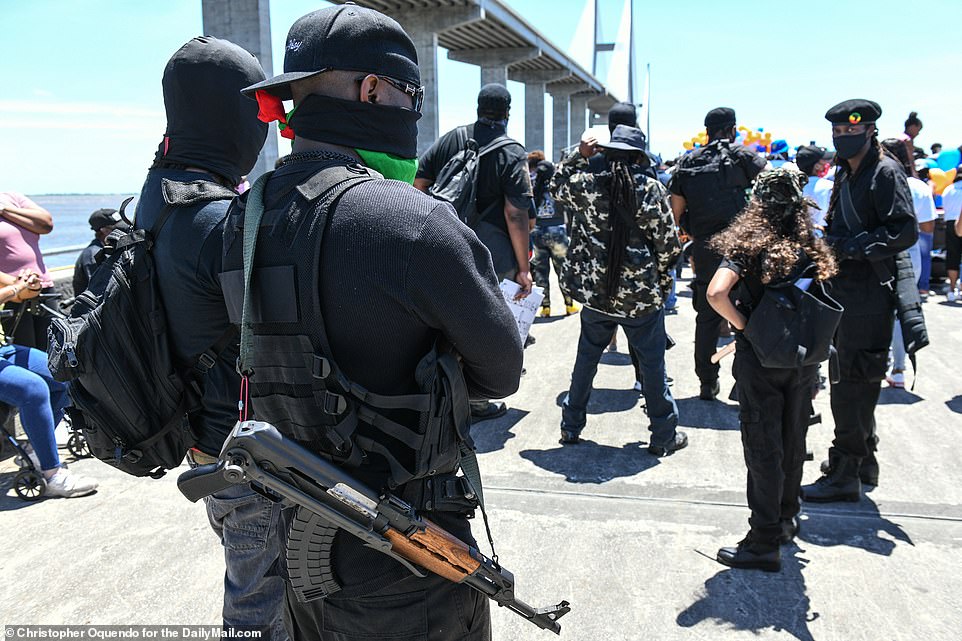 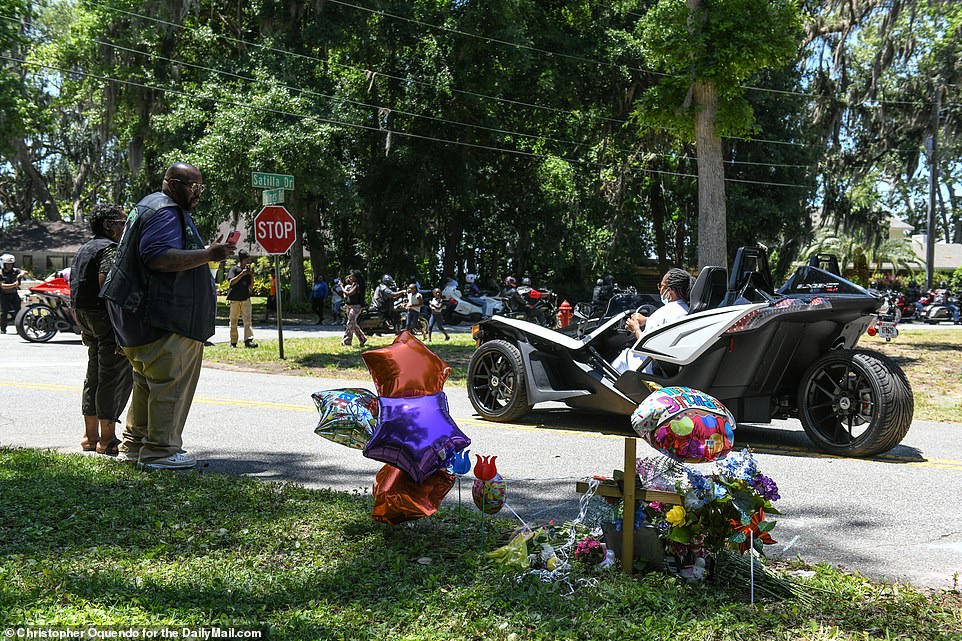 Video emerged on social media showing the fateful moments when Arbery was shot and killed.

After video surfaced, the Georgia Bureau of Investigation took over the case. On Thursday, GBI officers arrested the McMichaels, who have since been charged with homicide and aggravated assault.

But the case has ignited outrage as local officials have been trying to explain why it took more than two months to charge two men whose actions resulted in the death of an unarmed person.

The memorial ceremony on Saturday was held just a day after protesters gathered at the same site demanding justice for Arbery.

Georgia’s attorney general on Sunday asked the Department of Justice to investigate the handling of Arbery’s killing.

‘We are committed to a complete and transparent review of how the Ahmaud Arbery case was handled from the outset,’ Attorney General Chris Carr said in a statement.

‘The family, the community and the state of Georgia deserve answers, and we will work with others in law enforcement at the state and federal level to find those answers.’ 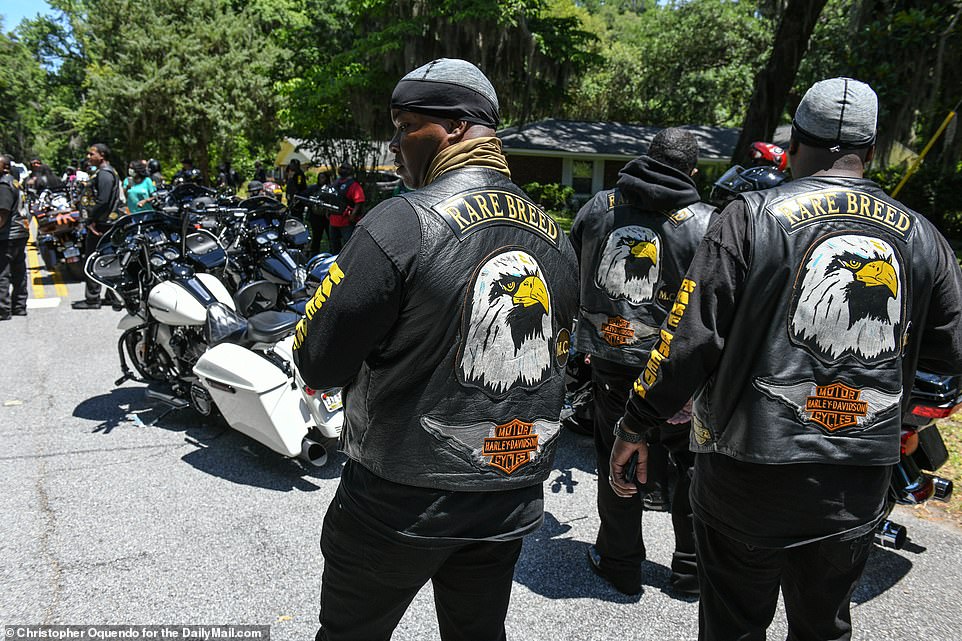 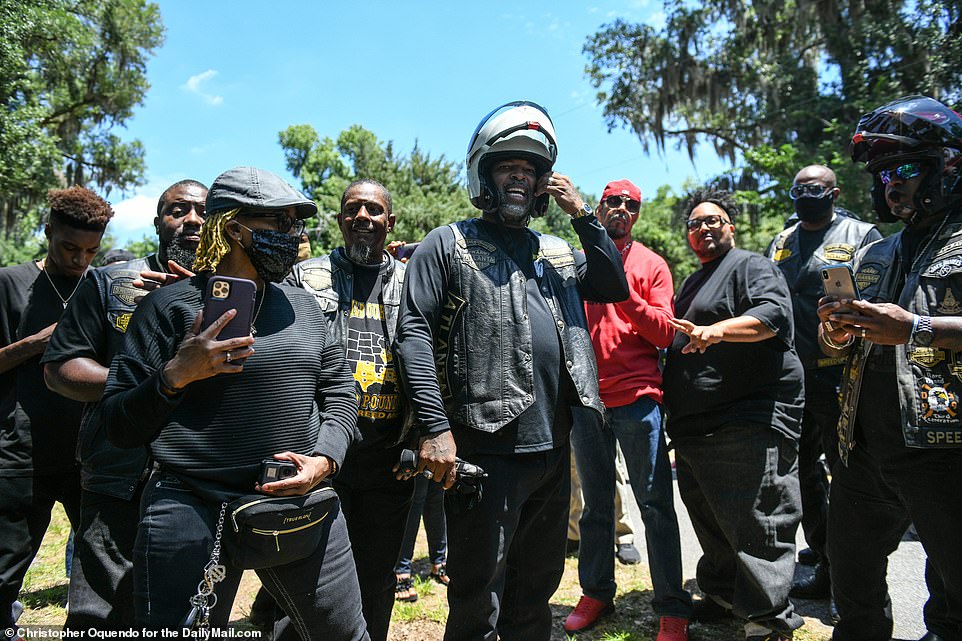 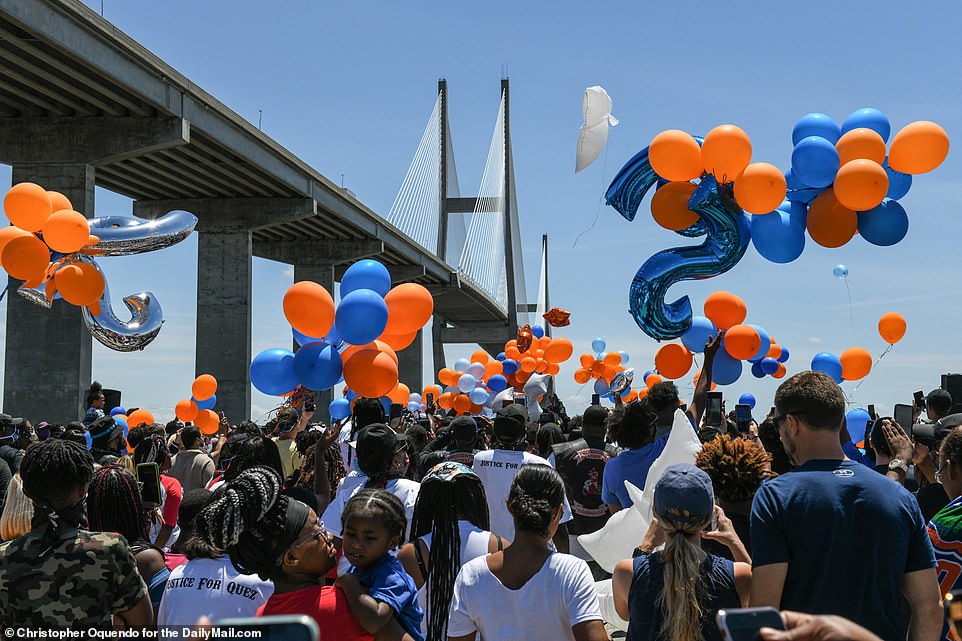 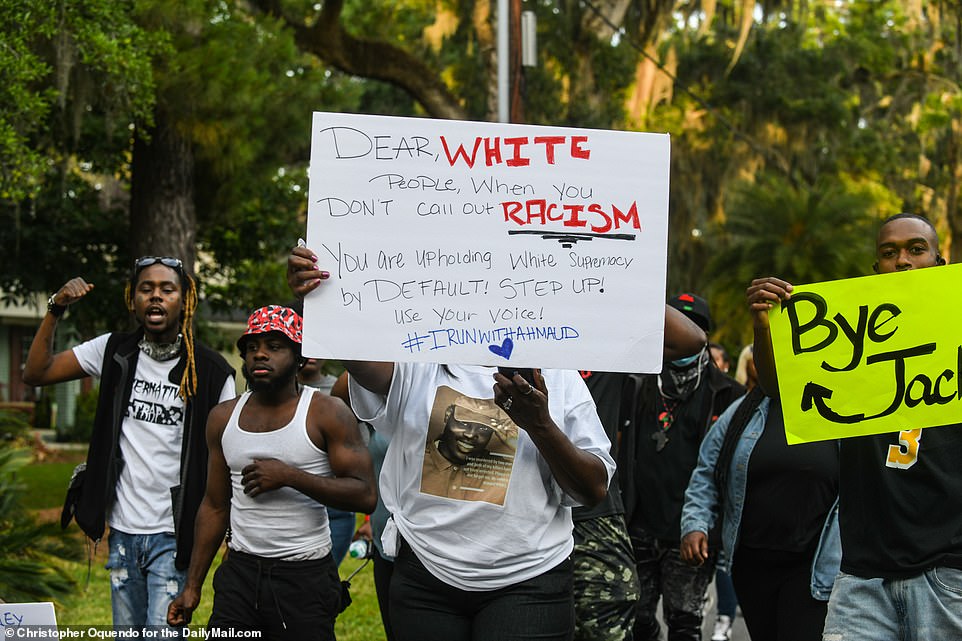 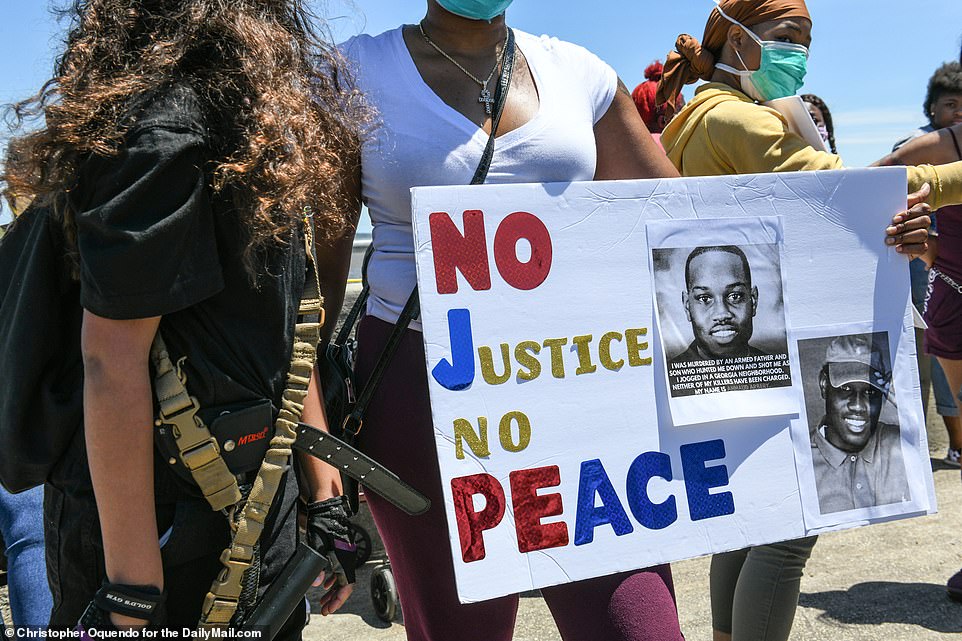 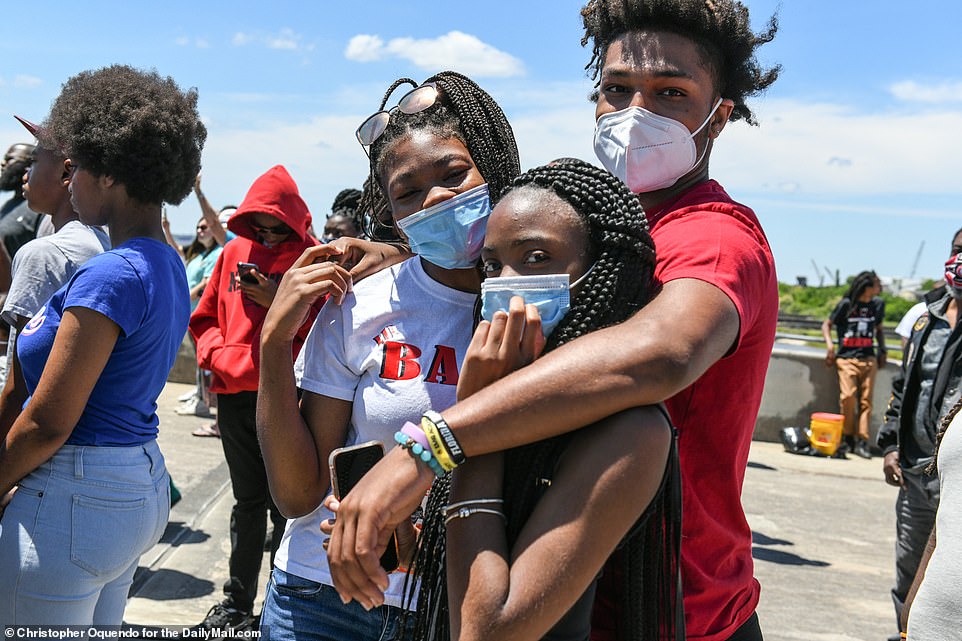 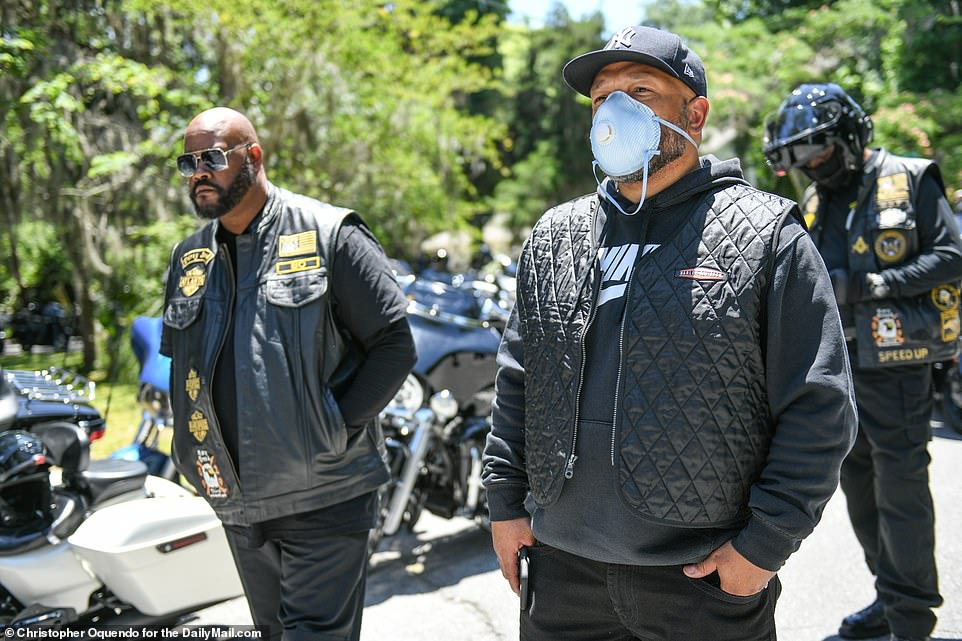 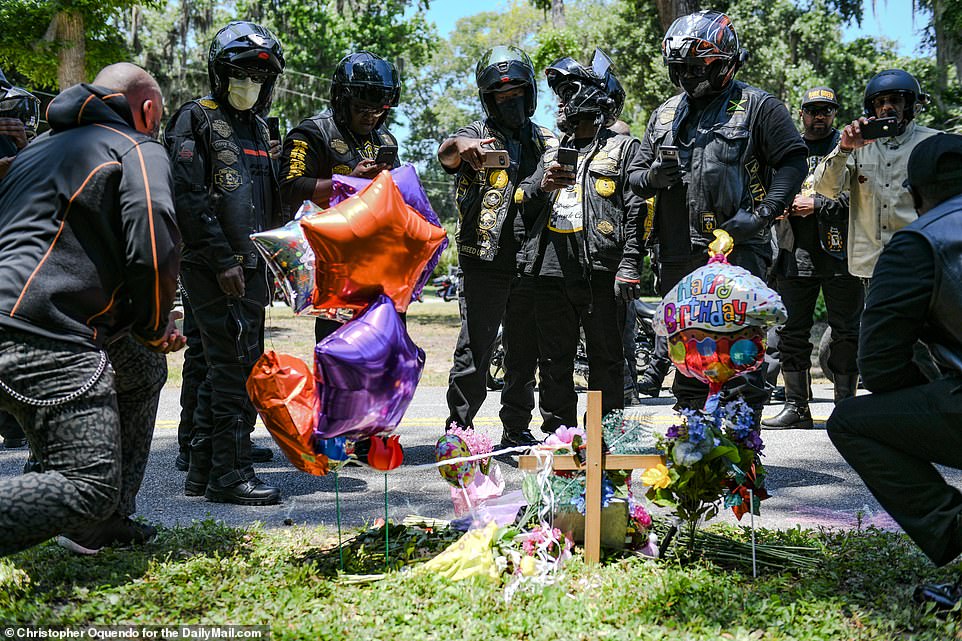 Officials in Georgia also say they are investigating an online threat against people protesting the killing of Arbery.

The Georgia Bureau of Investigation on Sunday said that it ‘has been made aware of a Facebook post that contains a threat to future protests related to Ahmaud Arbery. We are actively investigating this situation and will provide pertinent updates as necessary.’

The social justice arm of Jay-Z´s Roc Nation entertainment company on Sunday called on Georgia officials to take quick action in the case.

Shortly after the video’s leak, Gregory McMichael, 64, and his son Travis McMichael, 34, were arrested and charged with murder and aggravated assault.

The arrests came hours after officials asked the GBI to start investigating. The inquiry was previously in the hands of local officials.

The father and son said they thought Arbery matched the appearance of a burglary suspect who they said had been recorded on a surveillance camera some time before. 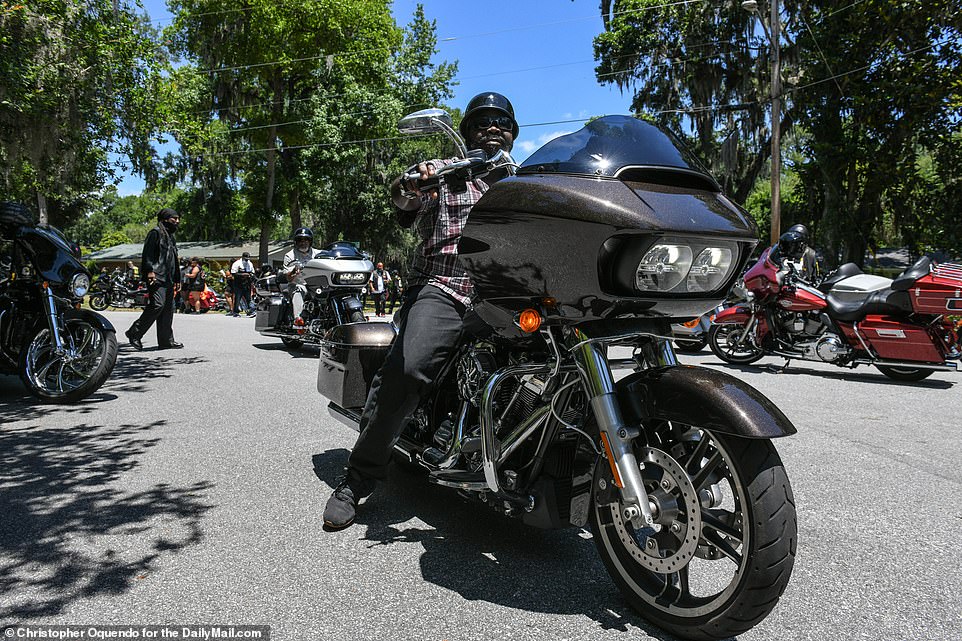 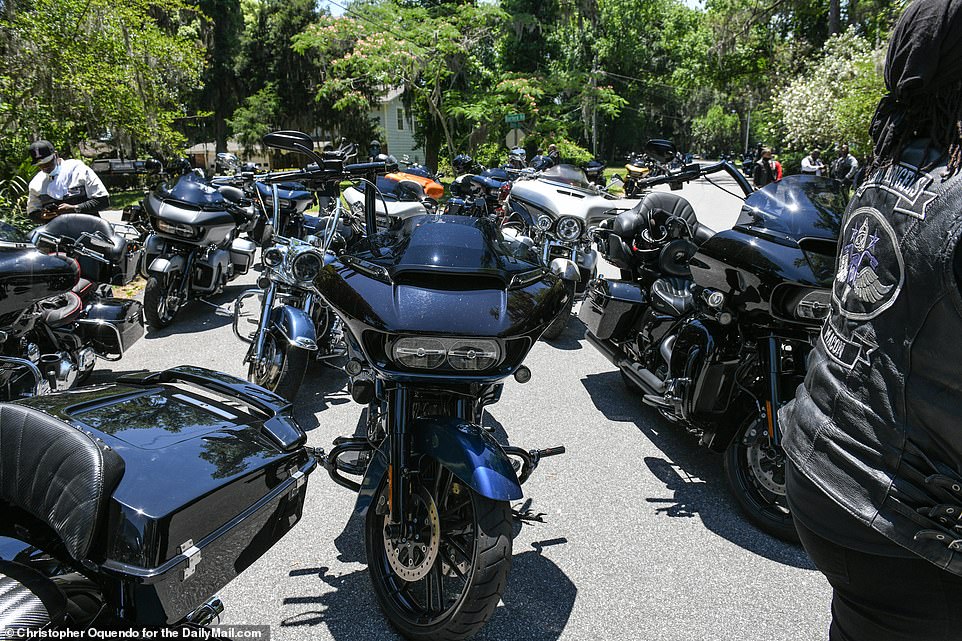 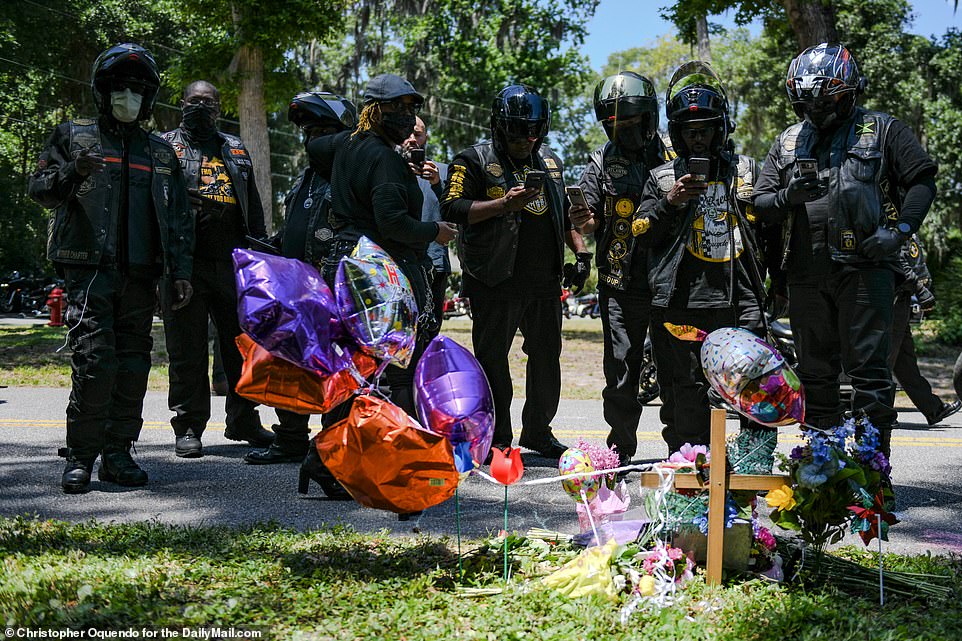 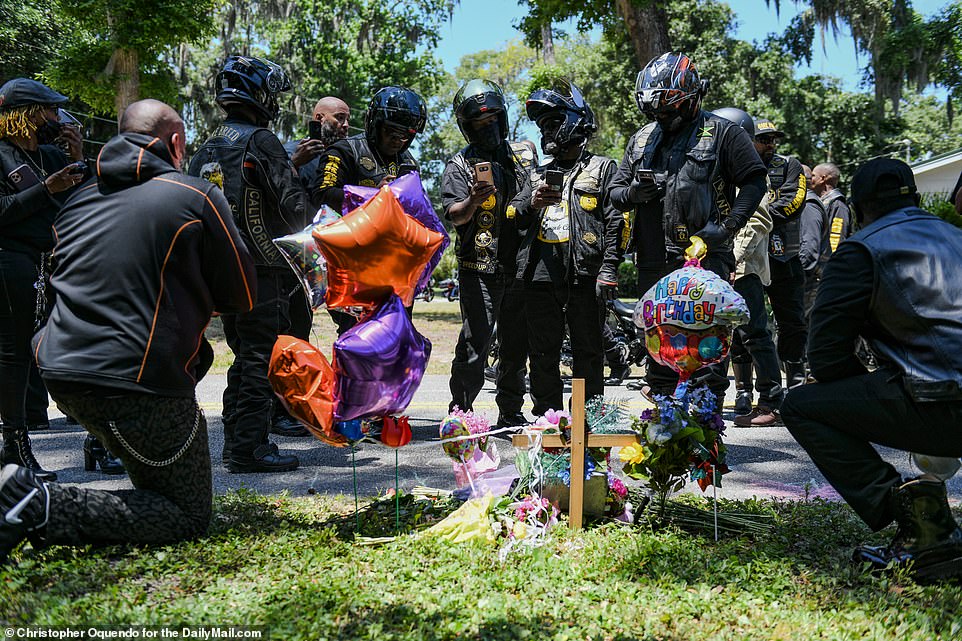 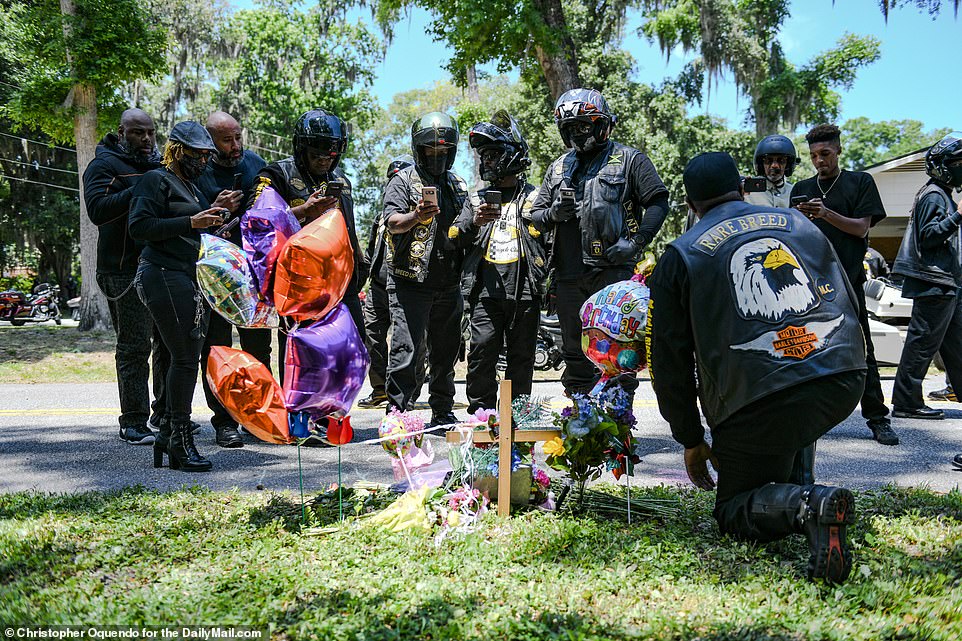 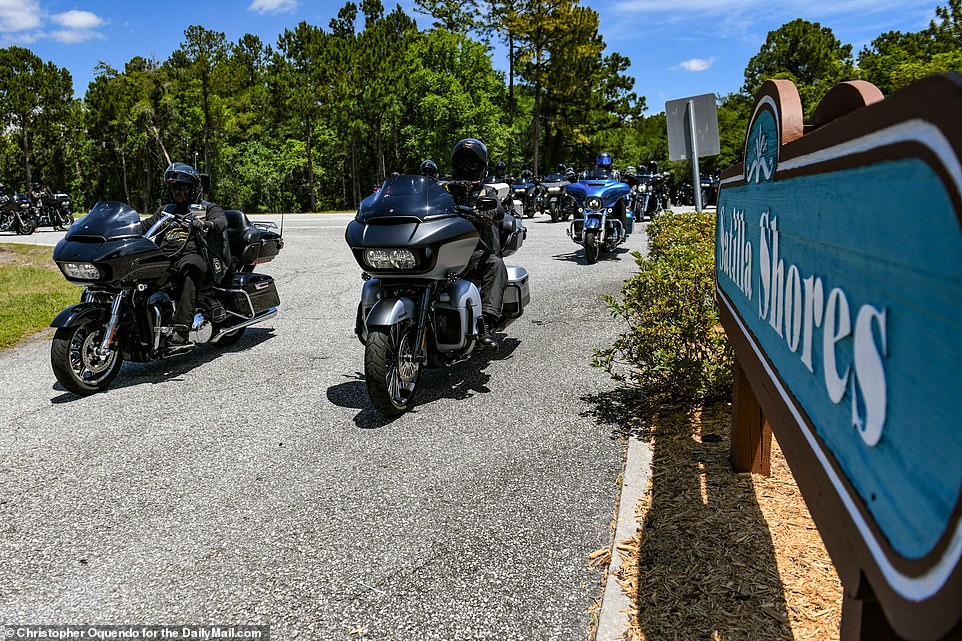 Arbery’s mother, Wanda Cooper Jones, has said she thinks her 25-year-old son, a former high school football player, was just jogging in the neighborhood before he was killed.

On Saturday, the GBI confirmed that it has obtained other photos of video that might shed light on the case.

The Atlanta Journal-Constitution published footage from a surveillance camera at a Brunswick home near where Arbery was shot that shows someone who appears to be Arbery walking into a home under construction.

Arbery then came back out and ran down the street.

Someone else comes out across the street from the construction site, and then a vehicle drives off farther down the street, near where Travis McMichael lives.

Lawyers for Arbery’s family say the video bolsters their position that Arbery did nothing wrong, and shows he did not commit a felony.

Under Georgia law, someone who isn’t a sworn police officer can arrest and detain another person only if a felony is committed in the presence of the arresting citizen.

‘Ahmaud´s actions at this empty home under construction were in no way a felony under Georgia law,’ the lawyers wrote in a social media post.

‘This video confirms that Mr. Arbery’s murder was not justified and the actions of the men who pursued him and ambushed him were unjustified.’

Atlanta mayor calls Ahmaud Arbery’s death ‘a lynching’ and compares it to Jim Crow-era South, as she blames Trump’s rhetoric for giving racists ‘permission to do it in an overt way’

The mayor of Atlanta said Sunday that Donald Trump’s comments have emboldened those ‘prone to being racist,’ leading to an unarmed black man’s death in February.

‘The rhetoric that we hear coming out of the White House in many ways, I think many who are prone to being racist are given permission to do it in an overt way in a way we wouldn’t [otherwise] see in 2020,’ Keisha Lance Bottoms, a Democrat, told CNN’s State of the Union Sunday morning. 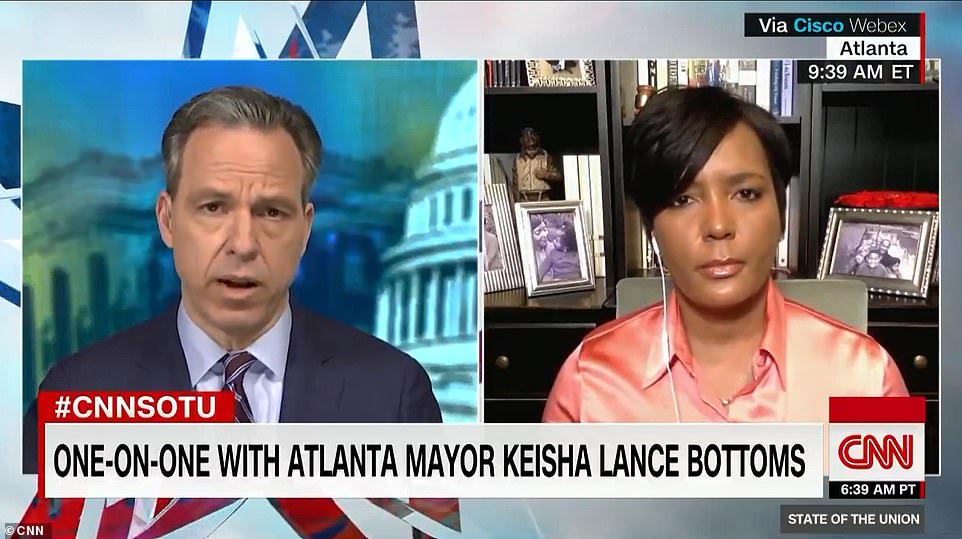 Atlanta Mayor Keisha Lance Bottoms put partial blame on Donald Trump for his rhetoric leading to Ahmaud Arbery’s death. ‘The rhetoric that we hear coming out of the White House in many ways, I think many who are prone to being racist are given permission to do it,’ she told CNN 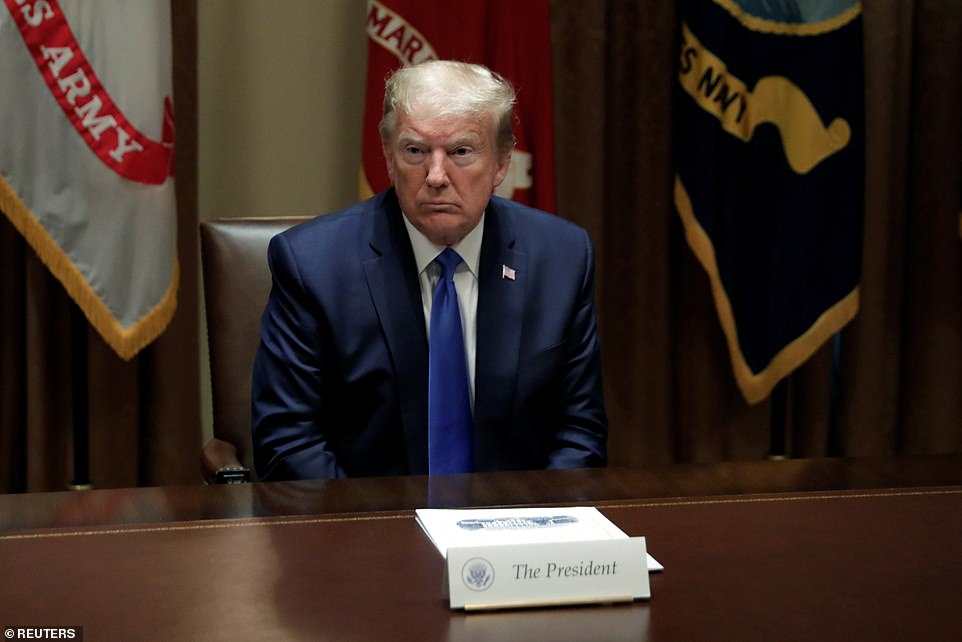 ‘My heart goes out to the parents and the family and friends,’ President Donald Trump said during a call-in interview with Fox & Friends Friday morning

‘My heart goes out to the parents and the family and friends,’ Trump said during a call-in interview with his favorite network. 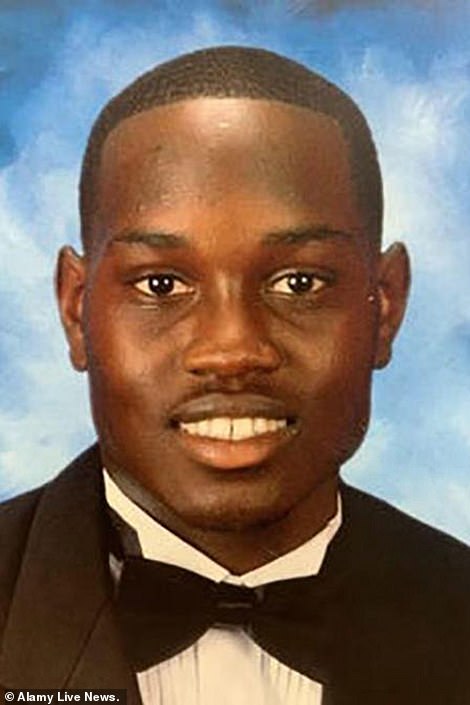 Ahmaud Arbery was a 25-year-old black man who was shot dead by two white men. The incident was caught on camera and circulated social media last week

A video of Arbery being shot and killed circulated social media last week and garnered massive media attention as the Georgia District attorney called for the case to be heard by a grand jury – and outrage ensued over a lack of arrest.

But the father-son duo Gregory, 64, and Travis, 34, McMichael, who are white, were arrested last week.

On Thursday, the McMichael were charged with murder over the death of Arbery – less than three days after cell phone footage showing the incident went viral on social media but more than three months after Arbery’s death.

‘I think had we not seen that video I don’t think they would be charged,’ Bottoms told CNN’s Jake Tapper. ‘It’s heartbreaking. It’s 2020 and this was a lynching of an African American man.’

Several celebrities and politicians have called the incident a ‘lynching.’

Bottoms asserted that it is up to the Department of Justice to step in if the local legal system fails and ‘make sure people are appropriately prosecuted.’

‘But we don’t have that leadership at the top right now,’ she said of the Trump administration with William Barr at the helm of the DOJ. ‘It’s disheartening. I have four kids, three of whom are African-American boys. They are afraid, they are angry.’

White House Press Secretary Kayleigh McEnany was asked Friday during her press briefing whether the DOJ would get involved in the case.

She didn’t rule out the possibility, but suggested it was a state matter.

A Justice Department spokesperson, however, told the BBC that the FBI is already assisting with the investigation.

‘As is standard protocol we look forward to working with them should information come to light of a potential federal violation,’ said the statement. 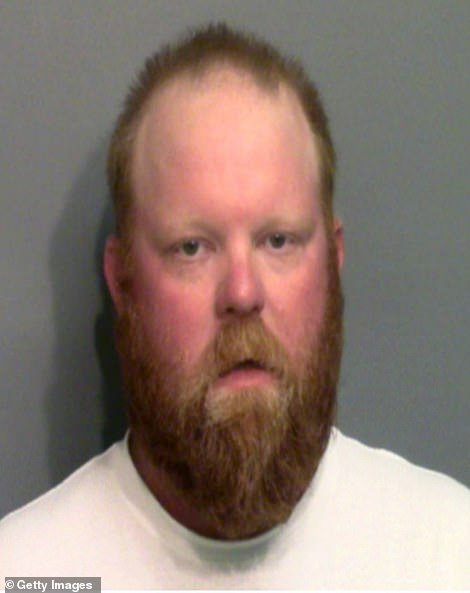 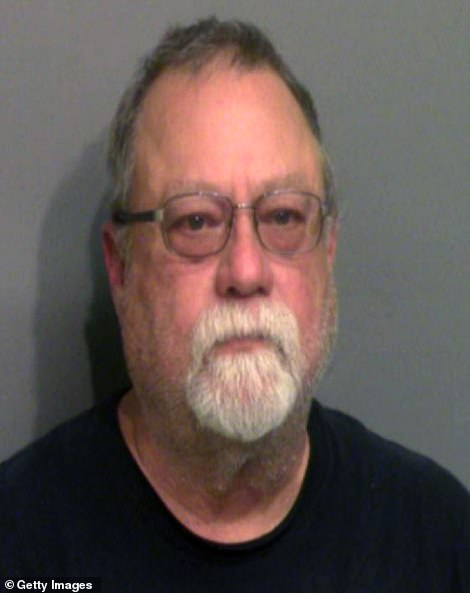 The video, which was released by a local radio station on Twitter after being leaked by a family friend of the McMichael’s, showed Arbery approaching a white truck during what appeared to be a jog through a neighborhood in Brunswick, Georgia.

He appeared to get into a tussle with Travis before being shot and falling to the ground.