A woman was left terrified after a strange man approached her from behind and asked her to ‘role play boyfriend and girlfriend’.

The woman was walking through Cremorne Reserve Walk, in the Sydney’s north, by herself on Monday at around 10am when she felt someone behind her.

‘Then I stopped to put something in the bin and I observed a tall, slim, Caucasian male wearing a cap and a light t-shirt and shorts lurking close by,’ she said.

‘I started to walk away as I felt a hand touch my arm. I jumped out of my skin.

‘He commented that I was safe and that this was a safe neighbourhood.’

The woman, who wished to remain unnamed, said the man remarked that she looked like someone he knew.

‘He then asked if I would engage in a 30 second roleplay conversation acting as boyfriend and girlfriend,’ she said.

‘Weirded out I refused and we both walked away.

‘I felt very uncomfortable and kept checking to see if I was being followed again.’

The woman asked other locals from northern Sydney if they had encountered the same man, and urged women to be safe when walking through the park. 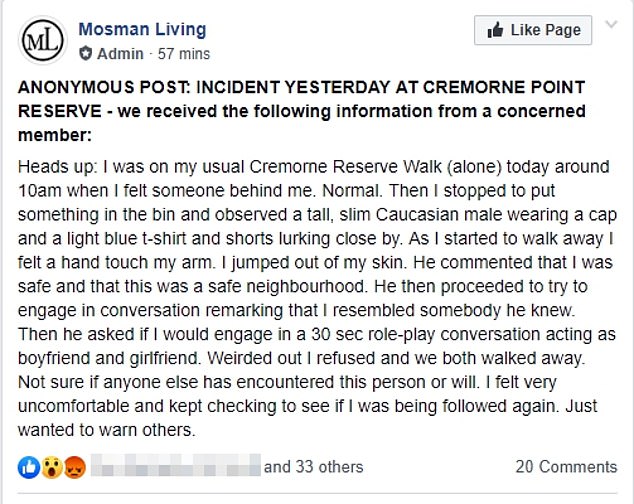