Man believes he is being haunted by a dead child

A man’s massive Twitter thread documenting how he is apparently being haunted by a dead child is going viral.

Adam Ellis of New York recently caught the eye of users after issuing a blunt claim on the social media site reading: ‘So, my apartment is currently being haunted by the ghost of a dead child and he’s trying to kill me.’

The story starts, Adam explained, with a series of very vivid dreams featuring a child with a misshapen head sitting in a green rocking chair at the end of his bed, while he terrifyingly experiences sleep paralysis.

The beginning of the tale: New Yorker Adam Ellis has been documenting the ghostly activity in his apartment for the last three weeks

Shocking: The Twitter user has been charting the activity of the ghost on his account, leaving thousands of people riveted by his story

The signs: Adam revealed that the first time he saw the ghost child, the boy was sitting in a chair in his bedroom

‘For a while he just stared at me, but then he got out of the chair and started shambling toward the bed,’ he said. ‘Right before he reached my bed, I woke up screaming. ‘

A few nights after that horrifying experience, he dreamed of a girl approaching him in a library telling him that the boy he met was called ‘Dear David.’

‘He’s dead. He only appears at midnight, and you can ask him two questions if you said “Dear David” first,’ Adam claims she said. ‘But never try to ask him a third question, or he’ll kill you.’

Adam was confronted again with David in his dreams soon after and questioned him about how he died, learning it was an accident in a store that saw someone push a shelf onto his head. 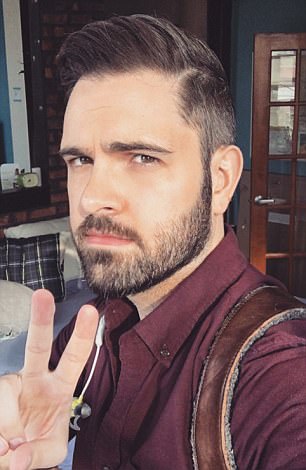 Victim: Adam has been enthralling Twitter users with his spooky ghost story

He mistakenly asks a third question before waking up petrified. He researches online looking for boys who died in stores in the city but finds nothing.

Adam eventually moves into a larger apartment upstairs from his own and months go by without any sight nor sign of Dear David until suddenly his cats began acting strangely.

‘For the past four nights, my cats gather at the front door at exactly midnight & just stare at it, almost like something is on the other side,’ he said in tweets from earlier this month. ‘Last night I got a weird feeling and looked out the peephole, and I’m dead certain I saw movement on the other side.’

He took photos through the peephole, which she shared with the thread claiming he is ‘certain’ he saw something moving. He also shared a video of one of his cats staring intently at his front door, meowing.

A few weeks later, Adam began another thread explaining various strange things that have been happening to him, including a dream ‘where David was dragging me by the arm through an old abandoned warehouse.’

He woke up with a large bruise on his arm, but assumed that it was the injury that sparked the dream, rather than the other way around.

But then on his way to get coffee he passed a usually busy warehouse that had suddenly been abandoned. In the middle of the room was a single green chair.

He also revealed that faint ‘faces’ have been appearing in photos he has taken and that his cats’ nightly date with the door has become earlier every night. 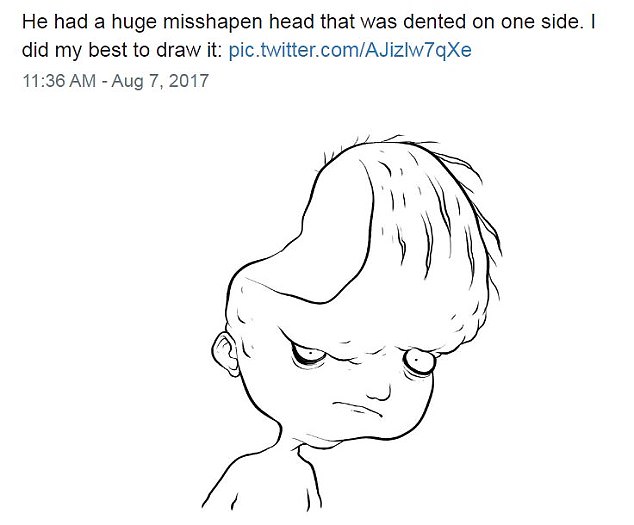 The ghost: In an attempt to reveal just how creepy his phantom is, Adam drew a picture of the child, who he says has a misshapen head

Movement: Adam didn’t seem too perturbed by the first meeting, but that quickly changed

Horrific: He revealed that he wasn’t actually able to move when he first saw the child because he suffers from sleep paralysis

Adam also claims that he has been getting phone calls from an unmarked number and when he answered once he heard the noise of static before a small voice whispered ‘hello.’ Terrified, he hung up the phone.

‘I didn’t know what else to do. I closed all the curtains in my apartment and turned on every single light. I watched TV until dawn because I was too scared to go to sleep. I sort of feel like I’m losing my mind,’ said.

Adam then returned to update followers on his story on Monday night, revealing that he had installed a home surveillance system in order to keep an eye on his cats when he goes on a trip to Japan in three weeks.

‘It’s basically a nanny cam that connects to the wifi, so you can check in whenever you want. It runs 24/7,’ he explained, before adding that the camera actually sends an alert to his phone whenever it detects movement in his apartment.

‘I decided to test it out this weekend. I was away from home one night, so I set up the camera before I left,’ he went on to say.

‘My phone pinged periodically through the evening, alerting me to the cats running around and playing. Normal stuff.’

But then things took a turn for the creepy – once again.

‘Around 11, it alerted me again that it detected motion, but when I checked the feed of my apartment, I didn’t see anything,’ he wrote, before going on to reveal that after checking in on the feed three times, he actually spotted a green chair in his apartment ricking back and forth on its own, sharing the video of the feed on his account so people could see the extraordinary moment for themselves.

‘I knew it couldn’t be the wind, because I haven’t had the windows open at all this summer (I have AC and like to keep it chilly),’ he said, before admitting that he found the entire episode ‘unnerving’ but that he was doing his best ‘not to panic’.

Half an hour later, however, he received another alert, and this time he checked in on the feed immediately. Much to his horror, the clip from the camera showed a souvenir turtle shell that was mounted on the wall above his bookcase suddenly dropping off the wall.

Although he says he has been too nervous to turn the camera on again, he admitted that he moved the green chair into the hallway, and that he was struggling to keep his cool while in his apartment alone.

His final tweet of the evening informed followers that he was ‘taking a xanax and going to bed’, before he signed off for the evening.

Unsurprisingly, Adam’s ghost story has  proved a riveting read for many users, and the first tweet of the thread has been shared more than 50,000 times as well as attracted plenty of ghost-fighting advice from strangers including ‘finding the remains’ of the child and ‘burning them’ or spreading salt around his apartment.