A man fed up of waiting for the council to take action against travellers illegally camping in a car park took matters into his own hands and built his own barrier.

Lee Anderson, who is the Labour councillor for Ashfield District Council in Nottinghamshire, hired a digger and placed two massive concrete blocks by the entrance to prevent the travellers from returning to the spot.

He said he built his own barrier at Strawberry Bank, in Huthwaite, after waiting four weeks for Nottinghamshire County Council, which owns the land, to act.

Lee Anderson, the Labour councillor for Ashfield District Council in Nottinghamshire, hired a digger and placed these two massive concrete blocks to block the entrance of the carpark

The county council has said it appreciates that residents are frustrated by the illegal camp, but does not condone the makeshift barrier.

It also said it is planning on launching a consultation in order to erect a more-permanent deterrent.

Mr Anderson paid for the concrete blocks out of his own pocket. He also hired the digger and moved the blocks into place.

He is refusing to move them until the council puts a permanent barrier in place – a move that he said residents are ‘100 per cent in support of’. 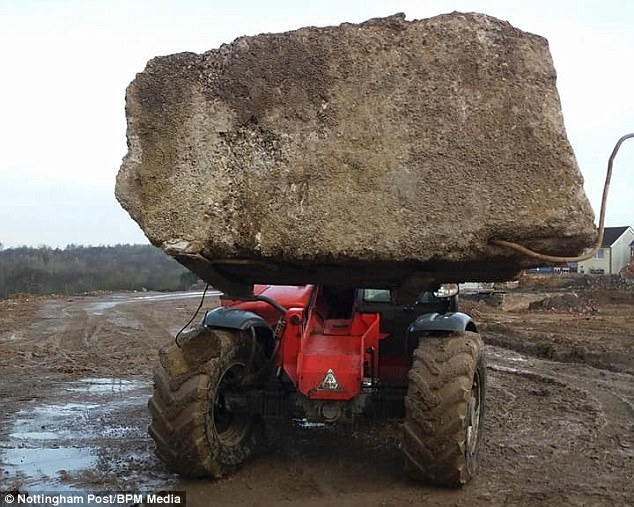 Explaining why took action, he said: ‘They created so much mess, they were burning copper wire, they were running some sort of gardening business, and using bushes as toilets.

‘After a while, they had left that much rubbish that they couldn’t actually live there any more.

‘Ashfield District Council had to clear it up, it cost about £500. But Nottinghamshire County Council, which owned the land, just refused to do anything about it, and that really wound me up.

‘Within two or three weeks they were back, and did exactly the same thing again, leaving excrement and nappies everywhere.

The councillor said he paid for the work to be done himself, and that it cost him a ‘substantial amount of money.’ 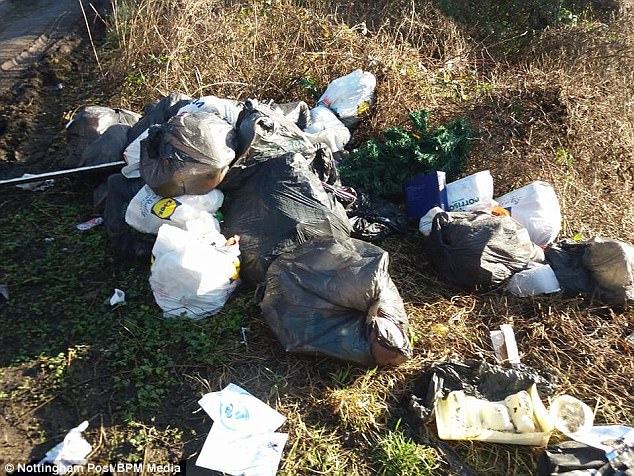 He continued: ‘Ashfield District Council has asked me to move them, and I’ve said no. They have said I have broken the law, and talked about safety issues, but what about the safety issues of the people who live there and have to witness people using bushes as toilets.

‘This is not about a war on travellers, it’s about me being disgusted about our village being used as a toilet and a dumping ground. 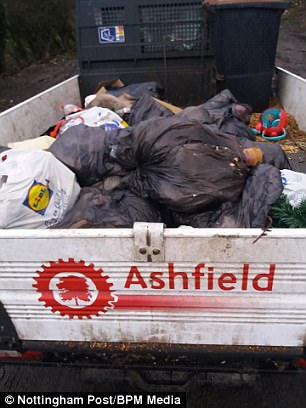 The county council has said it appreciates that residents are frustrated by the illegal camp, but does not condone the barrier

‘Put it this way – if this had been in West Bridgford, it would have been sorted out within 24 hours.’

Gary Wood, the group manager for highways and transport at Nottinghamshire  County Council, said: ‘Nottinghamshire County Council fully appreciates the local frustration which has resulted from the illegal encampment at Strawberry Bank in Huthwaite but, we cannot condone blocking off of the public highway.

‘We will soon begin consulting with residents about the installation of a suitable barrier to allow legitimate access however, this will require a formal Traffic Regulation Order to be put in place.

‘We aim to begin this process on Wednesday, February 7, when an advert will appear in the local press, letters will be issued to adjacent premises and notices will be posted in the vicinity of Strawberry Bank.

‘These adverts and notices must remain in place for a period of 21 days and – if no objections are raised during this period – the order can then come into force.

‘The county council will also seek to erect the barrier as soon as it is feasible to do so.’