Talk about a long and torturous road to walk!

A Virginia man has filmed himself attempting to get a Guinness World Record for successfully walking barefoot over 120 feet of loose Legos – all while raising awareness and donations for a charity that delivers the building block sets to children in hospitals.

Russell Cassevah, of Chesapeake, Virginia, live streamed his efforts to achieve the record for the world’s longest barefoot brick walk on January 21.

Virginia man Russell Cassevah broke the Guinness World Record for barefoot brick walking on January 21, after walking on 200 pounds of Legos spread over a distance of 120 feet 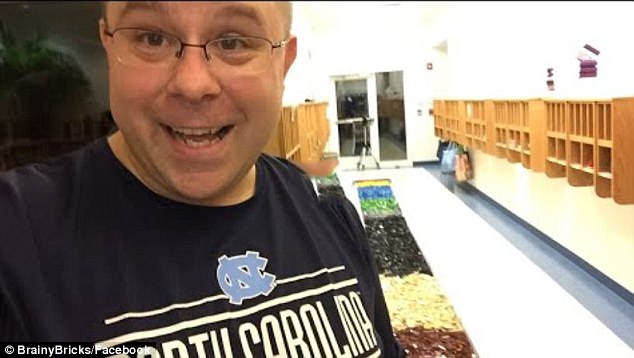 Cassevah made the recording breaking attempt at his daughter’s elementary school, to help raise awareness and funds for British Fairy Bricks, which delivers Legos to children in hospitals

To break the current record of about 85 feet, Cassevah laid out a 120 foot path of loose plastic Legos at his daughter’s Chesapeake Montessori School, adhering to all official procedures and protocols outlined by Guinness, including filming the attempt from multiple angles, professionally measuring the path’s distance and receiving doctor’s exams before and after the painful walk.

Throughout the almost hour-long live stream leading up to and including the walk itself, Cassevah can be seen interviewing the various people involved in making sure his brick walk conforms to Guinness’ protocols and doing giveaways for watchers.

He can also be seen doing a test walk to help get his feet acclimated to the pain that he’ll eventually be experiencing.

During the test, Cassevah notes that he will have to walk the path at a steady pace, without stopping, and that his feet must be in contact with Legos with every step. He laments the fact that they hadn’t thought to do a better job of mixing up the 200 pounds of small and large Lego pieces because the small ones are substantially more painful to tread over.

Cassevah, the mastermind of the BrainyBricks YouTube channel, also explains that the reason he’s attempting to break the Guinness World Record for brick walking is so that he can help raise donations for Fairy Bricks, a British charity that donates Lego sets to hospitalized children.

Last November, Cassevah says, the organization had 2,000 Lego sets stolen from their delivery truck, which was en route to deliver the sets to children throughout the UK.

The use of building bricks at hospitals is a particular asset when it comes to helping children cope with being in unusual situations, being faced with new doctors and big machines, Cassevah notes. 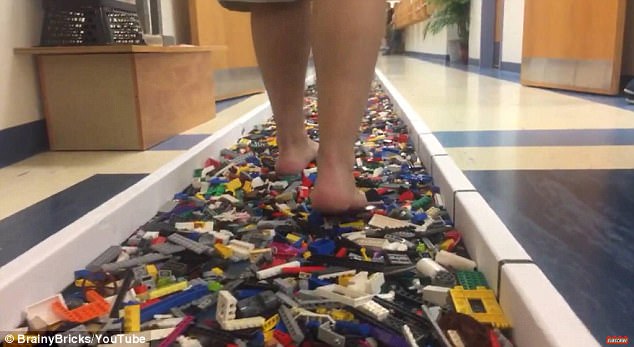 To break the Guinness record, Cassevah needed to travel more than 85 feet, at a steady pace, without stopping, all while walking on painful, loose Lego bricks 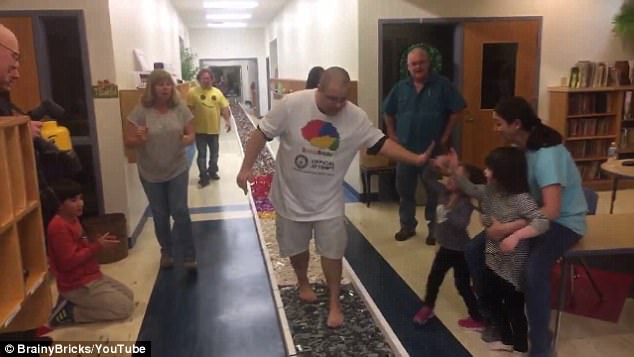 During his long walk, Cassevah grunted with pain and could be seen wobbling at times, as the sharp Legos dug into his feet. He kept his steady pace up, though, high-fiving his cheerleaders

He says that research has shown that engaging in ‘creative play’ with Legos helps kids feel like they’re more in control of their environment and has been proven to assist with both physical and mental rehabilitation.

Shortly before he makes the Guinness World Record attempt, Cassevah submits to an exam from a foot doctor, who checks to make sure that there are no numbing agents or Vaseline on his feet and that he his tootsies have full sensation.

Cassevah asks the doctor what sort of concerns he might have regarding the lengthy brick walk, to which the doctor jokingly replies, ‘First of all, I’d wonder if you need to see a psychiatrist.’

On a serious note, the doctor then says that cuts on Cassevah’s feet and potential injuries sustained should he slip and fall, would be among the concerns.

An exam using a small wheel with needle-like prongs shows that all is normal with the sensation in Cassevah’s feet and the doctor confirms that there are no artificial substances coating his feet. 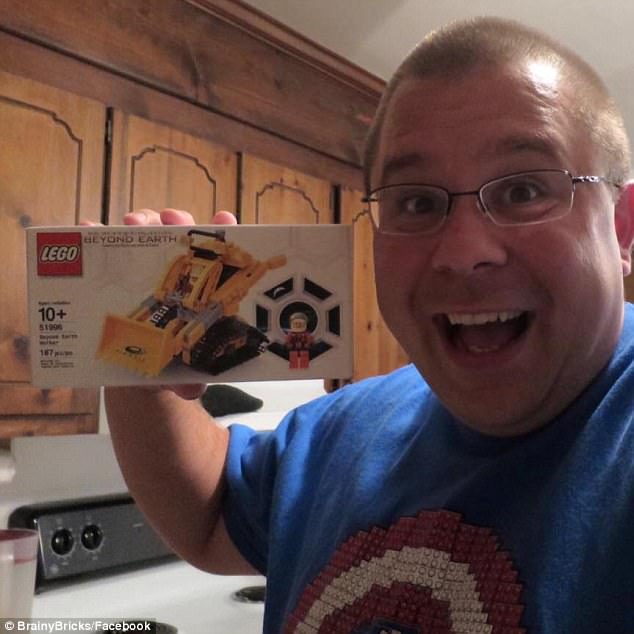 Cassevah is the mastermind of BrainyBricks, a YouTube channel that promotes Lego love 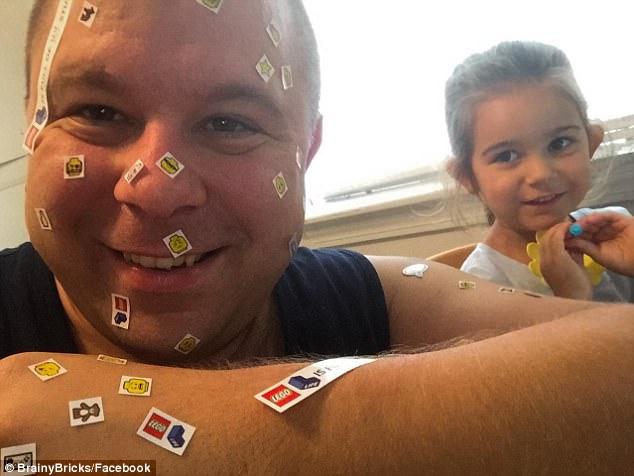 As he’s standing at the start line, preparing to begin the challenge, Cassevah admits to having second guesses about doing the brick walk, but pulls it together for one final shot of the path, revealing that there is ‘no spot where I cannot step on Lego…every single one of these Legos is loose.’

Cassevah is cool and collected as he steps onto the brick path and begins the World Record attempt, narrating as he goes, occasionally questioning the decision to go 120 feet when he could’ve just walked 86 feet to succeed in his quest.

It’s not until about halfway down the path that the pain of thousands of sharp plastic corners digging into his bare feet really starts to affect him and he begins grunting at the pain.

‘I’m just not going to talk, guys,’ Cassevah says, as he concentrates on keeping his pace steady and staying on the path.

Every few steps, though, he can’t help himself from issuing commentary about what is happening.

‘My feet are literally shaking,’ he says, later noting that pieces of brick are stuck to his foot.

Halfway through the challenge, his voice starts to waver and he begins to wobble as he walks, but keeps it together enough that he’s able to high five the children urging him along as he passes by.

Cheers erupt when he surpasses the current 85 foot World Record, spurring him on the last 35 feet to the end of the line.

When Cassevah finishes, he jumps off the path and roars with exuberance.

‘My feet hurt so bad right now guys,’ he says into the camera. ‘My heart is just pounding right now. That hurt so bad.’

When he sits down again, preparing for his post-walk doctor’s examination, he notes that his ‘nose is running like crazy.’

He holds up a trembling hand and says, ‘I’m still shaking guys, that hurt, that really did hurt,’ and appears to wipe away tears.

The intense pain felt by anyone who has ever stepping barefoot on a Lego can be explained by the fact that Legos are made of durable ABS plastic, which does not collapse under body weight pressure, and the approximately 200,000 sensory receptors that are contained in a foot, reports the Mirror.

The doctor then performs the second sensation test on Cassevah and gives the all clear, once again confirming that there were no foreign substances on his feet that could have helped him complete the walk.

Cassevah notes that he believes his barefoot brick walk efforts and the video and photo documentary conform with Guinness’ mandates, meaning that he’s successfully qualified to hold the World Record.

He ends the live stream by thanking all the people who made his brick walk possible and encouraging people to donate to Fairy Bricks.

Cassevah has said that he will be packing up the Legos from the brick path, selling them off in one pound bags. Proceeds will be donated to Fairy Bricks.