A photographer got a shock when he pulled out his camera to take a selfie in a forest on a recent trip to Bali, and saw a monkey wanted to get in the shot too.

Sasha Juliard, 31, was in the Sangeh Monkey Forest, taking photos when he found the cheeky animals were only too willing to take an active part in the shots.

He then decided to try to capture the perfect picture – and spent hours encouraging the monkeys to participate in the shoot. 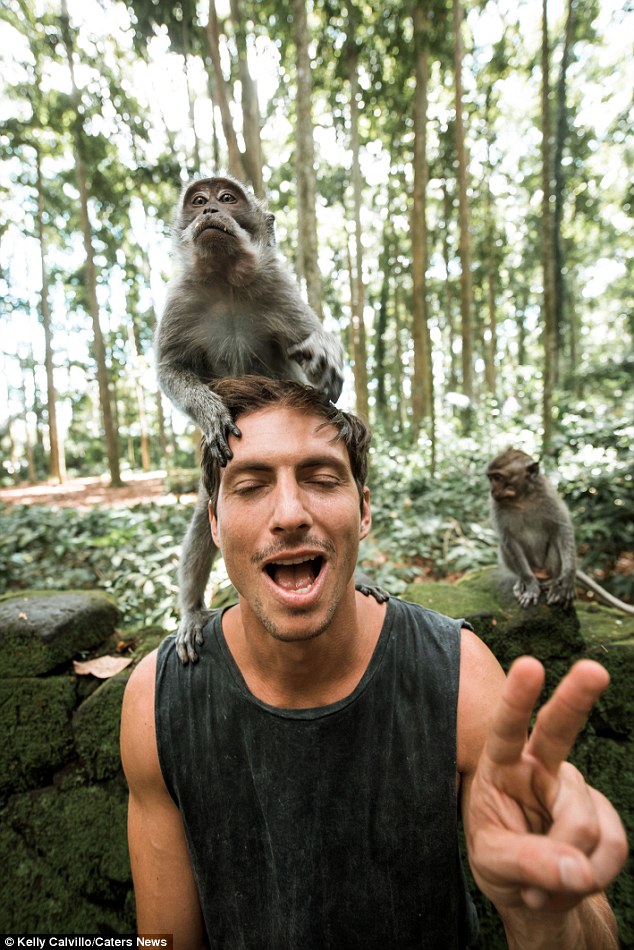 Sasha Juliard poses with a monkey on his shoulder

Photographer Sasha, 31, said: ‘My friend was visiting me in Bali for the week. Of course, I wanted to show her around the island a bit and one must-do stop is to visit some monkeys.

‘We walked around for hours just shooting monkeys doing their thing. At one point I got a photo of a monkey just coming off of a yawn and it looked like a huge grin.

‘After we got into the monkey forest, we spent some time photographing them casually and feeding them bananas and peanuts to get a feel of how they acted around people, cameras, food, eye contact.

‘We learned that these monkeys were fierce around other monkeys when food is involved.

‘It also took some practicing getting used to holding a peanut at the right spot near the lens. This was so the monkey would reach out and give the illusion of him holding the camera.

‘We waited for all the monkeys to clear except one before I crouched down near a wall, Kelly stood in front of me and reached into her pocket, a sign the monkeys had learned was the source of the peanuts, and held one out in front of me. The monkey quickly hopped on my shoulder to get within reach of the peanut and Kelly started snapping away.

‘It was such a fun day feeding, playing and photographing the monkeys. They are so playful but also a bit scary because they can turn on you in a second.’ 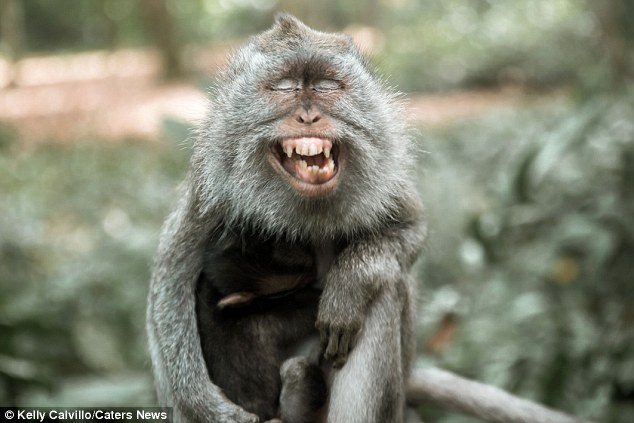 The lucky duo even managed to  snap a laughing monkey