Man, 53, charged with attempted murder after attacking a sheriff’s deputy with a baseball bat leaving him with broken bones when the officer tried to stop him smashing a red light camera

A man who was attacking a red light camera with a baseball bat in San Diego and then taking the bat and striking a sheriff’s deputy is now facing an attempted murder charge.

Frederick Gramcko, 53, was hitting a red light camera with the bat at the intersection of El Camino Real and Encinitas Boulevard at around 2.30pm.

When the yet unidentified deputy tried to arrest him- he was also attacked.

The deputy told Gramcko to drop his bat, and when he refused, he tried to deploy his stun gun on Gramcko but the device malfunctioned, according to NBC 7.

Frederick Gramcko, 53, was attacking a red light camera with a bat in San Diego. When a sheriff’s deputy tried to intervene he was also attacked 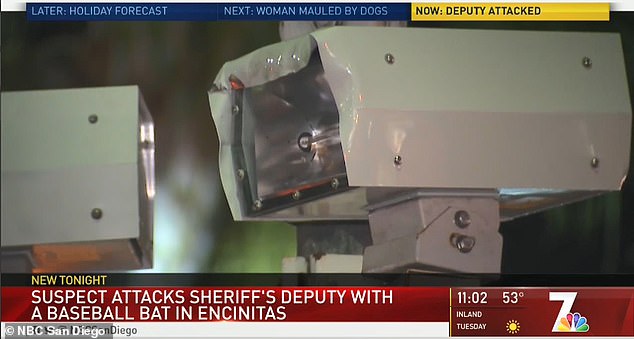 Detective Adrian Moses said that the suspect took several swings at the deputy in an attempt to hit him.

When the deputy took out his baton to try to subdue him, Gramcko ran from the scene, with the deputy chasing after him.

‘When the deputy caught up to the suspect, he turned around and attacked the deputy and a physical altercation between them ensued,’ Moses said. ‘Other deputies arrived on scene and the suspect was ultimately detained and handcuffed.’

The suspect was restrained with a Wrap device, which is a thick nylon blanket that prevents a suspect from kicking and moving around.

He was taken to the hospital for treatment before being booked into the Vista Detention Facility.

The officer suffered several broken bones and was released from Scripps Memorial Hospital Encinitas on Sunday.

Gramcko was charged with attempted murder of a peace officer.