A 67-year-old man accused of threatening to blow up a public school has had an ‘explosive device’ seized from his home in Adelaide.

Police found the device at a North Haven home about 8am on Thursday after they were notified of the alleged threats by Ocean View College, ABC News reported.

Officers investigating the matter swarmed the property where they located what appeared to be a homemade explosive device and further items of interest.

Witnesses described seeing up to 12 officers storm the property before the man was arrested and taken away in an ambulance.

One of the man’s neighbours, Jan Cadd, said police cordoned off the property with crime scene tape before making the arrest.

‘They were positioned all around and I was getting a bit scared [and] worried what was going on,’ Ms Cadd said.

Another neighbour, Michael Lord, told the publication officers remained at the property for the rest of the day.

‘They had it all cordoned off and I had a heard a whisper there was a bomb scare,’ Mr Lord said.

The 67-year-old man was arrested and charged with manufacturing explosives, possessing explosive substances, and crating false belief in relation to a bomb hoax.

He has been refused bail and is currently being treated in hospital and is expected to appear in court in a beside hearing.

South Australian police said in a statement the school provided enough early information, which ensured there was no risk to the school community. 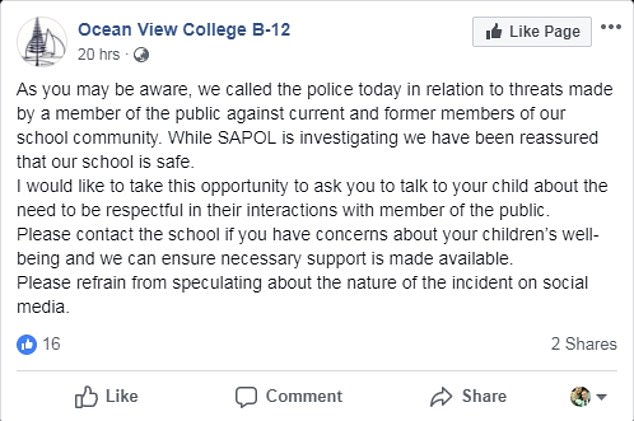 The school posted a message to its Facebook page (pictured), which notified parents of the incident and reassured them that there was never any immediate danger 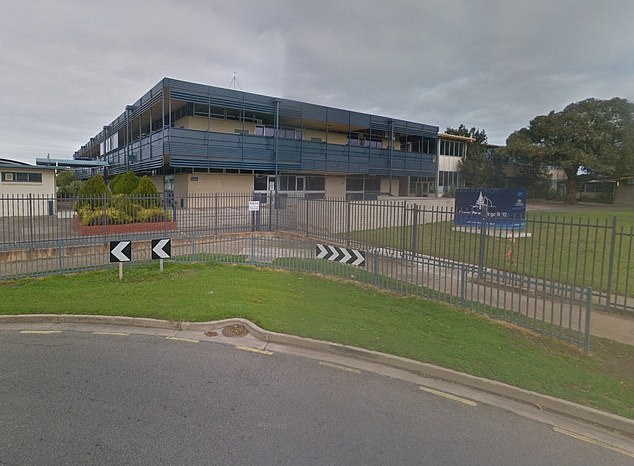 One of the students fathers, who asked to be referred to as just David, told the publication he was confident the school (pictured) was maintaining student safety

The school later posted a message to its Facebook page, which notified parents of the incident and equally reassured them there was never any danger.

‘As you may be aware, we called the police today in relation to threats made by a member of the public against current and former members of our school community,’ the message stated.

‘While SAPOL is investigating we have been reassured that our school is safe.’

The Facebook message urged parents ‘not to speculate’ and to talk to their children about the need to be respectful in their interactions with member of the public.

‘Please contact the school if you have concerns about your children’s well-being and we can ensure necessary support is made available,’ the message concluded.

One of the students fathers, who asked to be referred to as just David, told the publication he was confident the school was maintaining student safety.

‘I do believe the school do everything they can with the children’s safety,’ he said.