A man has been charged with manslaughter in connection with the deaths of 39 migrants found in a refrigerated lorry container in Essex.

Ronan Hughes, of Co Armagh in Northern Ireland, is due to appear at Dublin’s High Court on Tuesday charged with 39 counts of manslaughter, as well as immigration offences, Essex Police said.

The 40-year-old was detained on Monday following the execution of a European arrest warrant in Ireland.

The 39 Vietnamese nationals were found in a lorry container parked on an industrial estate in Grays on October 23 last year.

Ten teenagers, including two 15-year-old boys, were among those found dead.

Meanwhile, Eamonn Harrison, of Mayobridge, Northern Ireland, has been granted permission to appeal against his extradition to the UK under the terms of a European arrest warrant issued by Essex Police.

The 22-year-old is facing 39 manslaughter charges, one of human trafficking and one of assisting unlawful immigration.

A further hearing will be held in Dublin on Thursday May 7, Essex Police said. 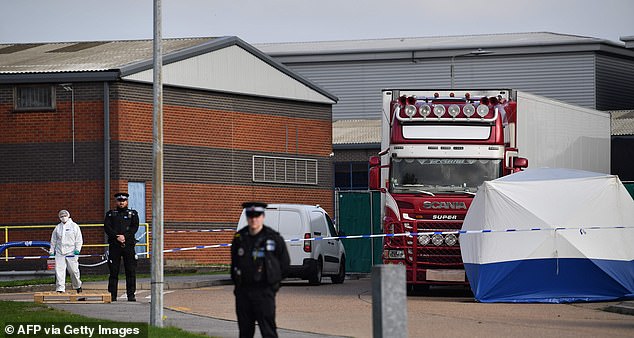 Assistant Chief Constable Tim Smith, head of the Kent and Essex Serious Crime Directorate, said: ‘Our investigation into these matters is ongoing, and we would urge members of the public not to speculate as everyone involved has the right to a fair judicial process.

‘This investigation is one of the largest in Essex Police history and we are working tirelessly to piece together the events leading up to the 23 October 2019 for the sake of the victims and their loved ones.

‘We have worked closely with the National Crime Agency and Crown Prosecution Service as well as police and prosecutors in the Republic of Ireland, Northern Ireland, France, Belgium, the Netherlands, Bulgaria, Germany and Vietnam. 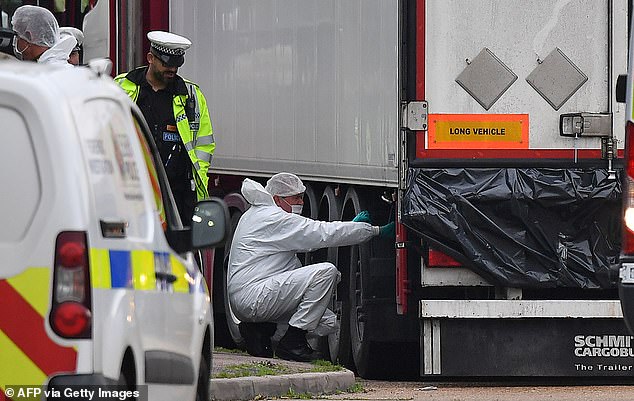 Forensics officers work on the lorry, found to be containing 39 dead bodies, in Essex last year

‘We are immensely grateful for the ongoing support for the investigation, and the victims and their families continue to be at the forefront of our thoughts.’

Gazmir Nuzi, 42, of Tottenham, north London, was arrested in the capital last Friday and charged with conspiracy to facilitate a breach of UK immigration law.

Gheorghe Nica, 43, of Langdon Hills, Essex, was arrested in Frankfurt Airport in January and was charged with 39 counts of manslaughter and one count of conspiracy to assist unlawful immigration.

He previously admitted conspiracy to assist unlawful immigration and acquiring criminal property at the same court on Monday 25 November. The 25-year-old will be sentenced at a later date.