A man has been accused of murder after he shot dead his Florida neighbor on Christmas day after hearing him fighting with his girlfriend.

Jonathan Velasquez, 24, has been charged with murder and was denied bail at a hearing on Thursday for killing Robert Hugh-Patrick Gray, 38, on December 25.

Velasquez was visiting a home he often stays at in Kissimmee on Christmas when he heard two neighboring residents Gray and his girlfriend Taniqua Kales arguing in their backyard. 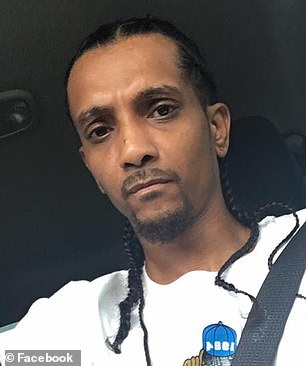 Jonathan Velasquez, 24, (left) has been jailed on a murder charge after he shot dead Robert Hugh-Patrick Gray, 38, (right) on December 25 after Gray was arguing with his girlfriend in his backyard 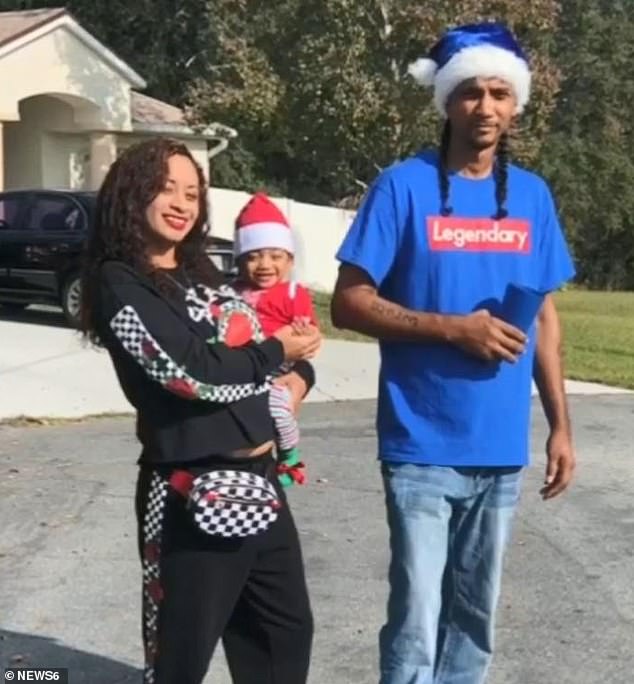 He told deputies he went outside for a drink and saw Kales slap Gray in their backyard and go into their house. Gray allegedly responded by smashing the glass sliding door and entering the home.

He said that he feared the argument would escalate.

Velasquez then ran into the home where he was staying, grabbed his gun, then fired a shot into the ground and ordered Gray to get out of the house, according to his arrest report.

Gray was unarmed and told Velasquez that he was on his own property and he began to walk towards Velasquez, who hid behind a tree in the backyard.

As Gray walked toward him, Velasquez called 911.

When they were about 10 feet apart from each other, Velasquez fired two shots at Gray. 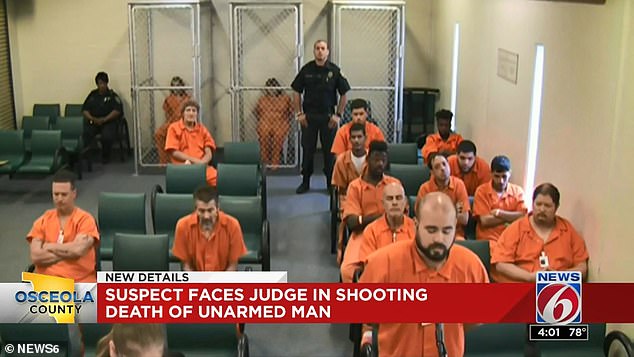 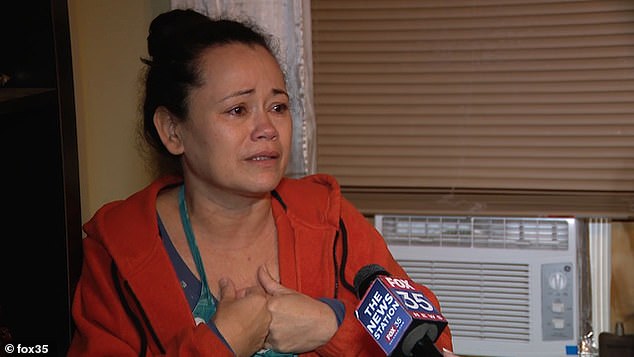 His tearful mother Rosaura Ventos defended her son saying: ‘He thought he was doing the right thing’ and that he hated domestic violence after seeing her deal with it 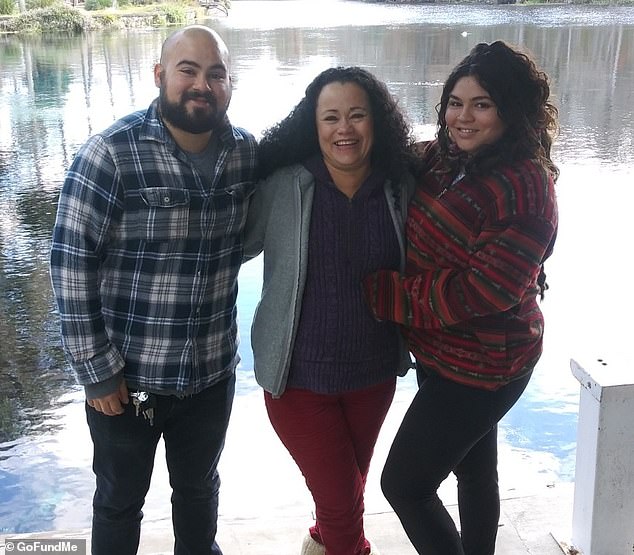 Velasquez pictured left with mom Rosaura center. He told cops that he was not threatened by Gray nor was the neighbor armed, before Velasquez fired two shots

Gray was rushed to Poinciana Medical Center where he was pronounced dead.

Velasquez told deputies he was never threatened and never saw a weapon.

He ‘took it upon himself to retrieve his gun prior to calling 911’, according to the arrest affidavit.

Gray’s heartbroken girlfriend Kales, with whom he shares a 10-month-old son, says that they were not arguing prior to the incident.

‘His side is wrong. We were not fighting and arguing. We was not fighting or arguing at all,’ she said to Click Orlando.

However, records show that Kales and Gray have a history of domestic violence.

Five months ago Gray was arrested by Osceola deputies after his girlfriend called 911 and said he hit her over the head and pulled her by her hair in an argument, according to WFTV.

Kales has since moved away from the home on Montclair Way after the shooting, saying it’s too painful to live there after her boyfriend’s death.

Police released the desperate 911 calls that Kales and a witness made after Gray was shot. However Velasquez’s 911 call hasn’t been released.

In Kales’ five-minute call she says she’s on the floor with Gray.

‘Come, come, come. One of the next door neighbors shot him,’ she said.

‘The guy across the street shot him for no (expletive) reason,’ she added. 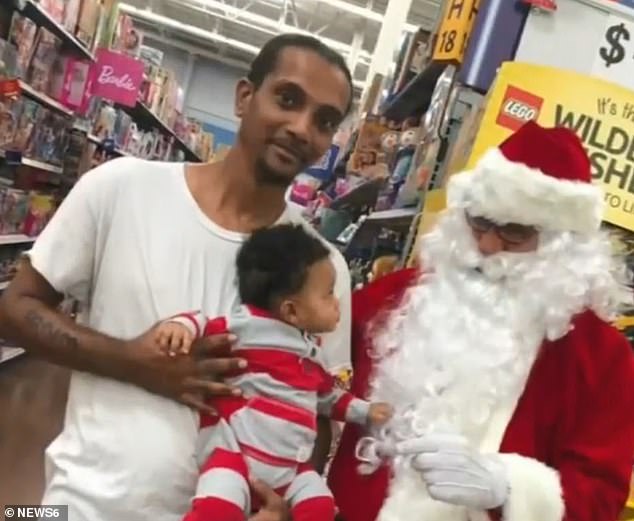 Gray pictured above with his baby on Christmas Eve, a day before he was killed 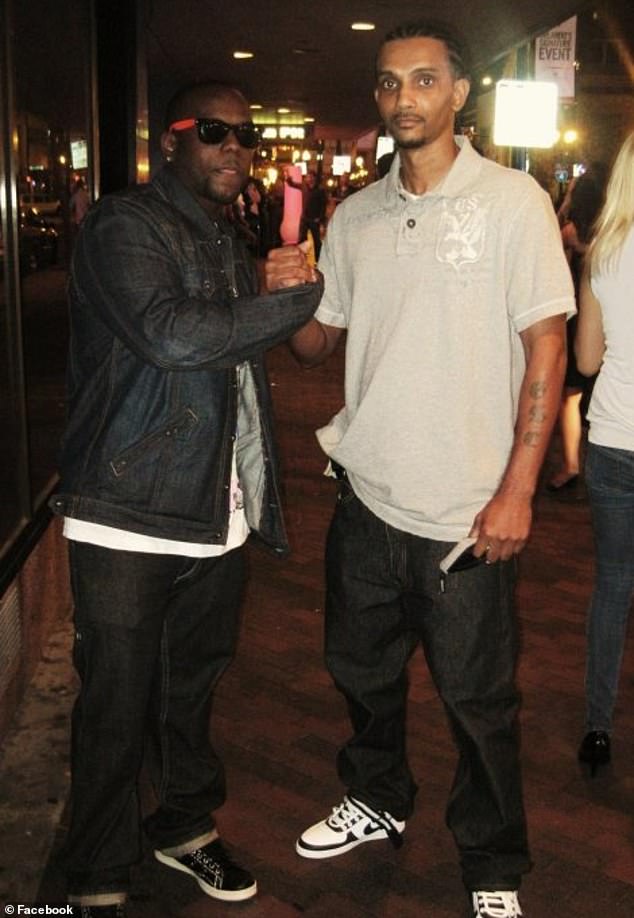 Gray was rushed to Poinciana Medical Center where he was pronounced dead. He was shot twice as he stood about 10 feet away from Velasquez 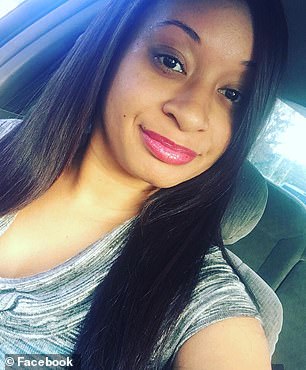 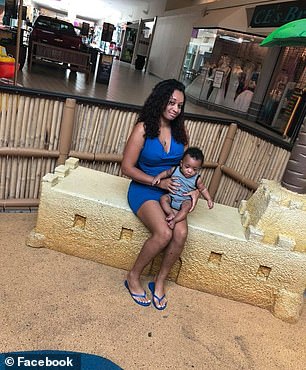 Gray’s heartbroken girlfriend Kales, with whom he shares a 10-month-old son, says that they were not arguing prior to the incident. In July she called the cops on Gray for domestic violence

After the shooting Velasquez remained on the scene and cooperated with investigators.

A GoFundMe page has been created to help cover Gray’s funeral expenses.

At Velasquez’s Thursday hearing he remained silent and said nothing besides his name. A judge ordered him to stay in jail without bond on a murder charge.

Velasquez has been appointed a public defender.

His mother has tearfully defended him as a ‘good kid’ and ‘not a criminal’.

‘I’ve been though domestic violence myself. He does not like it. He hates it. He must have just wanted to help. I don’t think it was his intention to kill anybody,’ mother Rosaura Ventos said to Fox35.

She believes he tried to intervene in Gray and Kales argument after growing up seeing his mom deal with domestic violence.

‘He’s traumatized. That’s what it is. He’s never been in any sort of trouble or nothing… He thought he was doing the right thing, defending the person,’ she said.

‘It hurts me to see the other person lost his son, his child. His children lost his parent, but it could have been prevented by not taking your business outside and scream and yell for help,’ she added.