The record books will show that this game slipped away from Manchester City in the 56th minute, when Mohamed Salah scored and left them needing four second-half goals.

In reality it was probably over some 26 minutes earlier in the evening, when referee Antonio Mateu Lahoz informed Pep Guardiola he would spend the remainder of the game in the stand. There is a reason an orchestra has a conductor.

He does not play a solo, not even an instrument, but he regulates those who do. He sets the tempo, he harnesses the energy of the group. That is what Guardiola does for his players. In his absence, the technical area sat empty, forlorn. 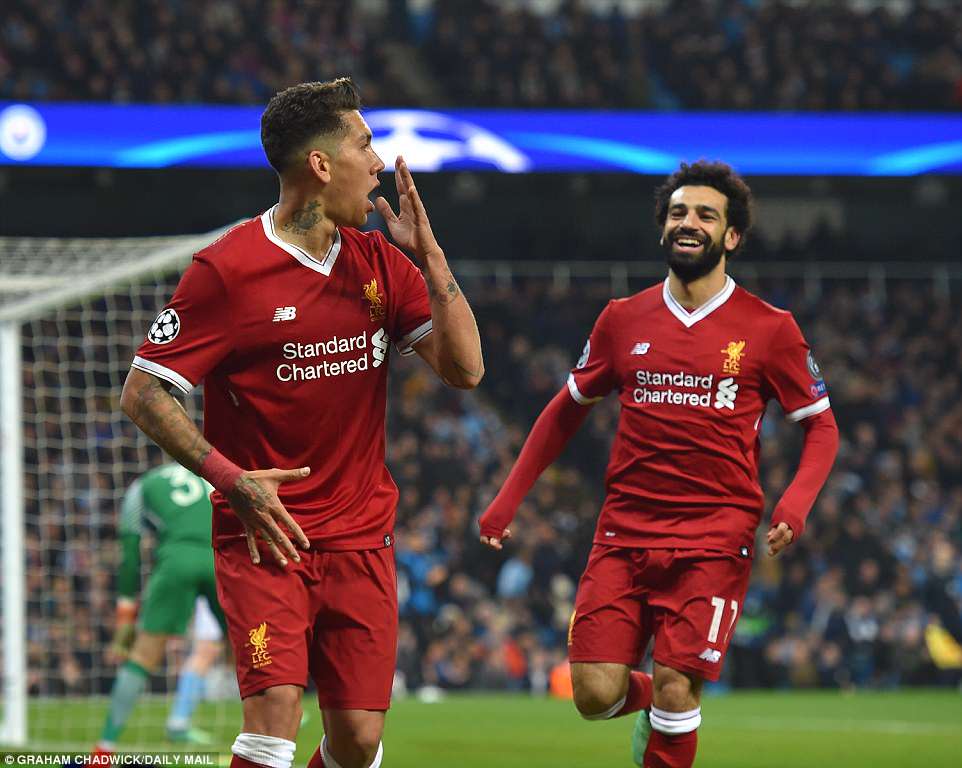 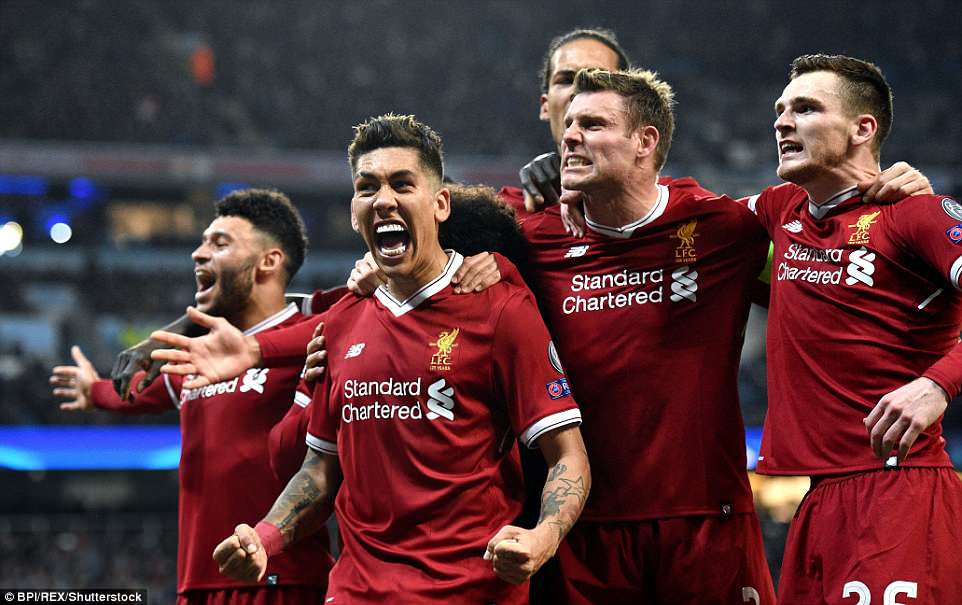 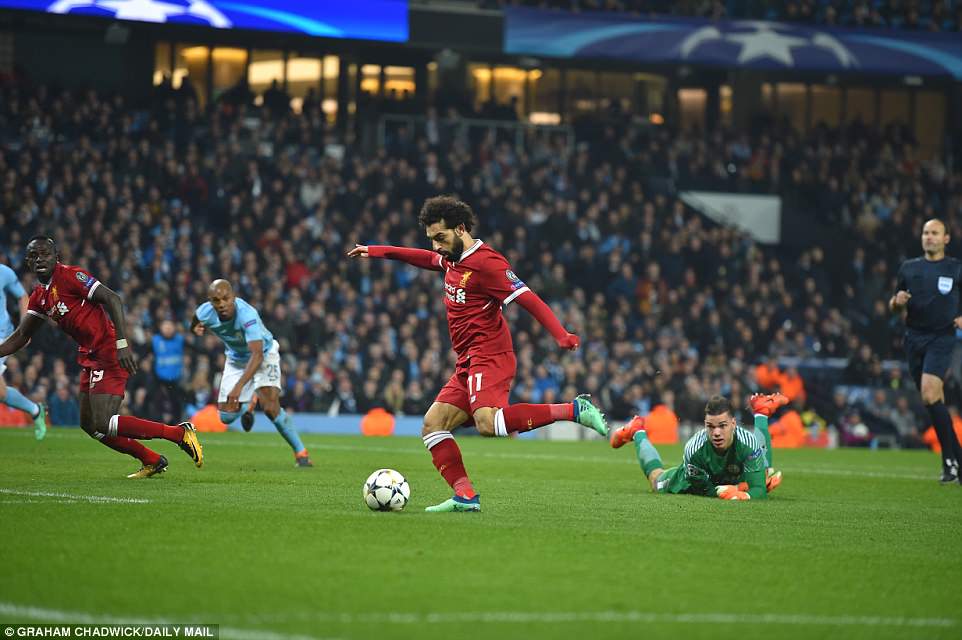 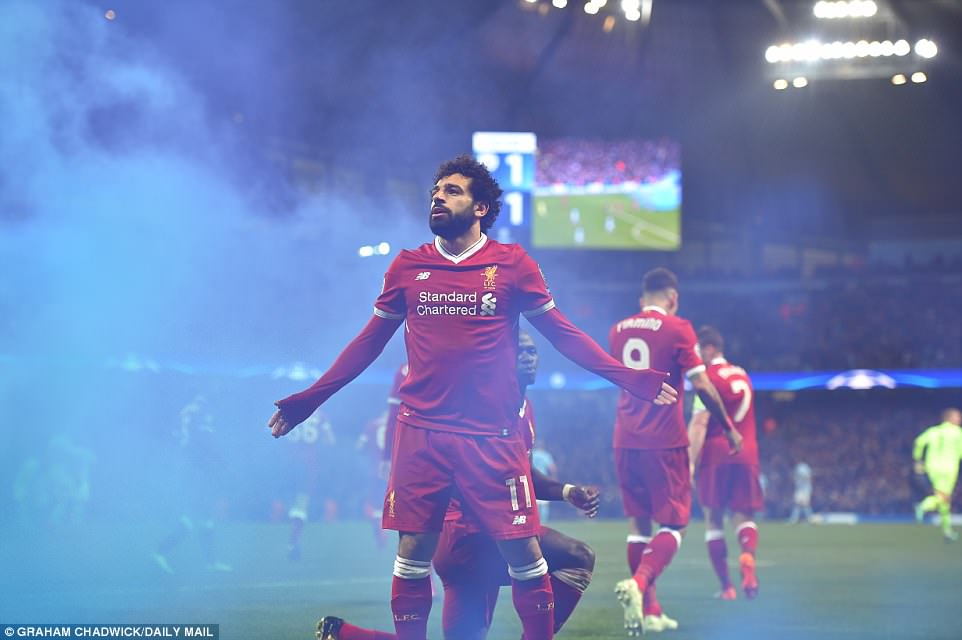 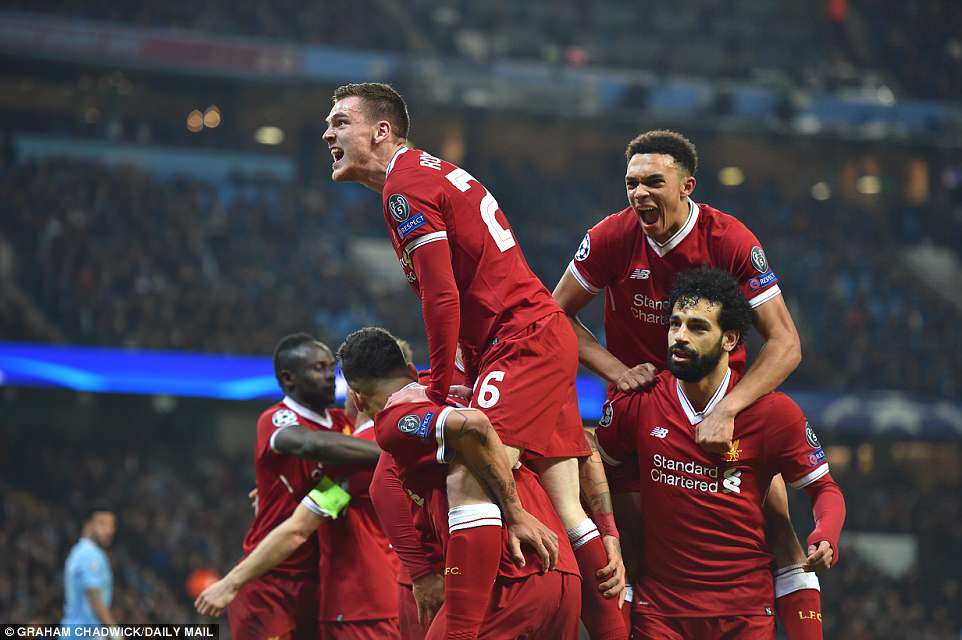 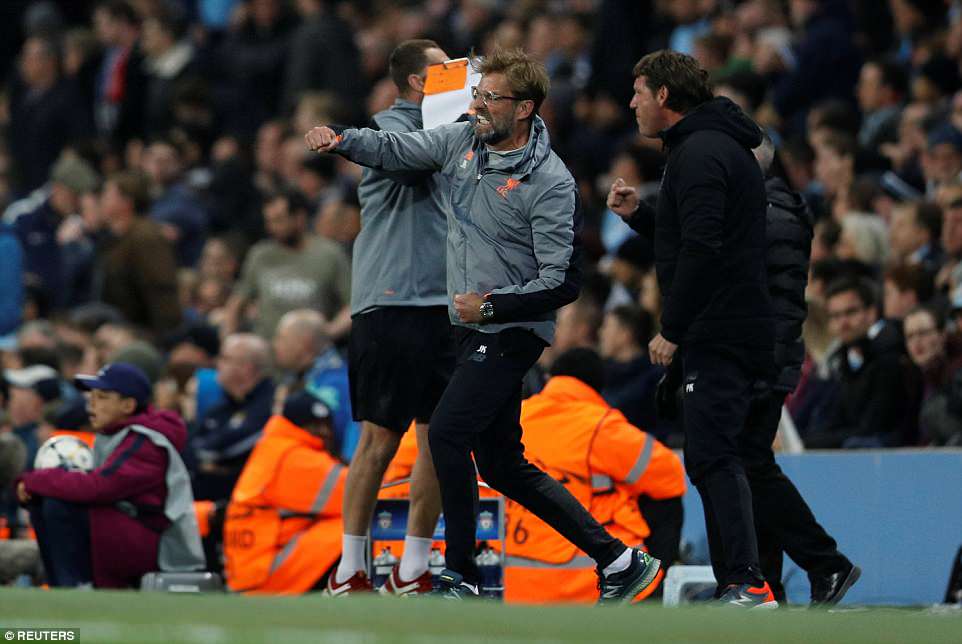 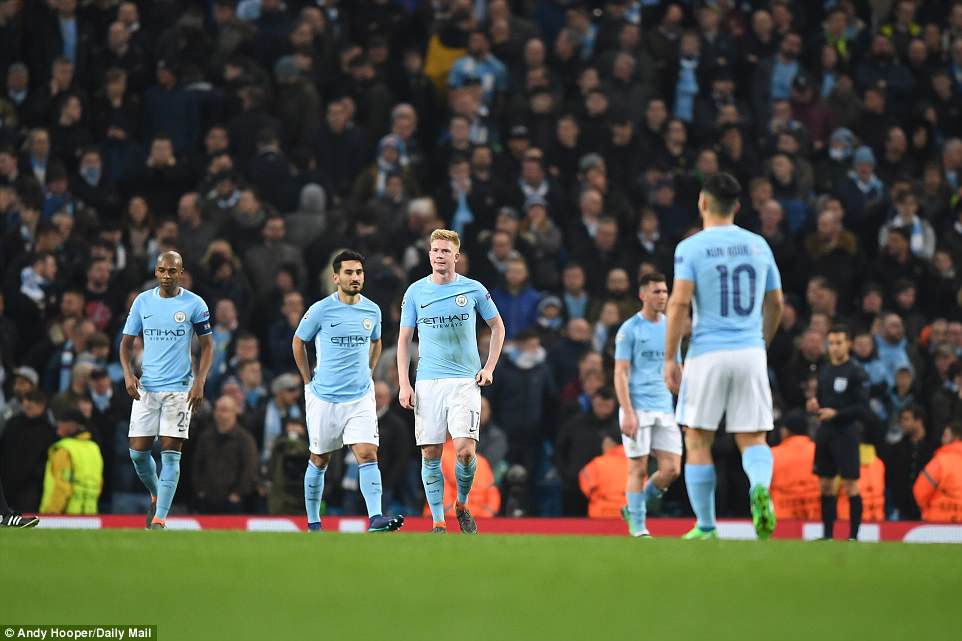 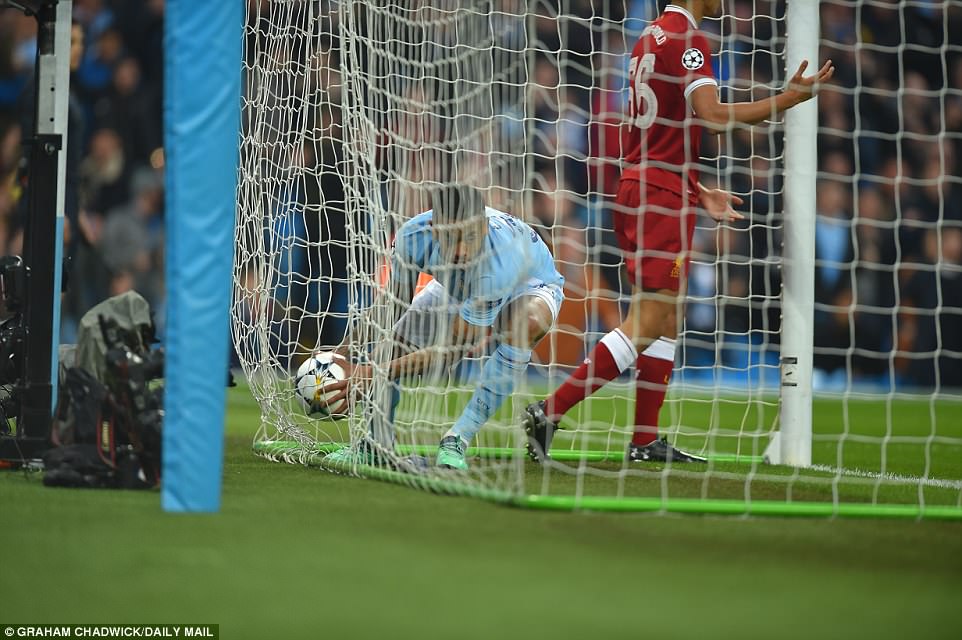 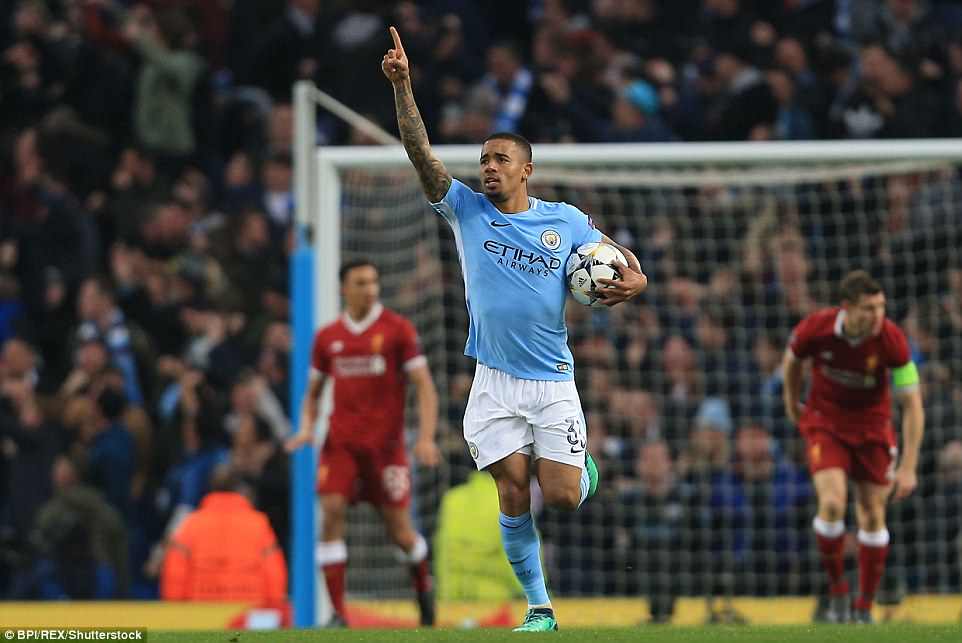 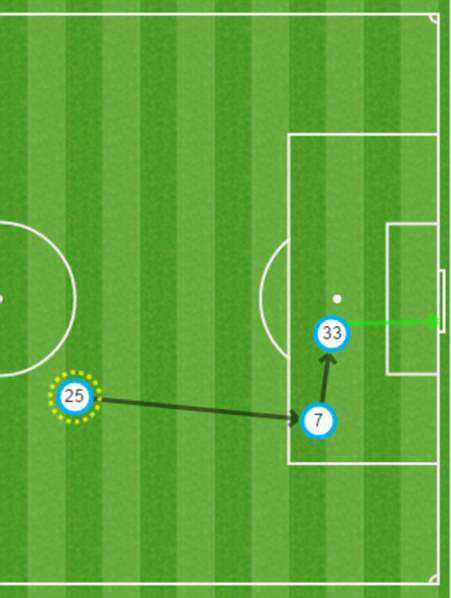 Gabriel Jesus slots Manchester City ahead in just the second minute of the game. CLICK HERE for more from MATCH ZONE.

He didn’t even leave his yellow ribbon behind as a reminder of his presence. When the camera panned in on him in the plush blue seats, he looked forlorn, helpless, like Superman in the presence of Kryptonite. When Liverpool scored the second, to win, he put his head in his hands.

Credit, though, to Liverpool who win this tie 5-1 on aggregate, a hugely impressive display, even if they were pinned back for 45 minutes here. Once Jurgen Klopp got them back in at half-time, however, they came out a different side: more ambitious, gambling where they had previously been unfamiliarly conservative.

They ripped the heart from City with the first goal, making the second almost inevitable. They have been quite brilliant across these two legs – and clinical in a way City were not.

Georginio Wijnaldum started the move that led to the goal, finding Mohamed Salah who freed Sadio Mane, staying upright when it would have been tempting to fall in the area under pressure from his City pursuers.

Ederson, in the City goal, looked to have mopped up, but then spilled the ball, allowing Salah a trademark finish. Close range, no panic, lifting it into the net, coolness personified.

It was already over, but Liverpool went for a second stake through the heart just to make sure. Nicolas Otamendi dawdled, Roberto Firmino – arguably Liverpool’s man of the match – caught him and finished smartly past Ederson. The home fans began trudging in a trickle towards the exit. It has been a great season. Not, as their coach will surely concede, a seven days. 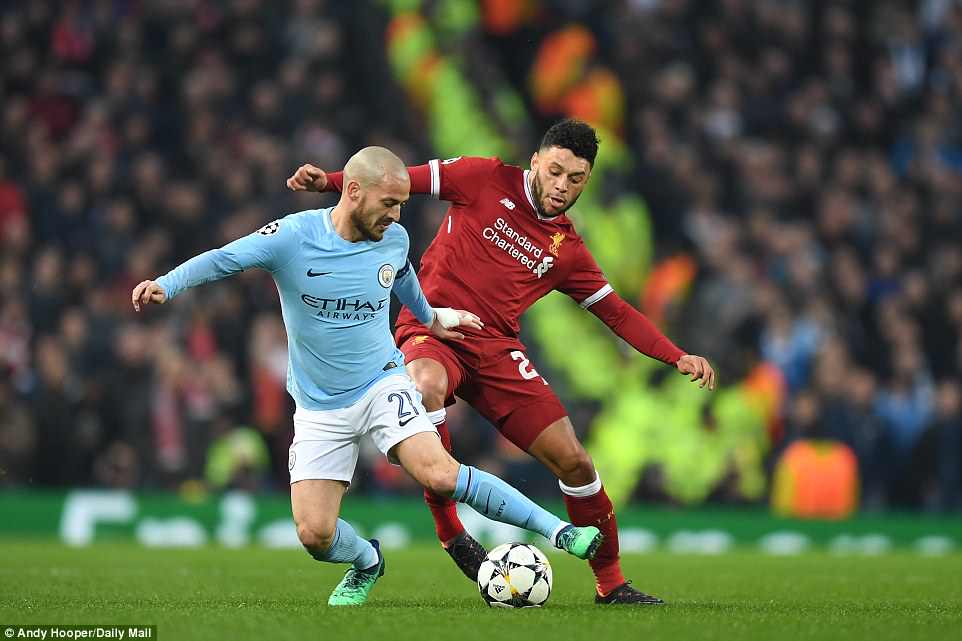 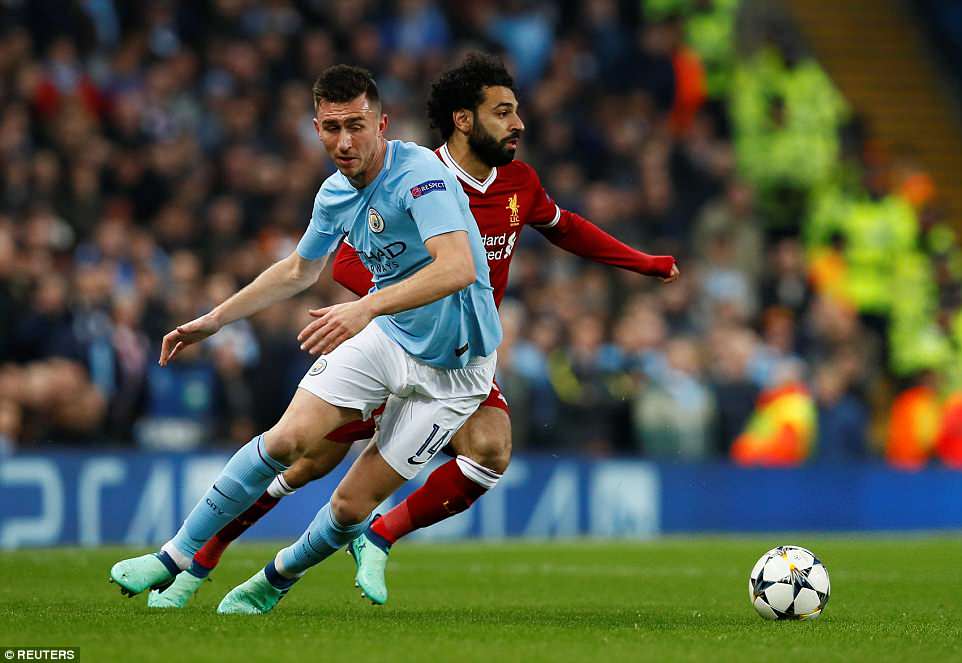 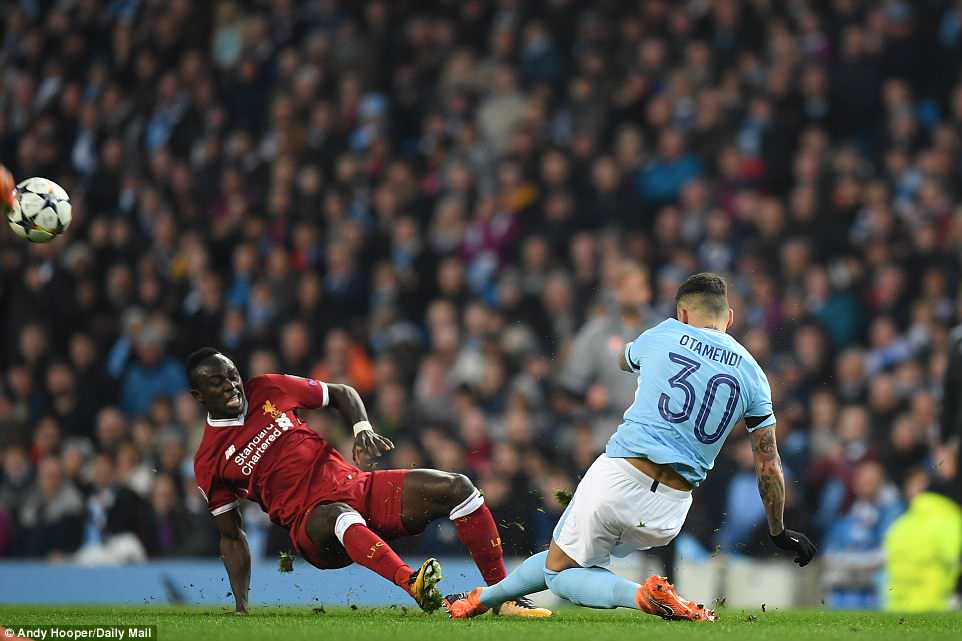 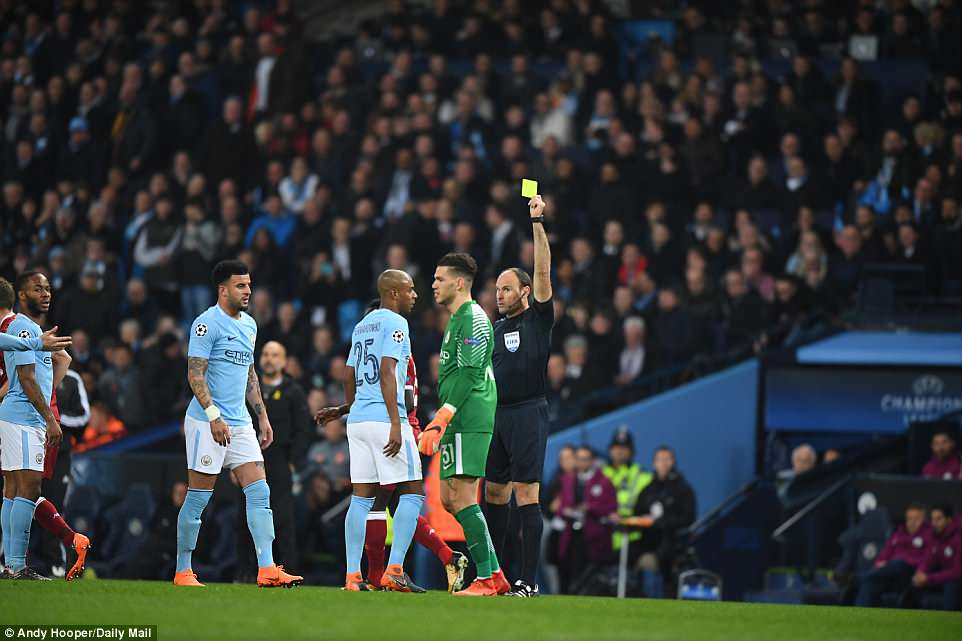 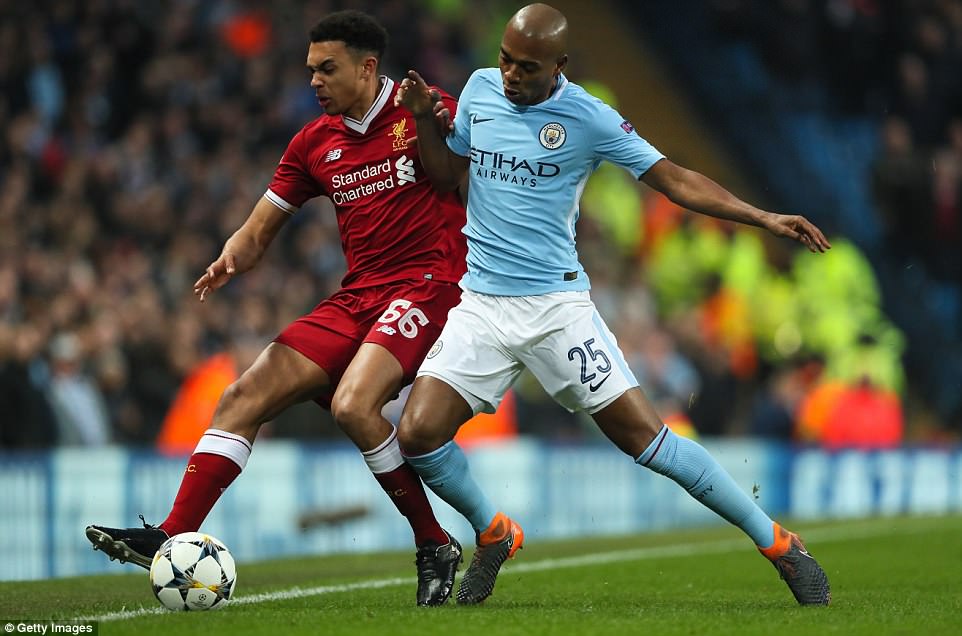 As magnificent as Liverpool had been in the first-half last week, so Manchester City were across the opening 45 minutes here. The difference is that, while Liverpool got the goals and the advantage across the tie they needs, City went in frustrated.

So much so that Pep Guardiola confronted an old adversary, referee Antonio Mateu Lahoz, from Spain, and was sent to the stands. Mateu Lahoz had hardly covered himself in glory in the first-half. He had waved away two penalty shouts that could have gone City’s way, gave offside against a City ball that appeared to be teed up by James Milner and seemed very relaxed about the time Liverpool goalkeeper Loris Karius was taking to bring the ball back into play.

That said, Liverpool claimed Virgil Van Dijk was fouled for City’s first goal, and Sadio Mane had been booked for a tackle on Nicolas Otamendi that looked horrendous in real time but, on closer inspection, turned out to be a case of the striker slipping on the wet surface and skidding into his opponent. It was sheer bad luck, not ill intent.

So Mateu Lahoz was an equal opportunities offender. He didn’t do anyone any favours and Guardiola had a responsibility not to jeopardise his best laid plans. Watching the second-half from the stand should not have been part of that.

For it was going very well, to that point. If Guardiola had sent his team out with a message it was to be relentless and Liverpool could not get off this ride. The passing carousel, Sir Alex Ferguson would call it when his teams farced Barcelona, but his was more the wall of death.

It spun, but faster. City met Liverpool’s fire with one of their own, fast, furious, the ball recycled in an instant, either by the ball boys or goalkeeper Ederson. It meant Liverpool were never allowed to gain composure, to step off, to stop moving. It did not help, either, that they conceded from the first attack of the game.

There were one minute and 57 seconds expired when Manchester City scored, the best start imaginable. Van Dijk has been credited with stabilising Liverpool at the back, but he flapped here, losing out in a challenge to Raheem Sterling and debating the decision rather than moving on with the game. 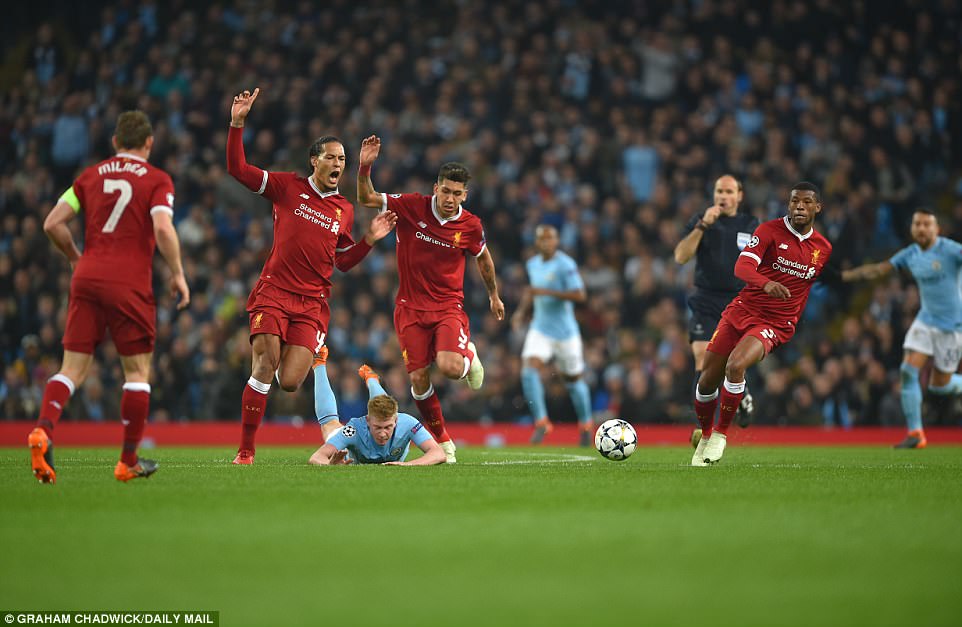 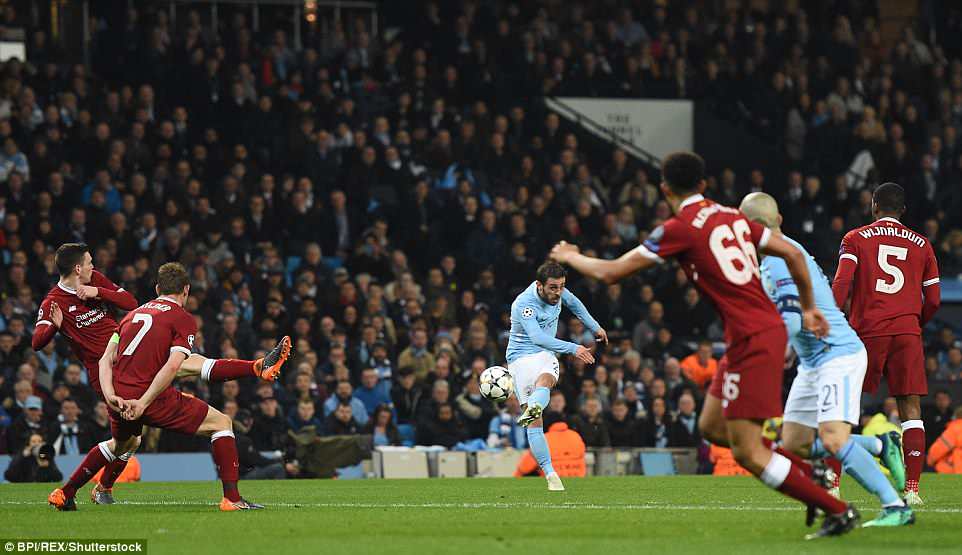 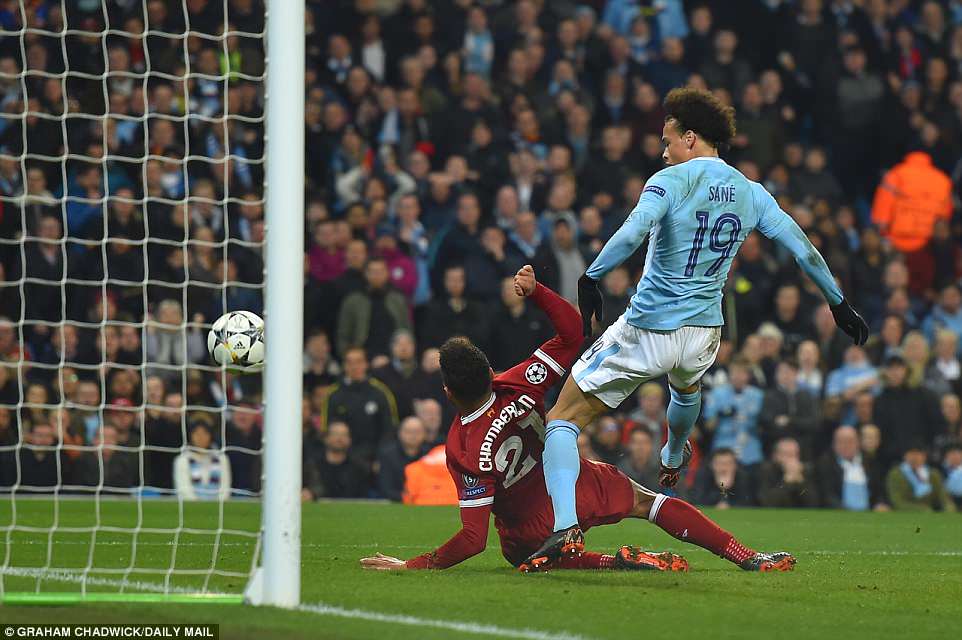 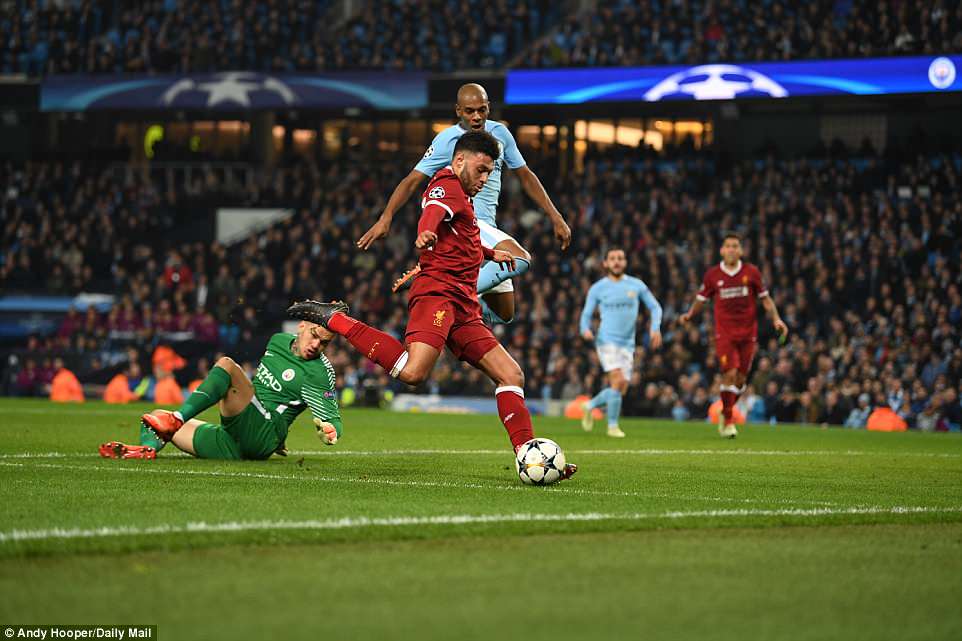 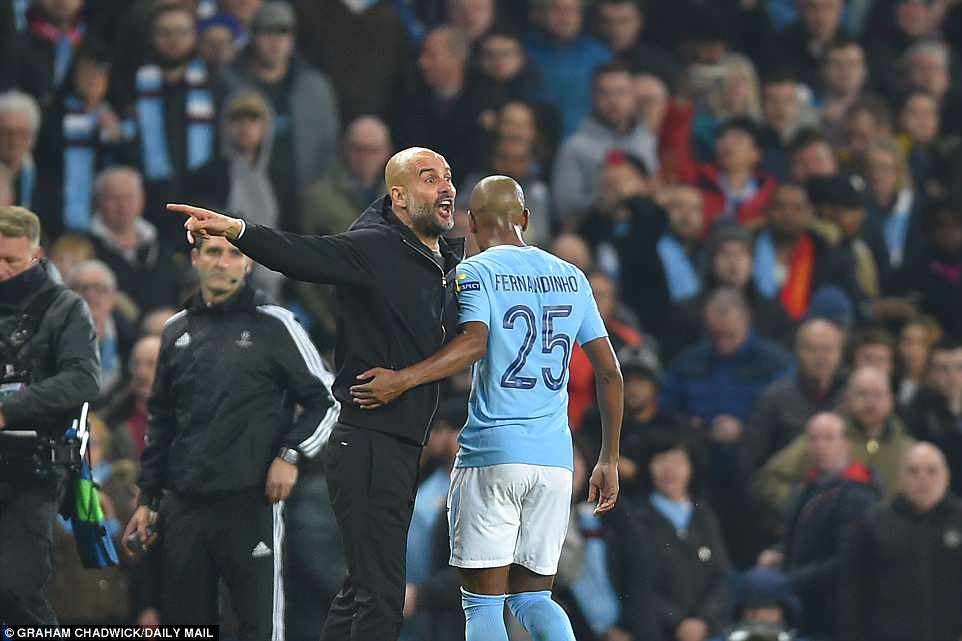 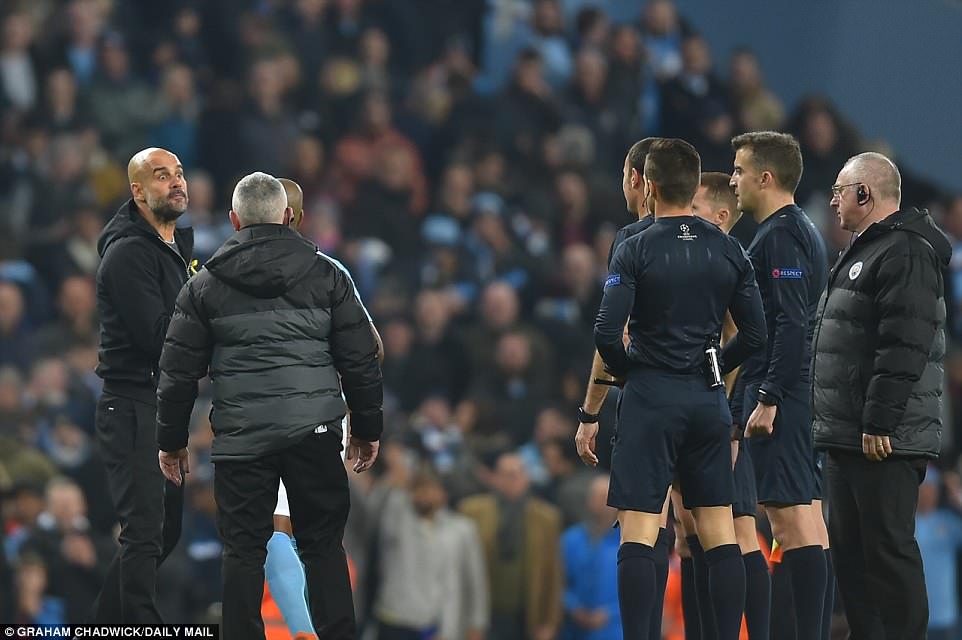 The ball was played back in to Sterling who broke through the gap vacated by van Dijk and squared to Gabriel Jesus. So ineffectual in his last two games, the first leg and the derby on Saturday, his finish was mustard here. Clinical, first time, and past Karius at his near post.

From there, City were away. They had the lion’s share of the ball and with more control in and around Liverpool’s area could have levelled the aggregate score by half-time. In the 20th minute, Leroy Sane cut in on the left – Trent Alexander-Arnold could not muster the same level of control he enjoyed at Anfield – and forced a save from Karius, who chose to punch, not palm, the ball clear.

Then, those controversial calls. Bernardo Silva had a shot on 30 minutes blocked by James Milner, who looked to have moved his body, including his arms, towards the ball. Mateu Lahoz was unmoved. To add insult, he then showed Silva a yellow card for protesting.

Next up, a challenge by Andrew Robertson on Sterling that certainly looked like manhandling, even if the City man tumbled quite easily. Was it a penalty? It’s a close call. Seen them given? Most definitely.

Finally, the goal, turned in by Sane after Karius had come for the ball and failed to collect. The scorer was flagged offside, which he would have been, had the ball not been diverted into his path by a Liverpool player, Milner. It was this, in particular, that Guardiola seemed incensed about. Perhaps with good reason. Chasing three is hard enough as it is, without legitimate goals being chalked off.

Shortly before half-time, two further efforts from Bernardo Silva – the first just wide, the second clipping the top of Dejan Lovren’s head and diverting onto the far post.

Then, a portent. The last attack of the first-half came from Liverpool – their first serious one and a warning of the fragility of City’s position. Roberto Firmino found Salah, who lost possession, only for Alex Oxlade-Chamberlain to regain it, play a one-two with Salah, and fire a shot just wide. It was a sign of City’s vulnerability. The events early in the second-half merely confirmed that. 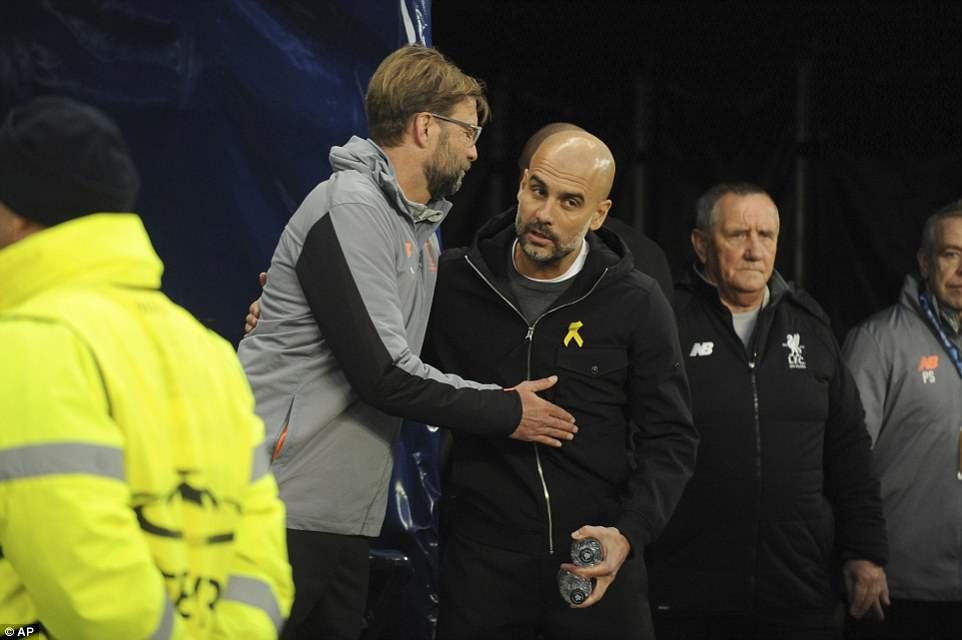 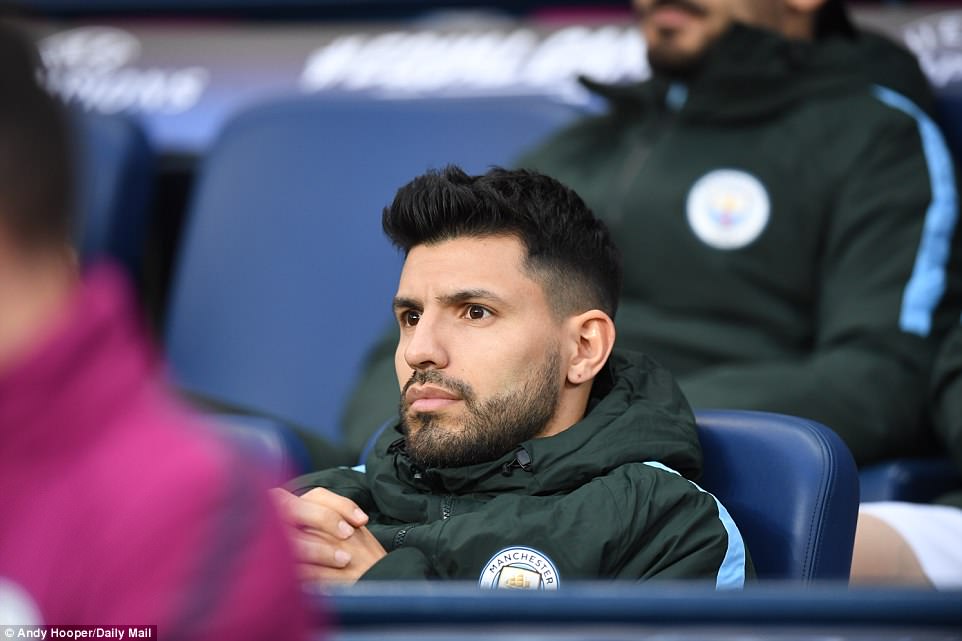 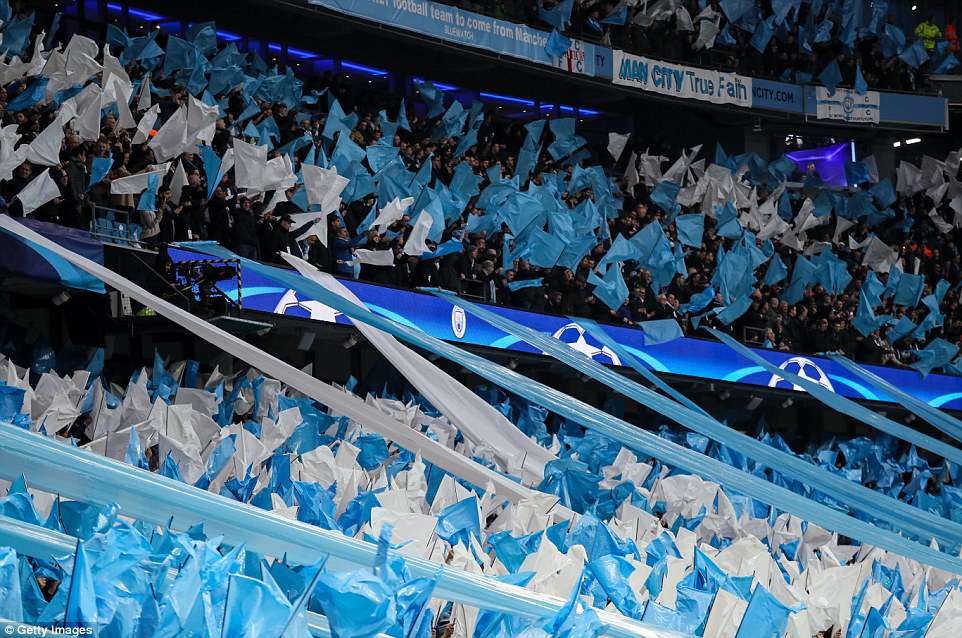