Manchester City will need to overturn a three-goal deficit on Tuesday night if they are to stun Liverpool and advance to the Champions League semi-finals.

Pep Guardiola’s team were blown away by Jurgen Klopp’s side in last week’s first leg, conceding three goals in a devastating 19-minute spell in the first-half at Anfield.

The good news for City is that there is historical precedent for achieving such a comeback in the Champions League. However, it hasn’t happened too often. 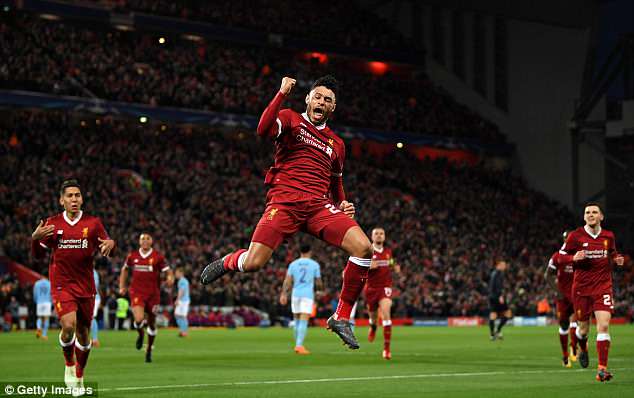 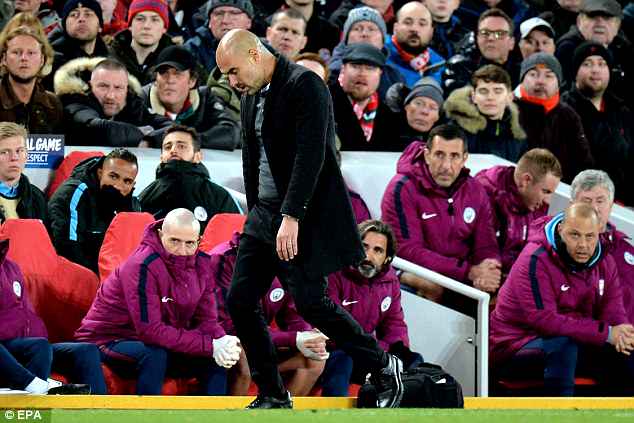 Just once has a team overturned a four-goal deficit – Barcelona’s famous win over Paris Saint-Germain last season – while only one other team has managed to come back from a three-goal loss.

There have been nine instances of a team fighting back from a two-goal first leg deficit to progress, but City will have to do better than that at the Etihad Stadium.

We take a look back at all of these Champions League comebacks and how they unfolded.

In arguably football’s most dramatic comeback ever, Barcelona trailed Paris Saint-Germain 5-3 on aggregate with just two minutes of the second leg remaining.

They had been comprehensively outplayed to lose 4-0 in the first leg at the Parc des Princes and though they pulled three goals back at the Nou Camp, Edinson Cavani’s response looked to have sealed PSG’s passage. 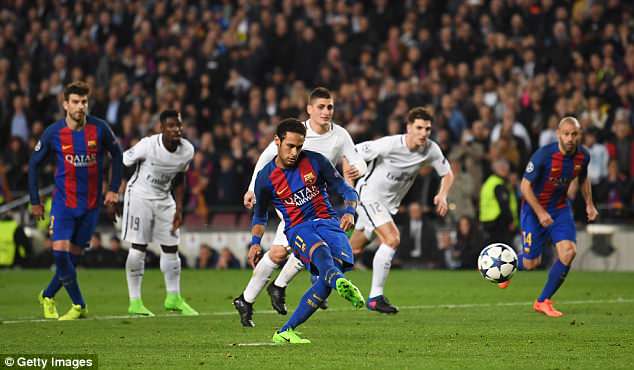 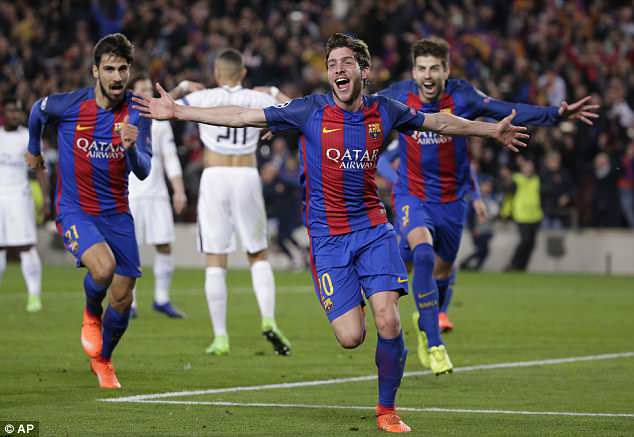 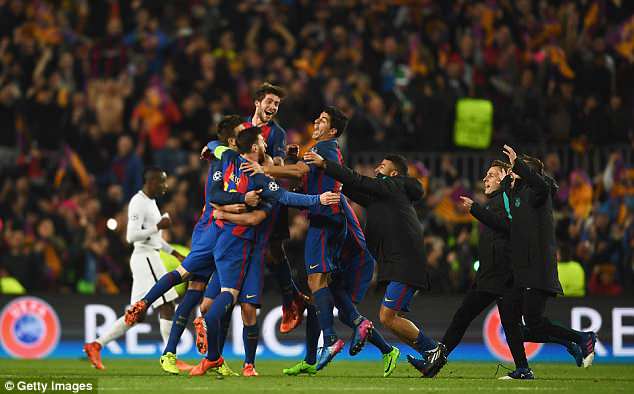 The clock read 88 minutes when Neymar curled home a free-kick, but Barcelona still needed to score twice more because of the away goal.

Even when Luis Suarez won a penalty early in stoppage time, converted by Neymar, PSG were still heading into the last eight.

But, in the fifth minute of injury time, the outstanding Neymar supplied the cross from which substitute Sergi Roberto poked home an improbable Barcelona winner, sparking wild celebrations and leaving PSG stunned.

It remains the only time a side has reversed a four-goal deficit in the history of the Champions League.

In a season of Champions League shocks that culminated in Jose Mourinho’s Porto lifting the trophy, Milan threw away a three-goal advantage to tumble out to Spanish side Deportivo La Coruna.

The tie was considered done and dusted when reigning champions Milan won 4-1 in the San Siro, but dogged Deportivo had other ideas. 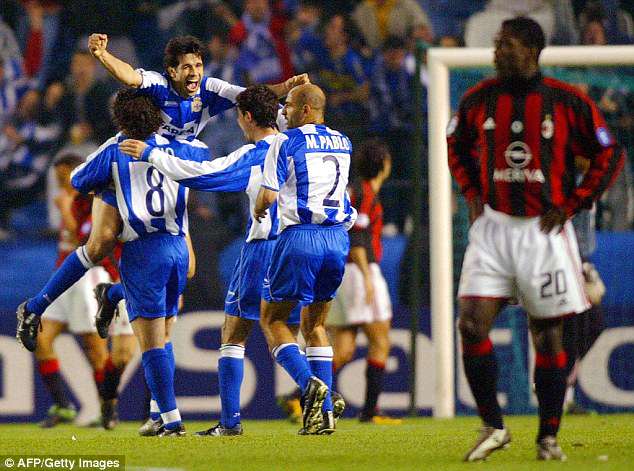 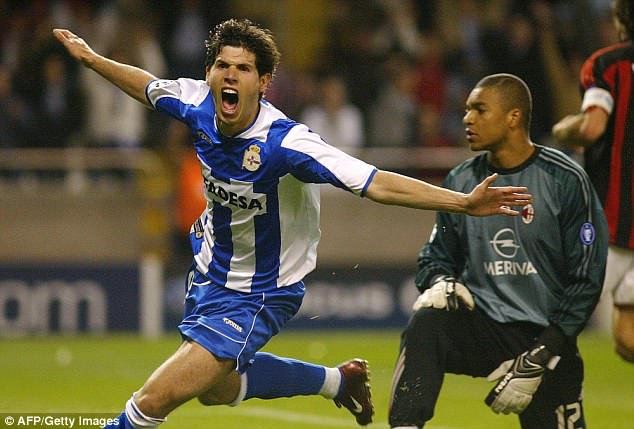 Milan’s usually watertight defence was rocked and Albert Luque had the La Liga side ahead on away goals shortly before half-time.

Gonzalez Fran came off the bench to seal Deportivo’s unlikely progress into the semi-finals, where they were beaten by Porto.

Chelsea were on track for a landmark Champions League victory when a goal from Gianfranco Zola and two from Tore Andre Flo in an eight-minute spell helped them beat Barcelona 3-1 at Stamford Bridge.

But their dreams were shattered at the Nou Camp after they led 4-3 on aggregate with just seven minutes of regulation time remaining, in what proved a harsh European lesson. 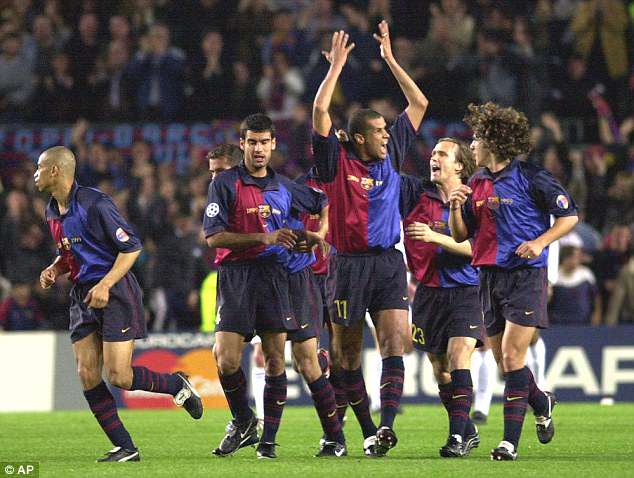 Rivaldo and Luis Figo had levelled the aggregate scores in the first-half, but Flo scored on the hour mark to edge Chelsea once again in the direction of the semi-finals.

But Dani snatches the all-important goal to force extra time, where a Rivaldo penalty and a fifth from Patrick Kluivert killed off the Chelsea challenge.

Another classic tie from a Champions League campaign full of them as Monaco launched a stunning second-half comeback to dump Real Madrid out at the quarter-final stage.

Real had won the first leg 4-2 at the Bernabeu, but those two goals, scored by Sebastien Squillaci and Fernando Morientes, the striker on loan from Real at the time, would prove vital. 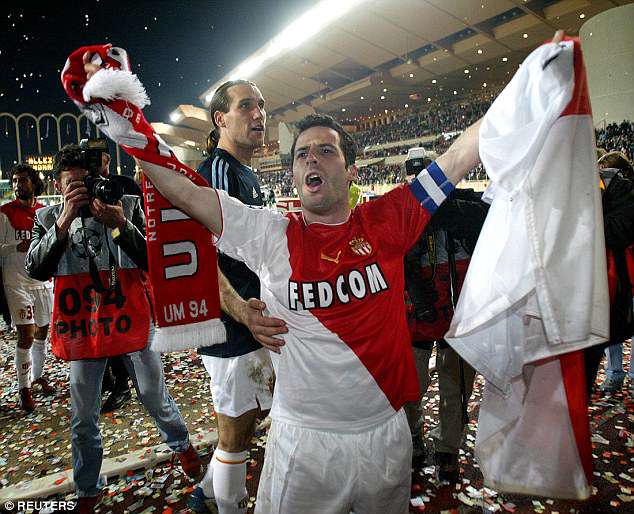 However, when Raul further extended Real’s aggregate lead to 5-2 after 36 minutes of the return leg, Monaco seemed to be dead and buried.

Not a bit of it. Ludovic Giuly pulled one back on the stroke of half-time, then Morientes further punished his parent club. A clever backheel by Giuly on 66 minutes was enough to take Monaco through on away goals.

Chelsea’s 3-1 defeat in Naples in the first leg saw manager Andre Villas-Boas removed from his post after less than 10 months in charge and plunged the club into turmoil.

In between the two legs, Roberto Di Matteo assumed caretaker charge and the Italian oversaw a memorable comeback that would provide the impetus Chelsea needed to go on and lift the trophy. 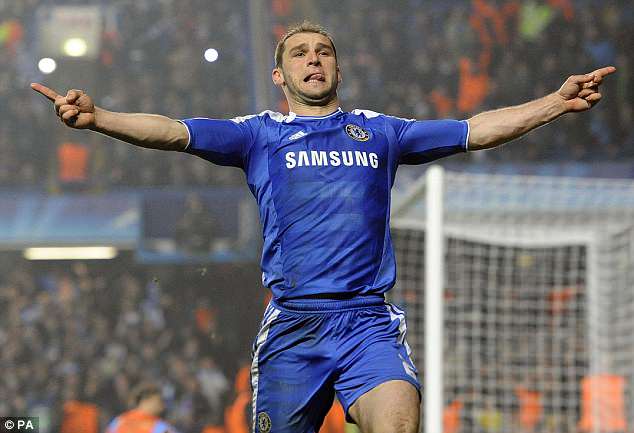 On a thrilling night at Stamford Bridge, goals from Didier Drogba and John Terry wiped out the arrears, only for Gokhan Inler to reply and put Napoli in the box seat once again.

Frank Lampard sent the tie into extra time with a penalty 15 minutes from time and a thumping finish from Branislav Ivanovic saw Chelsea through.

Barcelona were a pale shadow of their usual brilliance as they lost 2-0 in the San Siro thanks to goals from Kevin-Prince Boateng and Sulley Muntari.

However, everyone assembled at the Nou Camp for the second leg knew the tie was far from lost. It took Lionel Messi just five minutes to halve the deficit and the Argentine magician scored again just before the break. 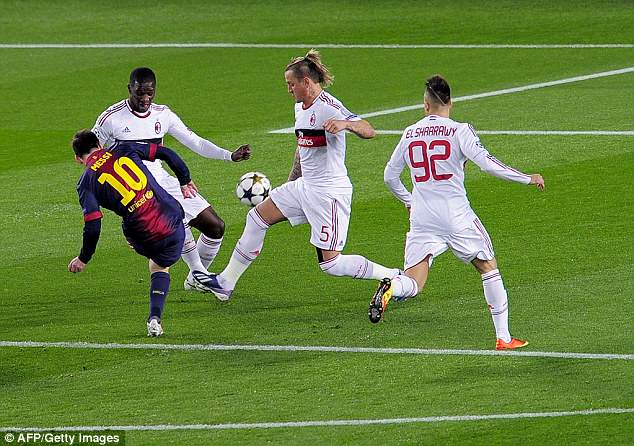 Milan had their chances but they ultimately crumbled under the pressure, with David Villa putting Barcelona in front for the first time in the tie and Jordi Alba wrapping things up late on.

Barcelona went on to lose to Bayern Munich, the eventual winners, in that season’s semi-final.

United’s shock loss away in Greece to Olympiacos was the nadir of the David Moyes nine months in charge at Old Trafford and they had a mountain to climb at Old Trafford.

But after much introspection, especially given they had been beaten 3-0 at home by Liverpool days before, United roared back at Old Trafford as their prolific Dutch striker Robin van Persie scored a hat-trick. 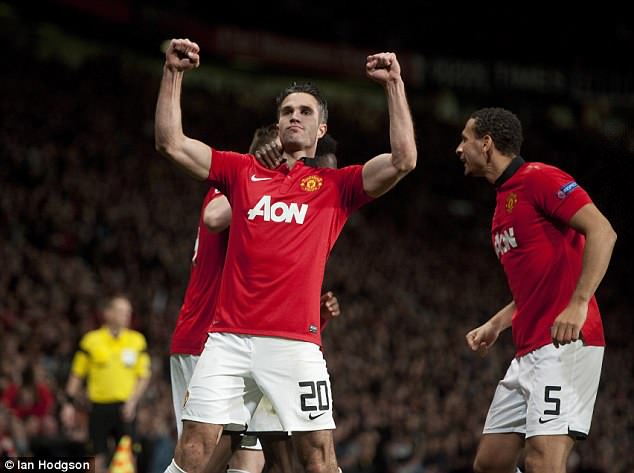 ‘Chosen One’ Moyes smiled as he applauded the Stretford End at the final whistle, but his ill-fated United tenure wouldn’t last too much longer.

Eden Hazard’s first-half penalty offered the Blues a glimmer of hope, however, and Andre Schurrle had Stamford Bridge well and truly believing with a first-half opener. 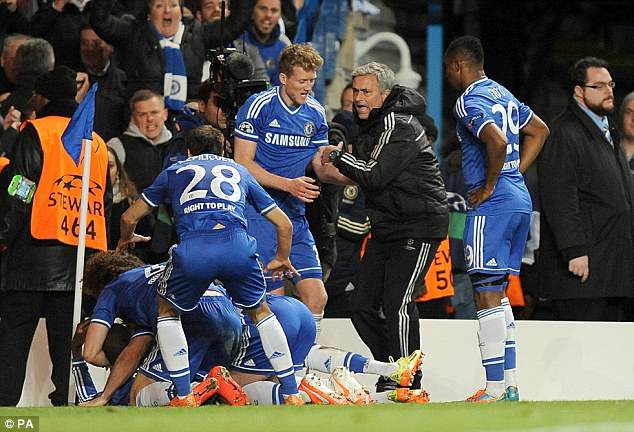 But they still needed a second to progress and it didn’t arrive until three minutes from time when substitute Demba Ba bundled the ball home from six yards.

Cue wild celebrations as Mourinho sprinted down the touchline to join in the celebrations, a moment reminiscent of the time his Porto side knocked Manchester United out in 2004.

Bayern Munich, the 2013 champions and semi-final regulars, were left shell-shocked after defensive frailties were exposed in a 3-1 first leg defeat to Porto.

But it is always foolish to write Bayern off and so it proved as a devastating first-half at the Allianz Arena put Porto well and truly in their place. 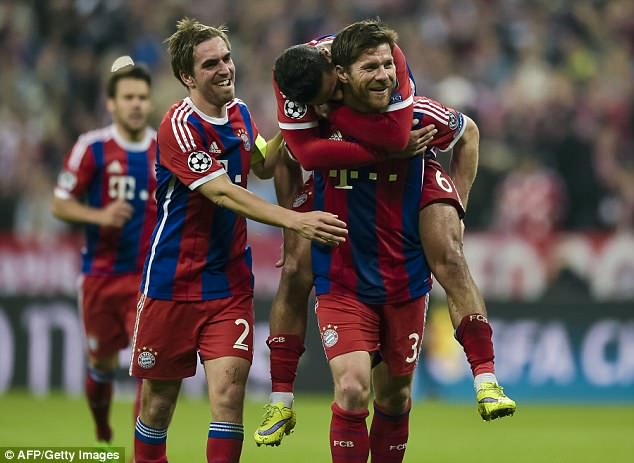 Thiago and Jerome Boateng headers ensured aggregate parity inside 22 minutes, Robert Lewandowski put them ahead and Thomas Muller made it 4-0. Lewandowski then scored a fifth before the break.

Jackson Martinez offered brief hope of a fightback but Porto were left well and truly beaten when Xabi Alonso scored the sixth from a free-kick.

Wolfsburg recorded one of the finest results of their history when goals from Ricardo Rodriguez and Max Arnold punished an out-of-sorts Real Madrid in the first leg.

That was the first time Real had lost in the quarter-finals since 2004 and they were determined to make amends in the return leg at the Bernabeu. 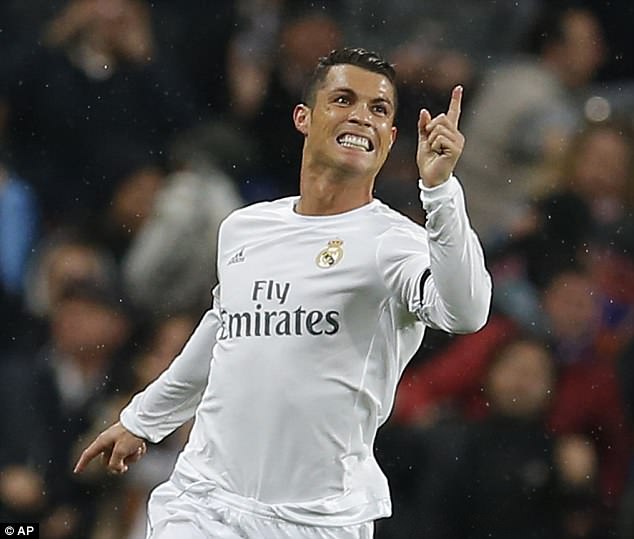 With Cristiano Ronaldo in your ranks redemption is never too far away and the Portuguese scored twice in the space of 86 seconds early on to wipe out the German’s advantage.

A late free-kick through a parting Wolfsburg wall completed his Treble and kept Real on course for another Champions League triumph.

A classic Champions League contest that remains fresh in the memory as a young and vibrant Monaco team got the better of Pep Guardiola’s Manchester City over two thrilling legs.

The first leg at the Etihad was a humdinger, with Monaco leading 2-1 and 3-2 before late goals from Sergio Aguero, John Stones and Leroy Sane gave City a useful two-goal advantage. 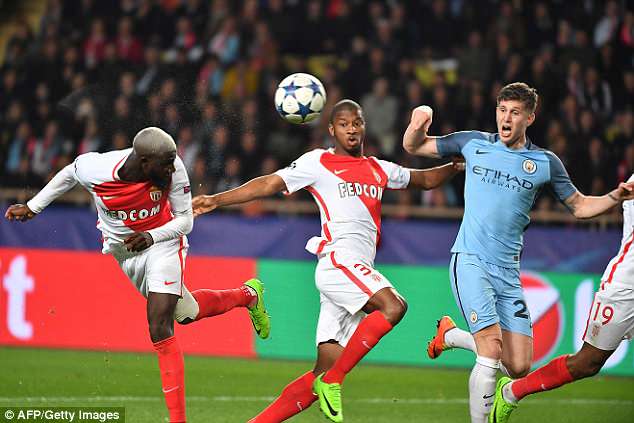 But that didn’t last too long at the Stade Louis II as goals from Kylian Mbappe and Fabinho exposed City’s defensive weaknesses.

But when Sane scored after 71 minutes, City were still on their way through. With 13 minutes left, Tiemoue Bakayoko capitalised on slack marking to head home the decisive goal.