Funnily enough, this was actually the plan: Fernandinho was always to become a central defender. Just not this quickly and certainly not with this unsettling haste.

Even the richest can find themselves vulnerable and that is definitely where Manchester City are right now, sitting uncomfortably in relying on a 34-year-old midfielder to bail them out at the back. ‘I like it,’ Pep Guardiola said with a straight face here in Kharkiv. ‘I am ready for the challenge.’

A challenge he would rather do without, one he will have been contemplating while slouched in his dugout 45 minutes before kick-off with the glare of photographers and their flashing bulbs.

City do not – and cannot – know how these next few weeks will pan out sans John Stones. Aymeric Laporte, by far their best defender, is missing until February.

So it is Fernandinho’s time alongside the maligned Nicolas Otamendi. One of Guardiola’s first declarations as manager in 2016 was to claim the Brazilian can play 10 positions and we are about to find out how suitable he is to this particular slot.

Captain against Shakhtar Donetsk on Wednesday night, his unflappable air gave City comfort. The only real blemish was playing Junior Moraes onside whilst miscommunicating with Ederson. 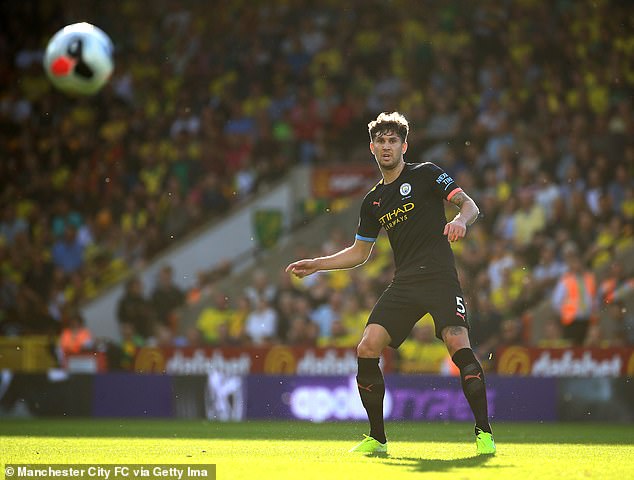 Shakhtar were not overly adventurous and sterner tests await in the Premier League but this was generally solid enough. If anything, Otamendi had more trouble marking Moraes and appeared hurried. Moraes should have done better when he breached City’s defences with this still at 1-0.

Fernandinho, who was a little sluggish on the cover when Moraes broke clear, often acted as the spare man. That utilised his distribution perfectly, pinging expansive balls from left to right for Riyad Mahrez.

Amid the hullabaloo of a defensive crisis, Fernandinho’s ability on the ball, and how he can launch attacks from the back as part of Guardiola’s fabled ‘build-up’, has been overlooked somewhat. 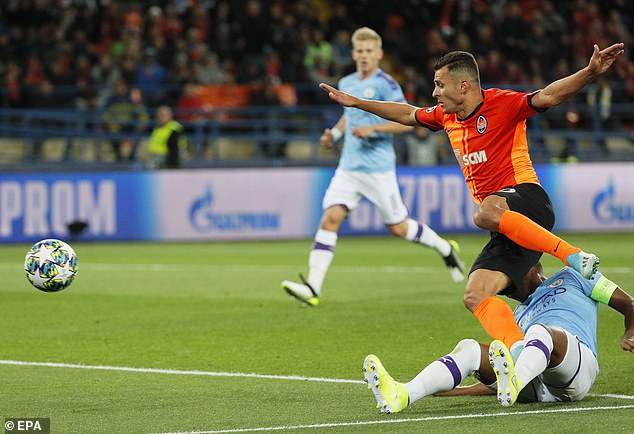 Still, the City bench squirmed whenever their back four were placed under pressure and a sense of anxiety lingered.

Premier League opposition will look at the occasional joy Shakhtar engineered in behind Otamendi with relish and there are undoubtedly going to be hairy moments. Kyle Walker is also trying to play his way out of a sticky run of form, with £60million Joao Cancelo watching on.

Others may target Fernandinho aerially and he has undergone lengthy heading drills with fitness coach Lorenzo Buenaventura to improve his jump. He is learning on the job. Training sessions have been spent at centre half ever since he returned from the Copa America last month, but that is no length of time whatsoever. 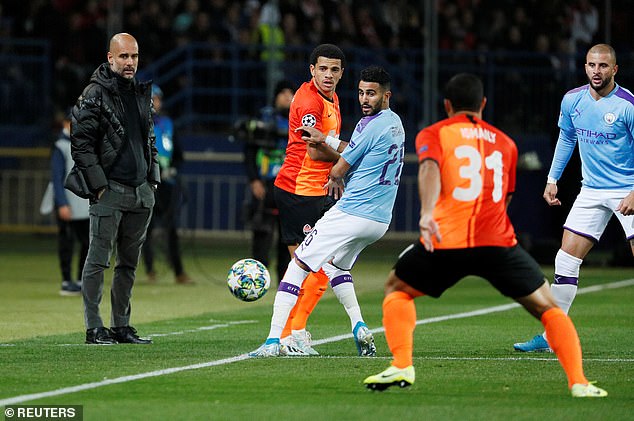 It is a position he has briefly played before, notably away at Schalke in this competition last season. City really struggled that night, requiring inspiration from Leroy Sane to snatch a last-gasp 3-2 victory.

When replacing Laporte against Brighton three weeks ago, it was noticeable that he dropped far deeper than his team-mates. Minor tune-ups were necessary and seem to have been heeded in the weeks since.

That is a positive sign and evidence of exactly why Guardiola believes Fernandinho can excel in unfamiliar surroundings. City just wish it had not been foisted upon them.