A Tennessee man who tweeted out an elaborate, viral tale about the time he stole a brick of heroin from MS-13 is now claiming that the story was a lie and has started a fundraiser to help him go into hiding because he fears for his life.

Shane Morris, a web developer from Nashville, Tennessee, took to Twitter Monday night with a 109-tweet thread recounting a road trip he took with a friend.

‘Y’all wanna hear a story about the time I accidentally transported a brick of heroin from Los Angeles to Seattle? I bet. Alright, let’s do this…’ Morris tweeted.

Web developer Shane Morris (right) went viral after writing a Twitter thread about a road trip during which he found a kilo of heroin in a van (pictured) and sold it, only to later learn the drugs belonged to MS-13 members 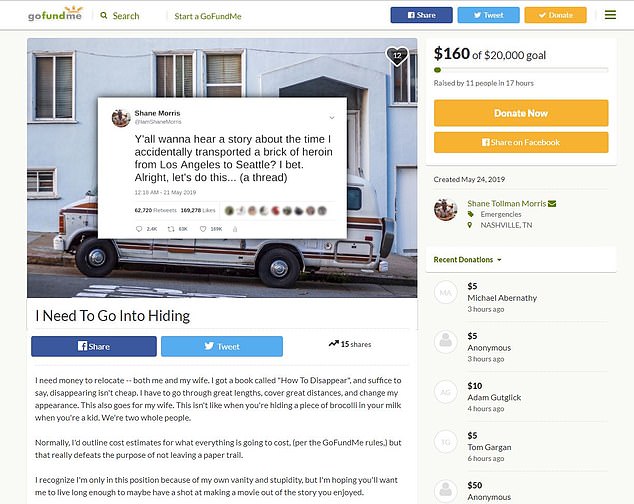 On Friday, Morris started a GoFundMe, requesting donations to help him ‘go into hiding’ because he feared for his life after getting threats about the story

What followed was a saga about how he and his friend bought a cheap van to use during their road trip, discovered a kilo of heroin inside it and sold the drugs to someone to get it out of his hands.

Some time later, the original owner of the van’s recently incarcerated son phones him up and asks if he can buy the van back, at which point Morris decides he’s going to milk the guy for about $10,000 while tricking him into thinking that the heroin is still in the van, using a cleverly-wrapped copy of John Grisham’s The Pelican Brief.

Morris ended the Twitter thread by noting that: ‘In 2017, the guy I ripped off for his brick of heroin was found guilty, with four other guys, of raping and murdering a 13 year old girl. They were all prominent MS-13 gang members. He got LWOP’d in his sentence. So it looks like he won’t be killing me.

‘… and that’s the story of the time I bought a van with a brick of heroin in it that belonged to an MS-13 gang member, sold the brick, and then sold him his van back with a wrapped up John Grisham novel, for $10,000. Somehow, I didn’t die.’

The tweets were supplemented with pictures from the road trip.

But, after three days of basking in the social media spotlight, Morris — a former music blogger — turned to online publishing platform Medium to recant the entire tale.

‘I Lied. I Made The Whole Thing Up. Now I’m In Huge Trouble,’ was the title of Morris’ post Thursday.

Morris wrote that he ‘made the whole thing up’ and ‘Most importantly, I definitely didn’t rob an MS-13 gang member. In retrospect, that’s probably the dumbest thing you can write and put on the internet.’

He went on to note, ‘Think about the story you just read for a moment: If I had actually sold a fake brick of heroin, that I claimed I stole from an MS-13 gang member, and they really had my name and cell phone number… I wouldn’t be alive right now.’

Morris admitted that he crafted the fake story to ‘showcase my writing abilities, and get attention’ and ultimately learned from the exercise that ‘The reality of this situation is that I should probably be writing screenplays, rather than coding software.’

‘I’m just an opportunistic a***hole with a brilliant imagination,’ he wrote. 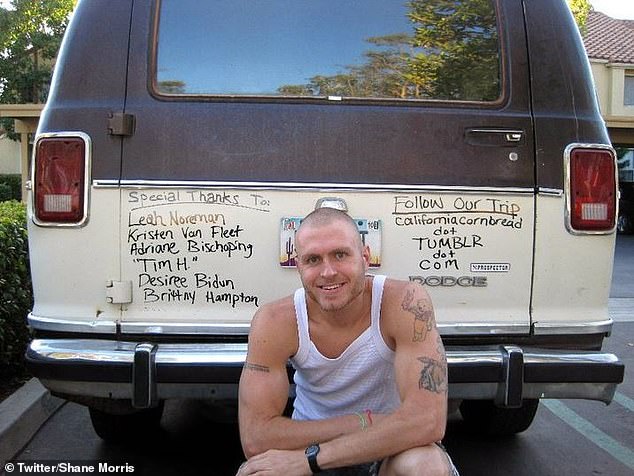 After basking in social media fame for three days, Morris posted on Medium admitting that the whole story was a pack of lies, he hadn’t actually found any drugs 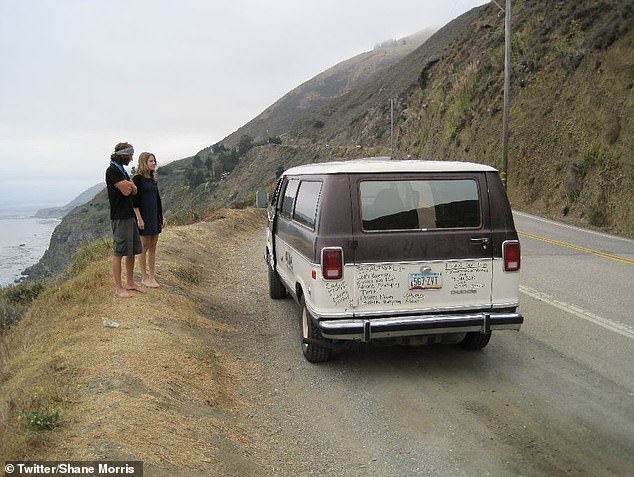 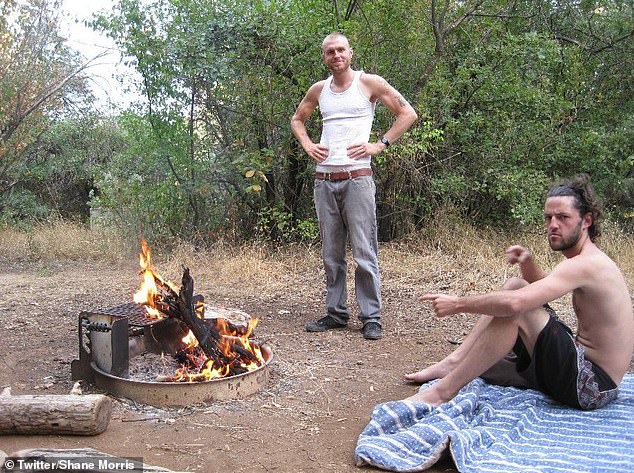 Morris (in white) said that he made up the tweets to ‘showcase my writing abilities, and get attention’ and call himself an ‘opportunistic a***hole with a brilliant imagination’ 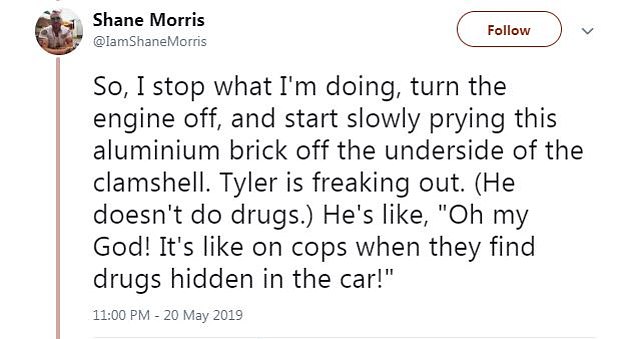 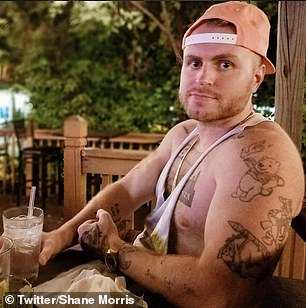 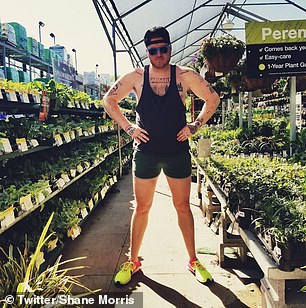 On Friday, Morris said that he had been getting death threats and that he needed to go into hiding along with his wife 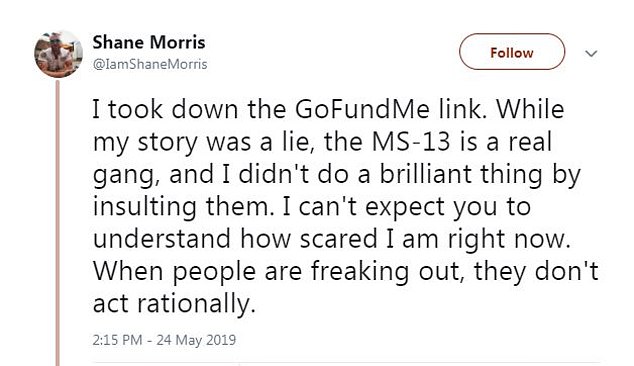 Morris also wrote that that the fun and games of going viral — predictably leading to Hollywood agents and filmmakers knocking on his door to get a piece of the hot action — went pear-shaped earlier that day when his ‘weed man’ stopped by his home and informed him that he’d made a big mistake.

‘”Did you actually just casually throw out how you robbed MS-13?”‘ the dealer supposedly said to Morris. ”I used to bang. I know these n****as. These n****as ain’t just gonna murder you. They’re gonna make that shit last for six fucking hours.’

Morris, in the post, then claimed to ‘have been crying on the bed of my friend’s guest bedroom, petting my dog, trying to decide which treehouse in Germany looks the most attractive as a long-term home.’

The apparent crying jag appears to have been brought on by the fact that he had told an enormous lie about stealing heroin to 120million people, all while name-checking ‘the most prolific street gang in America.’

The day after recanting his story, Morris started a GoFundMe for himself, seeking $20,000. He titled it, ‘I Need To Go Into Hiding.’

‘I need money to relocate — both me and my wife,’ wrote in the fundraiser which he posted on Friday.

‘I got a book called “How To Disappear”, and suffice to say, disappearing isn’t cheap. I have to go through great lengths, cover great distances, and change my appearance. This also goes for my wife. This isn’t like when you’re hiding a piece of brocolli in your milk when you’re a kid. We’re two whole people,’ Morris wrote.

‘Normally, I’d outline cost estimates for what everything is going to cost, (per the GoFundMe rules,) but that really defeats the purpose of not leaving a paper trail.I recognize I’m only in this position because of my own vanity and stupidity, but I’m hoping you’ll want me to live long enough to maybe have a shot at making a movie out of the story you enjoyed.’

Early Friday morning, Morris returned to Twitter with a couple of oddly joke-laden tweets regarding his GoFundMe.

‘Good news for all you snarky people: If the GoFundMe fails, I get murdered, and this whole things becomes a documentary, rather than a drama. In my own way, I’ll become Twitter Jesus — where I die, so others may have a contest to see who can leave the funniest comment,’ Morris tweeted.

He also tweeted: ‘If you’re trying to lose weight, I highly recommend the Gang Beef Diet. Start a beef with a notorious gang, and then wait for the death threats to roll in. You won’t eat, you’ll vomit like 6 times a day, and due to wrecked nerves, you’ll burn like 3,000 calories from shaking.’

Morris then turned serious, writing that he ‘took down the GoFundMe link. While my story was a lie, the MS-13 is a real gang, and I didn’t do a brilliant thing by insulting them. I can’t expect you to understand how scared I am right now. When people are freaking out, they don’t act rationally.’

Morris told The Daily Beast Friday that he ‘realized, because of my lie, that it’s not fun to fuck with MS-13’ and claimed that he had received threats against his life due to the viral tweets.

Although Morris didn’t give the website any proof revealing why he believes MS-13 members are out to get him over his tweets he maintained that he feared for his life.

He added that the viral ‘attention wasn’t worth it’ and said ‘There is no lie worth this kind of hell.’

The fundraiser gathered $160 throughout the day, before being shutdown by GoFundMe Friday evening.

Hours prior to taking Morris’ fundraiser down, a GoFundMe spokesperson told The Daily Beast that it had put a hold on the funds so it’s Trust & Safety team could ‘collect additional information’ from Morris.

‘If the campaign organizer is unable to verify the intended use of funds raised on the campaign during our review, the campaign will be removed and all donations will be refunded,’ the spokesperson said.