An author has confronted anti-abortion debaters by asking one powerful question, which he says destroys all their arguments.

Author Patrick Tomlinson took to Twitter earlier this month to make his point. The Milwaukee, Wisconsin writer, comedian and blogger explained there is one question he always wants to ask those who argue that the life of an unborn fetus is equal to that of a full-grown child.

‘Whenever abortion comes up, I have a question I’ve been asking for ten years now of the “Life begins at Conception” crowd. In ten years, no one has EVER answered it honestly,’ Tomlinson wrote.

Message: Author Patrick Tomlinson (pictured) has confronted anti-abortion debaters by asking one powerful question, which he says destroys all their arguments 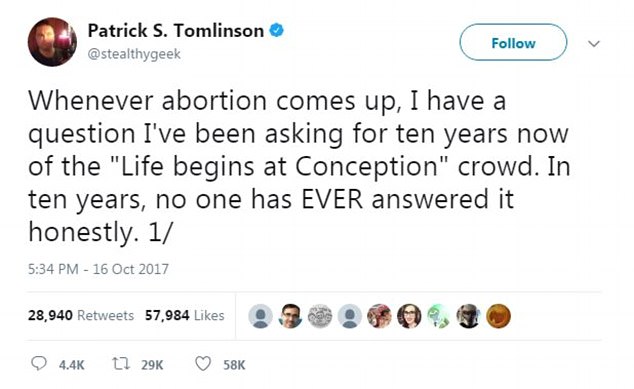 Conversation: The Milwaukee, Wisconsin writer explained there is one question he wants to ask those who argue that the life of an unborn fetus is equal to that of a full-grown child 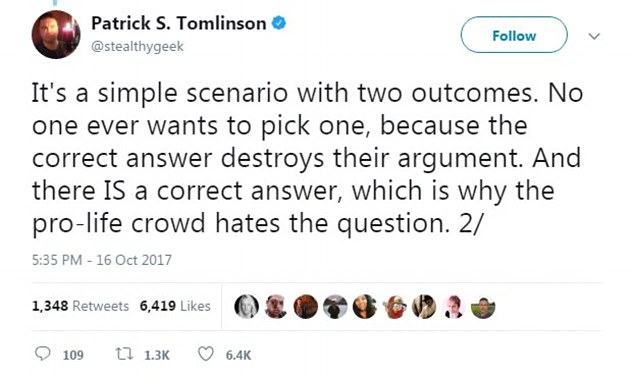 Choices: Tomlinson then explained that his question rests on a hypothetical scenario according to which one person can only pick one out of two possible outcomes

He then explained his thought experiment, which rests on a scenario that can only have two possible outcomes.

‘You’re in a fertility clinic. Why isn’t important. The fire alarm goes off. You run for the exit. As you run down this hallway, you hear a child screaming from behind a door. You throw open the door and find a five-year-old child crying for help,’ Tomlinson tweeted.

‘They’re in one corner of the room. In the other corner, you spot a frozen container labeled “1000 Viable Human Embryos.” The smoke is rising. You start to choke. You know you can grab one or the other, but not both before you succumb to smoke inhalation and die, saving no one.’

The author then asked his question to his 23,500 followers, asking people to choose who of the child or the 1,000 embryos they would rescue.

‘Do you A) save the child, or B) save the thousand embryos? There is no “C.” “C” means you all die,’ he added, making it clear that saving everyone isn’t an option.

Tomlinson then explained that he’s never gotten a straight answer while debating the scenario with anti-abortion crowds, and he doesn’t expect that to change in the future.

Reactions: The author’s argument, which he exposed in a series of tweets now pinned at the top of his profile, has received more than 58,000 likes and a string of replies 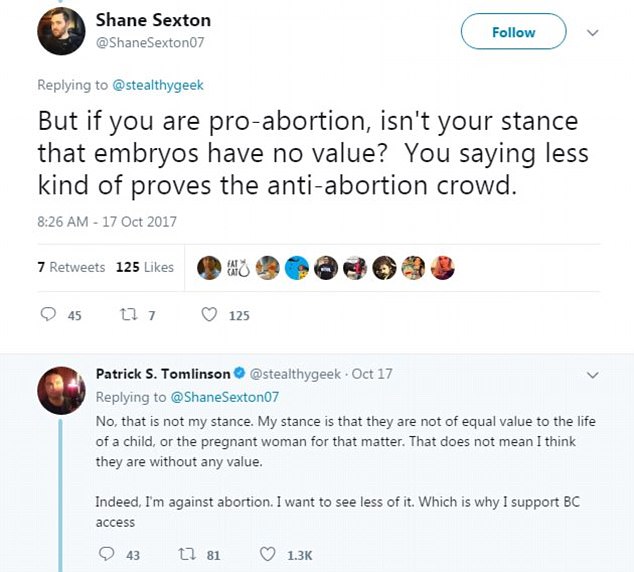 Debating: Someone said that Tomlinson’s thought experiment wasn’t objective because the author is ‘pro-abortion’, but Tomlinson replied that is not the case

Bending the rules: Some have criticized his thought experiment, saying they would rather save the child and the frozen embryos

‘They will never answer honestly, because we all instinctively understand the right answer is “A.” A human child is worth more than a thousand embryos. Or ten thousand. Or a million. Because they are not the same, not morally, not ethically, not biologically,’ he added.

‘This question absolutely evicerates their arguments, and their refusal to answer confirms that they know it to be true. No one, anywhere, actually believes an embryo is equivalent to a child. That person does not exist. They are lying to you.’

The author’s argument, which he exposed in a series of tweets now pinned at the top of his profile, has received more than 58,000 likes.

Tomlinon’s questions has led to some heated arguments between those who support abortion and those who don’t. Some have criticized his thought experiment, saying they would rather save the child and the frozen embryos, such as one man writing: ‘Hypothetically I would save the child. But I would strive to save everything. Why is that so wrong???’

The author later added a precision, clarifying his position by tweeting: ‘Because a lot of people are missing the point, it is not being argued the embryos are not alive. Nor is it being argued they are without value. All that is being demonstrated is their value is not equal to that of a human child. That’s it. That’s the point.’