By Kelsey Wilkie and Brianne Tolj For Daily Mail Australia

A man has died after he was found face down at Bondi Beach.

The man, aged in his 40s, was discovered unconscious in the surf at the iconic beach.

Emergency crews and a rescue helicopter rushed to the southern end of the beach around 11.45am.

The man had been rock fishing before he ended up in the water, a police spokesman said.

He had not been wearing a life-jacket at the time.

A spokesman for the NSW Ambulance said the man had gone into cardiac arrest, he was pulled from the water and CPR was performed at the scene.

‘Lifeguards were on the scene immediately and made contact with the patient there straight away.

The man was taken to St Vincents Hospital in a serious condition but died short time later, a hospital spokesman said. 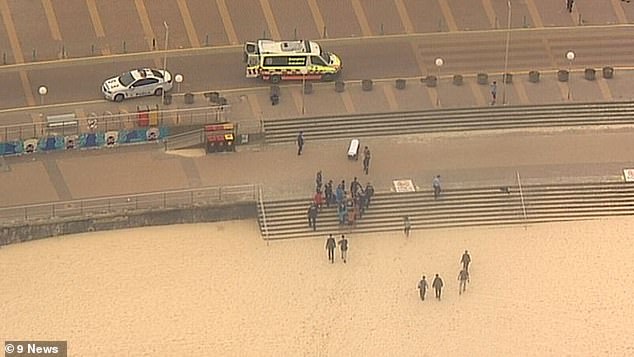 The swimmer, aged in his 40s, was found unconscious in the surf at Sydney’s Bondi Beach (pictured)