A 26-year-old man has died suddenly after developing both flu and altitude sickness while skiing with his family in Colorado.

James Flath, a tech worker from Missouri who recently started an NHL podcast, was feeling under the weather when he arrived at the resort with his girlfriend and his parents on Friday.

He went to urgent care on Saturday morning, where he was diagnosed with the flu.

Staying in to recuperate, he insisted that everyone continue with their dinner plans, assuring them he felt fine staying inside. However, when his parents and girlfriend returned to the hotel they found him breathing but unresponsive.

They rushed him to the hospital where he died on Sunday morning from respiratory failure attributed to altitude sickness.

James Flath, 26, from Missouri, felt sick when he arrived in Colorado on Friday. His condition plummeted and within hours he was fighting for life in hospital

Flath, who was due to be best man at his brother’s wedding in April, had just in January moved to a pharmaceutical marketing agency in Kansas, after working at Garmin International, a leading tech company which helps social media influencers earn money through advertising.

His parents described him as someone who ‘loved life’ while battling with sleep apnea for years, which may have complicated his symptoms.

‘It was a really unfortunate series of events,’ his father, Jim Flath, told Fox News.

The grieving father, also from Lee Summit in Missouri, said they had no sign his condition would deteriorate that fast.

‘He said, ‘Go have fun!’,’ Flath remembered of Saturday night when they were deciding whether or not to go to dinner. ‘I don’t think he or us realized how sick he was.’

It is not clear whether Flath got the flu shot this year, nor what strain of the flu he had.

His death comes days after the Centers for Disease Control and Prevention renewed calls for Americans to protect themselves against the flu, as we are currently experiencing a ‘second wave’ of B viruses. 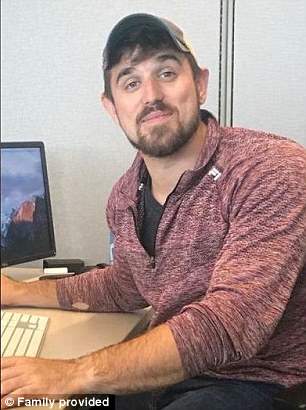 Flath’s parents described him as someone who ‘loved life’ while battling with sleep apnea for years, which may have complicated his symptoms

Thousands died this winter from the deadly H3N2 A virus, which is particularly resilient to the flu shot and other medications, and most Americans’ immune systems. While treatment is far more effective against the B virus, it is still aggressive and has claimed many lives, the CDC warns.

Altitude sickness is another deadly and easy-to-catch condition that is often dismissed as an unlikely killer.

In Colorado, the sickness is incredibly common, given that most of the state is high above sea level. According to a recent study, around 30 percent of tourists to the state’s mountain areas get altitude sickness. In Denver, which is a mile above sea level, that number drops to a not-insignificant 10 percent.

The illness does not discriminate – it affects all genders and ages. Though, obviously, people with sicknesses and the elderly are more susceptible, the risk is relatively uniform for the rest of the population.

In fact, experts say the most physically fit have the highest risk, because they exert themselves more than they should (it takes up to 36 hours to acclimatize).

To honor his memory, the family has launched a social media campaign called #Give4Jimmer, urging everyone to perform random acts of kindness.

‘Everyone is angry at each other and if we can do something to help people be a little less angry and kinder to each other then why not?’ Flath said.