Man drives across Sydney Harbour Bridge with his bonnet up

Up to no hood! Dangerous moment man drives across Sydney Harbour Bridge with the bonnet up

A man has been captured driving across the Sydney Harbour Bridge with his car bonnet up and hazard lights on.

The driver of the white station wagon can be seen travelling dangerously along the busy city-bound road despite his obstructed view.

An amused Sydney driver filmed the incident and shared it to Facebook on Saturday, adding their own commentary.

‘Today I’m on Sydney Harbour Bridge and we’ve got a dude driving with his bonnet right up,’ they said.

‘This is going to end up on Australia’s home funniest videos.’

The driver of the white sedan seems to get close to a median strip as the road bends, before straightening up again and travelling towards the CBD.

After making it across the bridge, the driver was able to safely pull over.

Social media users were quick to poke fun at the ambitious driver for the stunt.

‘Alrighty then,’ added another, referencing a scene in Jim Carrey’s Ace Ventura film where he drives his battered car with his head hanging out the window. 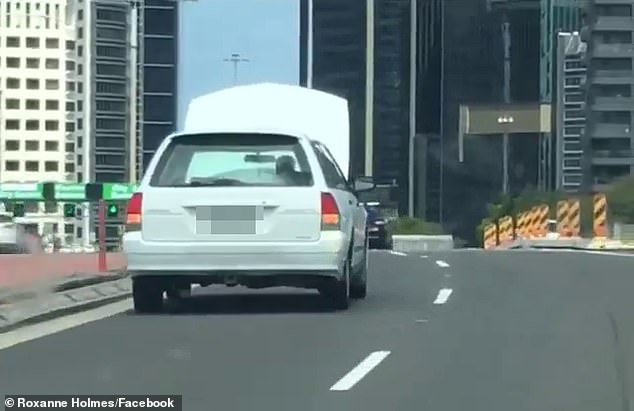