‘I gouged its eye with my left hand’: Man escapes man-eating shark by stabbing it in the head while his mate tried to pull the predator off him

A man has narrowly escaped an attack by a two-metre shark by stabbing the animal after it bit his leg while he was spearfishing.

Kevin Lloyd, from Kerikeri on New Zealand’s North Island, was with friends at the nearby Cavalli Islands when the mako shark attacked at around 11am Saturday.

He said he had just speared a kingfish after being in the water for about three hours when the shark ‘came out of nowhere’ and bit his leg.

‘I started stabbing it heaps with my knife and it didn’t quite like that so it turned around and bit my hand,’ Mr Lloyd told the New Zealand Herald.

Kevin Lloyd (pictured after incident) from Kerikeri on New Zealand’s North Island, was with friends at nearby Cavalli Islands when the mako shark attacked at around 11am Saturday

‘Then I was just trying to get my hand out of its mouth so I gouged its eye with my left hand – this is all while my mate’s holding on to the tail of the shark trying to pull it off me.’

The shark eventually let go of Mr Lloyd’s hand and swam away as the two men retreated to their boat.

The two then picked up a third friend who had been fishing in a different spot and headed for the coast and emergency services.

‘I was stunned. I couldn’t believe it was happening. We dive with sharks all the time but this shark we hadn’t seen,’ said Mr Lloyd.

He required 10 stitches in his hand at Bay of Islands Hospital and his leg wound was left to heal without being stitched due to a high chance of infection.

Mr Lloyd, who had just got back from the Pacific Islands where he was stationed with the Navy, said he frequently sees sharks but this was the first time he had ever been genuinely scared.

Mako sharks, while rare, are found throughout the world’s warmer oceans and, though known to be aggressive when provoked, they have only recorded one fatal attack on a human.

Despite the attack Mr Lloyd said he still managed to successfully land the kingfish he had just caught. 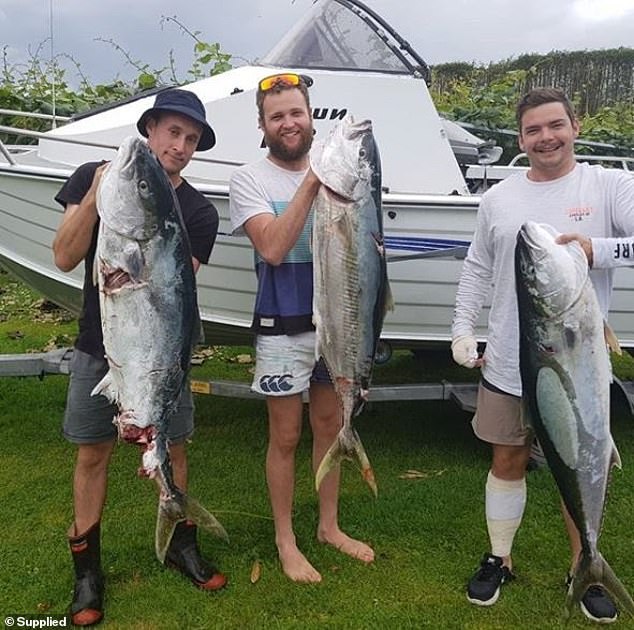