Man, 38, finds tooth in his NOSE in rare case of an ‘ectopic tooth’ that was affecting his ability to breathe

A new case report details a strange incident in which a man was discovered to have grown a tooth in his nose.

The 38-year-old, who was unnamed in the report published by Mount Sinai Health System in New York City, said he had trouble breathing through his right nostril for years.

Doctors examined him, and found a ‘a hard, nontender, white mass’ while performing a rhinoscopy, which they later determined was an ectopic tooth.

Ectopic body parts or functions – which means they are taking place where they should not be – are extremely rare,

While ectopic teeth are more common than other ectopic body parts, it is especially rare for one to appear in the nose.

An unnamed 38-year-old man was discovered to have had an ectopic tooth growing into his nose. He went to the doctor reporting breathing problems that had plagued him for years, and a rhinoscopy revealed the tooth. Pictured: The man’s tooth erupting into his nose, photographed during a rhinoscopy 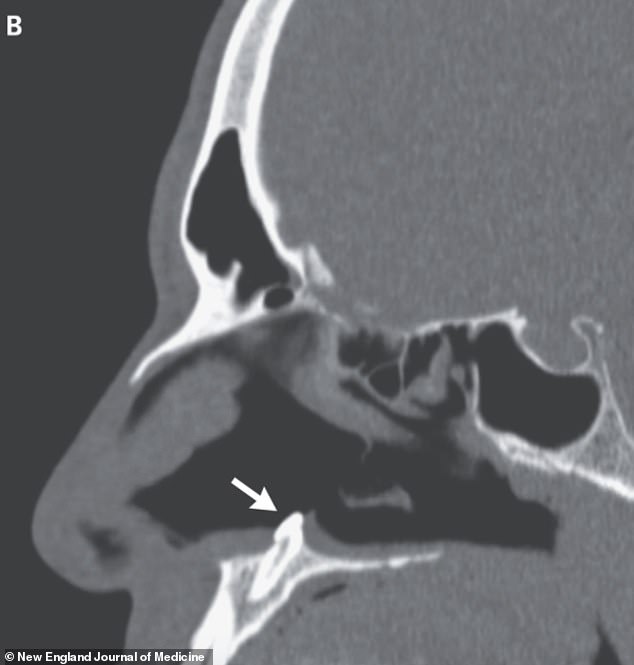 Entopic teeth are rare, and usually when they do occur it is not so severe that a person’s tooth gets so displaced in end up in the nose. Pictured: An x-ray showing the man’s tooth protruding into the nose

Doctors, who published a report on the man in The New England Journal of Medicine on Thursday, said the man had no other history of facial trauma or abnormalities.

An initial examination of the man at Mount Sinai found a deviated septum and calcified septal spurs.

They then performed a rhinoscopy, which occurs when physicians insert a small camera and a light into a person’s nose, and found the white object.

It was determined to be an ectopic tooth on X-rays, that had grown upwards from the mouth into the nose.

The man received surgery to remove the tooth and it was successful with no complications.

Three months after the procedure, the doctors report that his breathing issues have disappeared.

Ectopic teeth are rare, but not an entirely novel concept to many doctors.

‘Sometimes one or more teeth develop in the wrong position, end up getting stuck and remain buried in the jawbone under the gum,’ the National Health Service (NHS) Queen Victoria Hospital in Grinstead, England writes in an information sheet about the condition.

‘The most common ectopic teeth are the canine teeth in the upper jaw.’

The agency warns that not receiving treatment for these misplaced teeth can lead to further issues down the line, like the misplacement of other teeth and tooth gaps.

The NHS warns that leaving entopic teeth could displace other teeth, and lead to gaps in teeth and other issues over time. Around 0.1% to 1% of people will suffer from an entopic tooth. Pictured: An NHS published example of an entopic tooth

‘The main risk of this is that the tooth can bump into the roots of other adult teeth and cause damage,’ the NHS information sheet states.

‘Sometimes this can make them feel wobbly and eventually need to be removed. A cyst can also form around the buried tooth.

‘If you have a baby tooth and decide to keep it instead, this may be lost when you are an adult. In this case you will be left with a gap which may need to be replaced with a false tooth by your general dentist.’

Ectopic teeth are believed to appear in anywhere from 0.1 percent to one percent of people.

Cases like the Mount Sinai man are incredibly rare, though, as usually teeth remain in the jaw or the gums.

In this particular case, the appeared to ‘erupt’ upwards, and find its way into his nose.

The total size of the tooth with only 14 millimeters long, according to the published report.