Google Assistant is now capable of firing a handgun.

The artificial intelligent (AI) assistant has been filmed pulling the trigger for the first time as part of a new video project from artist Alexander Reben.

The 30-second ‘disturbing’ video shows the smart speaker process his command, and then pull the air pistol trigger — firing a round into an apple and knocking it from its perch next to the gun.

Google Assistant also responds, saying: ‘Sure, turning on the gun.’

An electromagnet taken from the change-dispensing mechanism in a laundromat was used to pull a string tied around the trigger and fire the pistol.

Reben used a voice-control enabled smart plug to control when the current passed through the electromagnet and set-up the Google Assistant to refer to the mains switch as the ‘gun’.

Although his demonstration uses a Google Home, Reben said he could have easily rigged-up the same remote-trigger mechanism with an Amazon Echo, or ‘some other input device as well’.

He hopes the video will start a debate around the boundaries of what AIs should be allowed to do.

‘Part of the message for me includes the unintended consequences of technology and the futility of considering every use case,’ Reben told technology blog Engadget.

Google likely never entertained the possibility that its Assistant would be used to shoot a weapon. 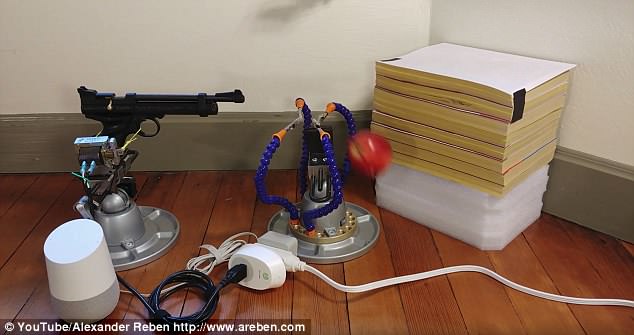 However, Reben was able to get the AI assistant to pull the trigger with parts from around his studio.

In this scenario, it is clearly Reben who issues the command, however, the artist, who is represented by the Charlie James Gallery in Los Angeles, California, has raised questions around responsibility.

In a world where machine learning has allowed smart assistants to increasingly anticipate our needs, it’s not a stretch to imagine a day in the near future when a virtual assistant would proactively pull the trigger in anticipation of a request to do so from its owner.

Who is responsible then? 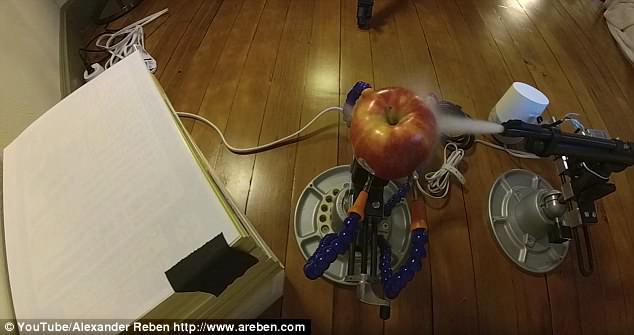 The roboticist and artist, who is represented by the Charlie James Gallery in Los Angeles, hopes the video will spark a debate about the implications of AI and the ‘unintended consequences of technology’

The video has sparked a reaction online, with some terrified by the footage, and others impossibly underwhelmed.

One YouTube viewer commented: ‘Big whoop. Computers have been shooting simulated guns for years, and stalking players and making intelligent decisions, even, in thousands of video games.

‘That AI that has been pulling in-game triggers all this time could easily have its output redirected to the real world, especially to do something as trivial as follow a command, like pulling a trigger or turning on a light.’

But another comment describes the video as proof that it is ‘the end of the world as we know it.’