Man flung into muddy puddle by massive pig in Canada

This is the hilarious moment a man gets flung from a wild boar’s back into a mud puddle after attempting to ride him at a farm in Canada.

The footage shows Jason Kenzie Humber, who describes himself as a professional extreme pet photographer, attempting to get his foot over the large pigs back before straddling him.

Humber attempts to hold on to the large animal’s woolly back but as he does the 500-pound boar spins around and flings him into the mud puddle filled with his waste.

Humber, 45, was filming his new project ‘My pet adventures’ in Alberta, Canada last May.

He said: ‘I wanted to turn the pig around to face the camera so I could talk about him.

Big and small: The 500 pound Mangalitsa pig with the farmyard cat. As part of his project, Jason films all sorts of animals

‘He wouldn’t cooperate so I started by joking about riding him.

‘When he didn’t move I decided to go big or go home and jumped on him.

‘I knew he would kick me off but I never thought I would be thrown into his mud hole filled with his poop.’ 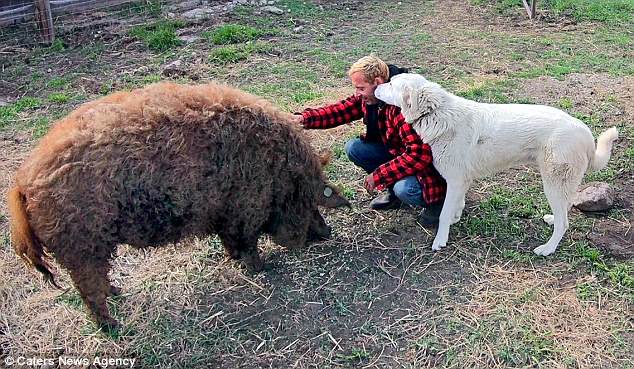 Making friends: Jason claims that he wanted to film the pig but he wouldn’t co-operate so he decided to  jump on him

As part of his project, Jason films footage of all sorts of animals, including the 500-pound Mangalitsa pig.

‘The photo shoot was a success and getting a little muddy never killed anybody. 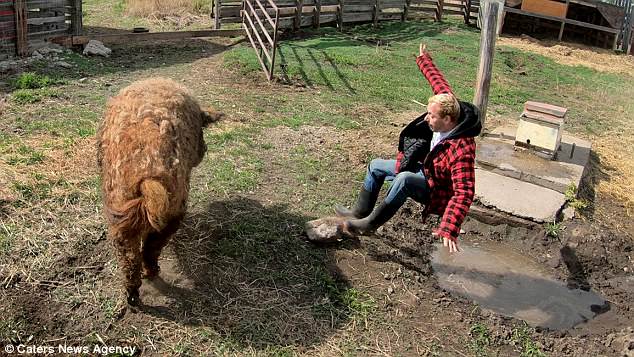 Hogwash:  Humber is thrown into the puddle filled with the part wild boar’s waste  after trying to clutch onto his hairy back 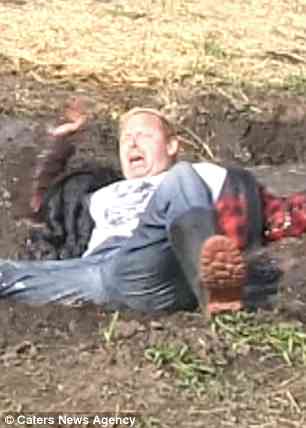 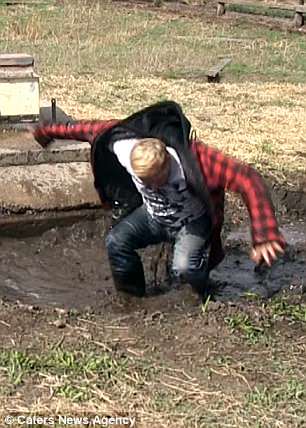