A man has been found guilty of murder after torturing and beating his girlfriend’s six-year-old son to death with a broomstick and steel shower curtain rod in his squalid New York apartment.

Rysheim Smith, 45, was convicted by a jury in Manhattan Supreme Court on Wednesday over the brutal bludgeoning to death of Zymere Perkins.

Zymere died in September 2016 after being waterboarded, savagely beaten and hung from the bathroom door by his t-shirt in Smith’s Harlem apartment.

The jury deliberated for 12 hours before finding Smith guilty of second degree murder, first and second degree manslaughter and endangering the welfare of a child.

He faces life in prison over his conviction.

The little boy’s mother, Geraldine Perkins, 29, had already pleaded guilty to manslaughter as part of a deal to cooperate against her now-ex-boyfriend.

The gruesome attack on the little boy left him with more than 30 fractured ribs. Zymere’s autopsy showed that his entire body was covered in cuts, bruises and scars when he died.

Rysheim Smith, 45, was found guilty by a jury on Wednesday in a Manhattan court over the brutal 2016 death of Zymere Perkins 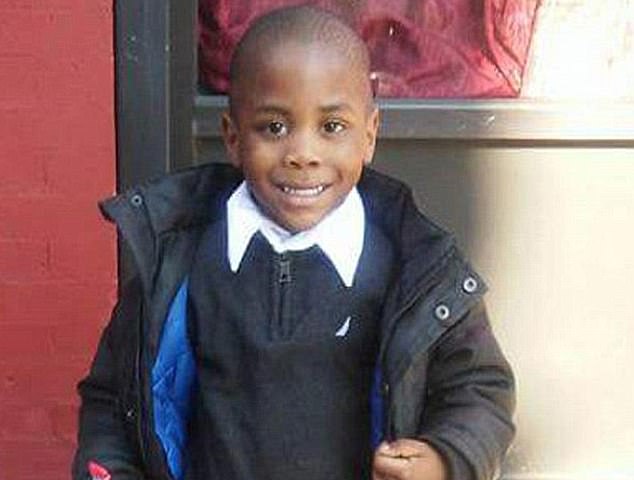 Zymere Perkins died in 2016 after being waterboarded, savagely beaten and hung from the bathroom door by his t-shirt in a squalid Harlem apartment

‘As proven at trial, Zymere was an innocent and helpless six-year-old boy who suffered unconscionable, ongoing violence at the hands of Rysheim Smith,’ Vance said.

‘Now, a Manhattan jury has rightly held the defendant accountable for this horrific murder.’

Zymere’s torturous death was so horrific that it prompted changes within city’s Administration of Children’s Services.

Waterboarded and beaten to death with broomstick: The harrowing final moments of Zymere’s life

Smith was accused of killing Zymere on September 26, 2016 after flying into a rage when he discovered the boy had defecated in the living room and attempted to hide the mess.

The night before the brutal killing, the court heard that Perkins and Smith had eaten Chinese take-out in front of the starving boy.

Perkins said Zymere had been forbidden from eating or drinking for 24 hours as punishment but she couldn’t recall what for.

The boy went to sleep alone that night curled up on the living room floor.

Hours later, Perkins said she woke to hear a rummaging in the living room and assumed at first that it was a mouse moving through the trash-filled apartment.

She said she went out to the living room and found her son going through the garbage and eating scraps of food. Perkins testified that she grabbed the trash bag from her son and went back to sleep.

The next morning, the court heard that Smith had found Zymere had defecated in the middle of the living room.

Perkins testified that when she came out of the bedroom, she found her boyfriend standing over her son and prodding him with the sharp end of a broken broomstick. 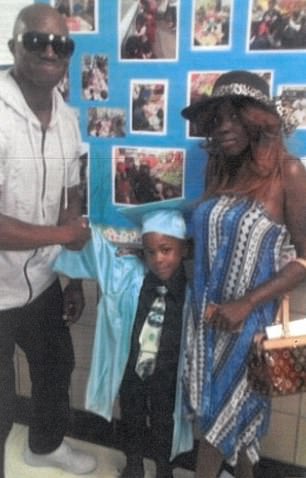 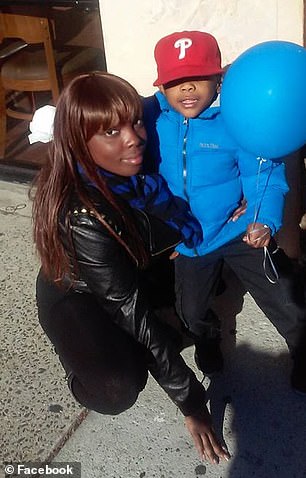 Zymere died in September 2016 after being waterboarded, savagely beaten and hung from the bathroom door by his t-shirt in Smith’s Harlem apartment. The little boy’s mother, Geraldine Perkins, 29, had already pleaded guilty to manslaughter as part of a deal to cooperate against her now-ex-boyfriend 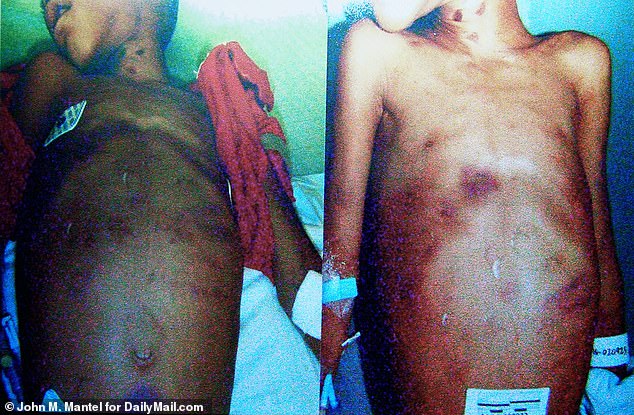 Doctors said Zymere, who weighed just 35 pounds at the time of his death, sustained more than 30 rib fractures during the beating. Gruesome autopsy images were shown during the trial that showed Zymere’s entire body covered in cuts, bruises and scars 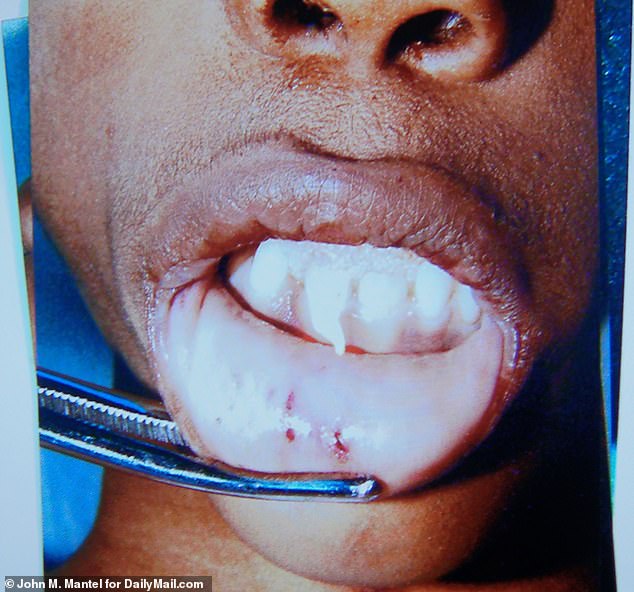 Dark bruises were visible across his body, around his neck and across his face. The little boy had puncture wounds inside his mouth from his own teeth

‘Why the f**k did you take a s**t? Why did you take a f**king s**t in here? There’s a bathroom, you could have used the bathroom,’ Smith allegedly said to the boy every time he beat him.

The boy’s mother told the court that she stood by idly while Smith savagely battered her son. Perkins testified that her son did not say a word during the beating and just lied on the floor shaking.

The little boy’s underwear and shirt were smeared in feces.

She claims the abuse intensified moments later when Smith picked up a now-screaming Zymere, took him to the bathroom and waterboarded him.

Smith allegedly pulled down the shower rod and continued beating the boy.

‘He was going limp, like unresponsive,’ Perkins testified. ‘I figured he was just faking.’

Perkins said Zymere had previously pretended to be unconscious in a bid to get Smith’s beatings to stop.

Smith then allegedly hung the unconscious boy on a hook on the back of the bathroom door with his clothes dripping with water and blood.

Perkins claims Smith took her son down a while later and threw his limp body into a bedroom. The little boy landed between the wall and the bed, authorities say, and Perkins testified that her son ‘looked like he was dead’. 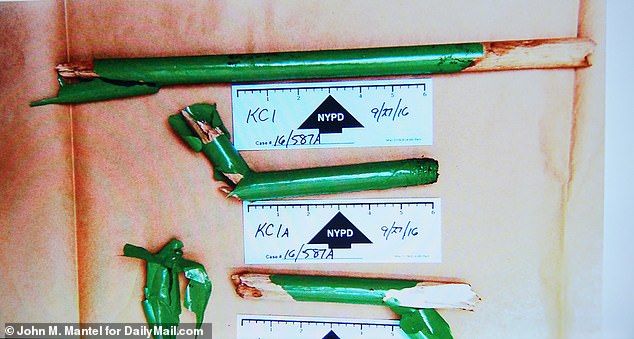 During Smith’s trial, the court was shown pieces of the broken broomstick that was used to beat the little boy to death 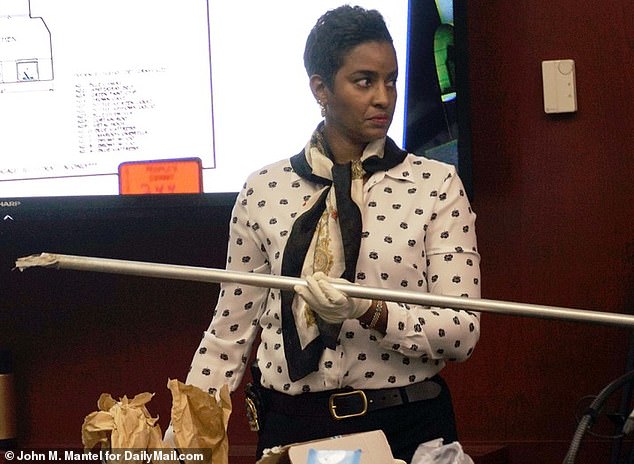 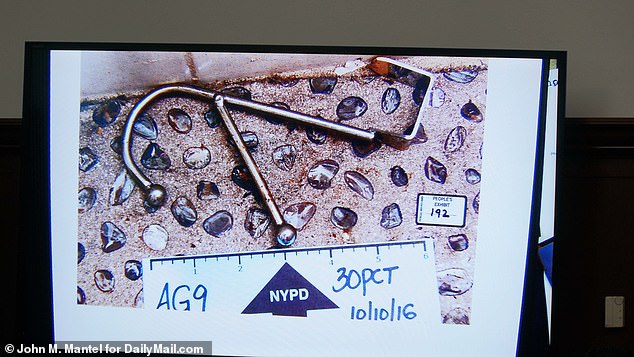 Smith allegedly ordered Perkins to clean the apartment while he went out to get food.

Perkins claims about 30 minutes later she realized her son wasn’t breathing but went about cleaning and reading the Bible for several hours.

Prosecutors say Perkins made a feeble attempt to resuscitate her son with mouth-to-mouth and chest compressions.

She then bathed the little boy’s body in the bath to wash off the blood before lying him on a bed and waiting for Smith to return home.

‘I was hoping he’ll just wake up out of whatever was going on with him. I was just hoping he’ll get up,’ Perkins testified. ‘(I was thinking) that my baby is dead and I’m going to be in jail and I’m in a lot of trouble.’

When Smith returned home, he allegedly ordered Perkins to take the boy out of the apartment through a back exit and to avoid mentioning his address to anyone.

He allegedly told her to tell doctors or law enforcement that the boy had fallen ill with food poisoning at a homeless shelter.

Before leaving, however, Perkins spent 10 minutes applying her make-up and putting on a wig.

The gruesome evidence: Autopsy photos of his injuries and the squalid scene of his death

Doctors said Zymere, who weighed just 35 pounds at the time of his death, sustained more than 30 rib fractures during the beating.

Gruesome autopsy images were shown during the trial that showed Zymere’s entire body covered in cuts, bruises and scars.

Dark bruises were visible across his body, around his neck and across his face. The little boy had puncture wounds inside his mouth from his own teeth.

One graphic image shown to the court showed the little boy’s injured leg without any skin on it. 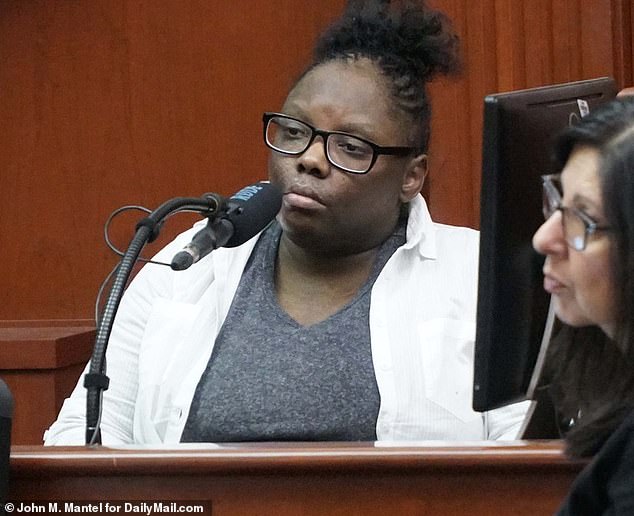 Zymere’s mother, Geraldine Perkins, 29, has already pleaded guilty to manslaughter as part of a deal to cooperate against her now-ex-boyfriend 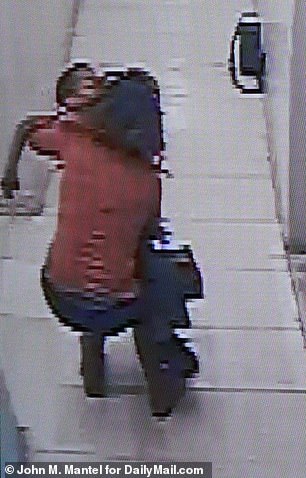 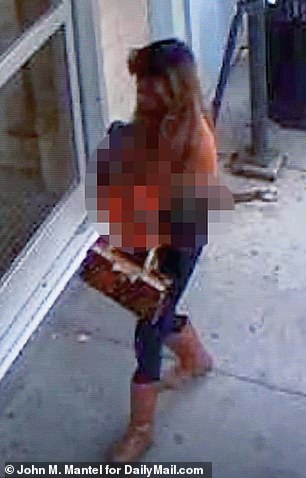 Surveillance video captured Perkins carrying Zymere’s lifeless body out of the building before a passerby helped flag down a taxi. The mother was captured on cameras walking into the hospital carrying her son’s body

The court was also shown various evidence photos, including the blood-covered broken broomstick and the steel shower curtain rod that were used to beat the little boy.

Prosecutors also showed the hook that Zymere was hung from by his t-shirt on the back of the bathroom door.

Jurors were shown surveillance footage of Perkins carrying her son’s lifeless body out of the apartment building as his right arm swung limply towards the ground.

The video captured a passerby helping her to flag down a taxi before the mother was shown on surveillance cameras walking into the hospital carrying her son’s body.

Photos and footage of Smith’s squalid apartment were also shown to the jury as evidence during the trial to give them a glimpse of Zymere’s horrifying reality.

The footage, which was taken by the NYPD in the days after Smith’s arrest, showed the cluttered living room where Zymere had gone to sleep the night before he died.

It showed dirty clothes strewn across the floor, prescription pill bottles scattered across a table and a white bucket in the middle of the room filled with a brown substance.

The bathroom was covered in grime and rust, while the bedrooms were filled with piles of trash, dirty clothes, and broken furniture. 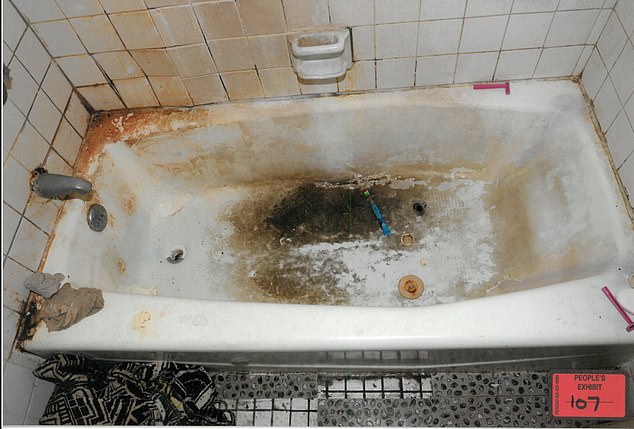 After beating the boy with the broomstick, Smith allegedly took the six-year-old to the bathroom where he waterboarded him in the squalid tub 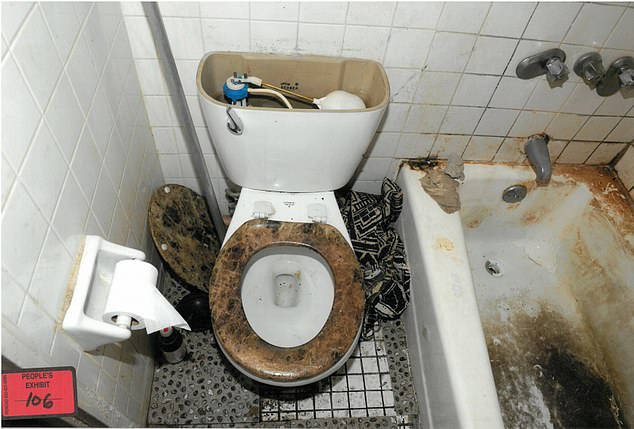 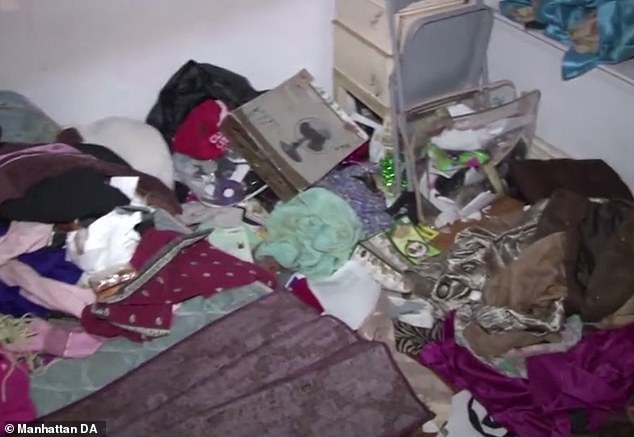 Prior to his death, the court heard that Zymere had been subjected to years of unrelenting abuse and neglect.

It emerged during the trial that child protection agency had received a total of five reports of abuse regarding Zymere.

A video was shown to the court of Zymere at the Manhattan Advocacy Center in April 2016 – just five months before his death – after his teachers reported suspected abuse when they spotted him walking with a limp at school.

The footage showed him playing with Play-Doh and speaking to a child welfare worker.

A month later, a nurse at Zymere’s school noticed a bump on his head, which he said was just a mosquito bite.

His mother testified that she regularly deprived her son of food and water as a form of punishment.

She also admitted to whipping her son with a belt in order to avoid bruising her hands because she suffered from the autoimmune disease Lupus.

Perkins claimed that her boyfriend would force Zymere to take freezing cold showers and once forced him to stand all night in a corner.

She told the jury that Smith, who has two adult children of his own, encouraged her to dish out cruel punishments to her son.

‘He said the disciplines he did with Zymere he did with his sons and that’s how they became good men,’ Perkins said.

‘I thought if they grew up right then this should be good for my child, too.’