The leader of one of America’s most prominent devil-worshiping churches says he turned to Satan to help him cope with the guilt of killing a man in self-defense.

Adam Daniels, 35, is the ‘dastur’ — or high priest — of the Church of Ahriman, which is based in Oklahoma City.

The Church of Ahriman has 15 members and worships Ahriman, another name for the original Persian devil figure Angra Mainyu — the God of Hell.

Worship: Adam Daniels (pictured with his wife Kelsey), 35, is the ‘dastur’ — or high priest — of the Church of Ahriman, which is based in Oklahoma City 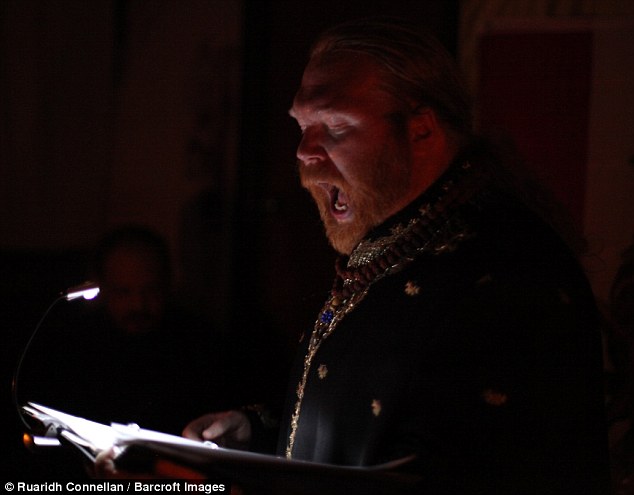 Past: Adam (pictured performing an exorcism in his ceremonial chamber) says his life changed after he killed a man in self-defense when he was 19 years old

The church’s followers meet in Adam’s home. He has converted a storage room into the ritual chamber in which he performs ceremonies, including devil-worshiping weddings and Satanic exorcisms.

However, Adam’s beliefs were not always so fiery. Before turning to the devil, he was actually a Buddhist.

He claims his life changed forever when, at the age of 19, he was working in a convenience store when an armed attacker stabbed a customer with a knife and then turned his attention to him.

Adam says he defended himself using the martial art Aikido, but the attacker landed badly and died. The scene was caught on video surveillance and no charges were brought against him.

‘He went to stab me and I had to end up defending myself, and the guy busted his head open like a pumpkin all over the floor,’ Adam said.

‘It was a life-changing event for me because you’re not expecting to have to kill somebody. 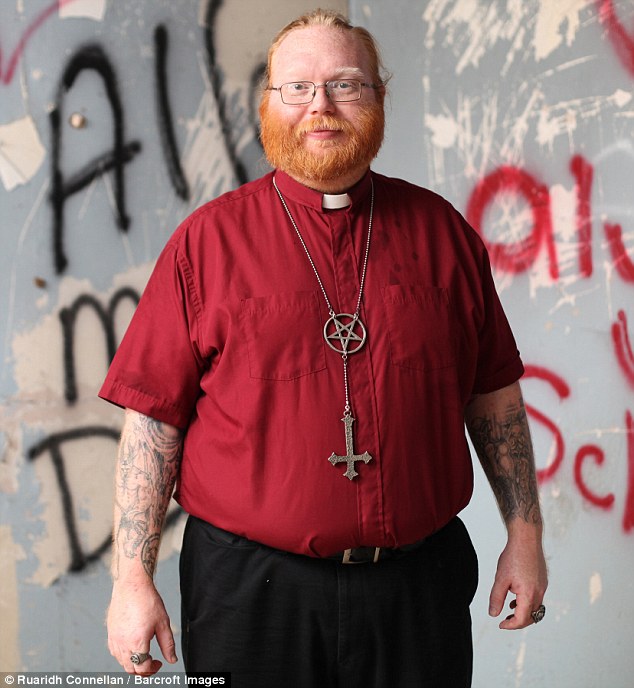 Process: First, Adam began to see a therapist and turned to a variety of religions — all of which suggested he should have turned the other cheek 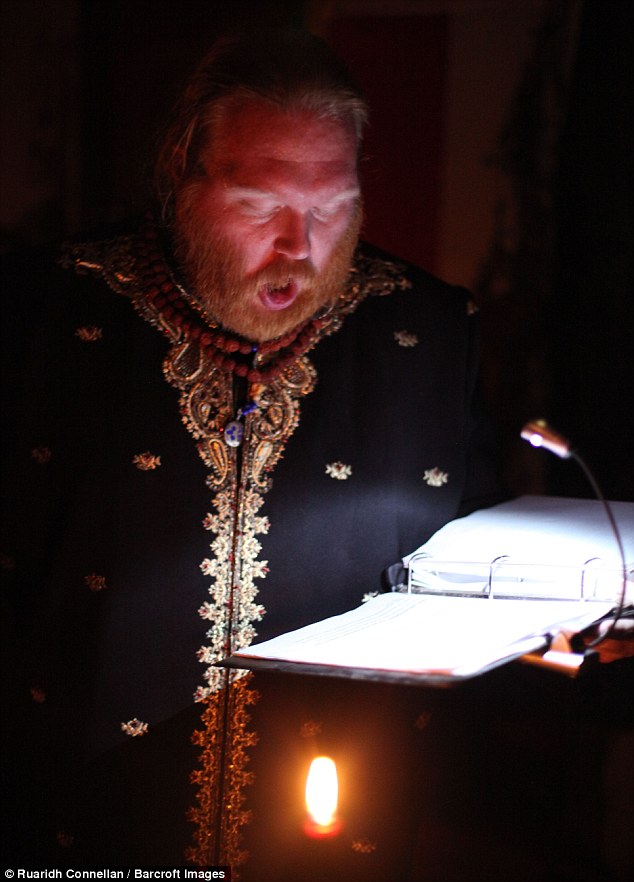 Ritual: Adam (pictured performing an exorcism) eventually found comfort in The Satanic Bible by Anton LaVey, whose motto is ‘self-preservation is the highest law’

Seeking a way to come to terms with ending another person’s life, he began to see a therapist and turned to a variety of religions — all of which suggested he should have turned the other cheek.

‘I tried to find solace and I was told that I had committed the sin of wrath by the Christians and the Buddhists — even by my mom,’ Adam said.

He ended up finding comfort in The Satanic Bible by Anton LaVey, whose motto is ‘self-preservation is the highest law’.

‘Devil-worshiping became the tool to allow me to deal with my inner demons, it gave me the strength I needed,’ he added.

Adam is joined in his church by wife and childhood sweetheart Kelsey, 33, who plays a key role as ‘mobed’ — one of the higher-up priests.

In addition to her treasurer and secretary duties, she donates her menstrual blood for use in some of the group’s rituals. 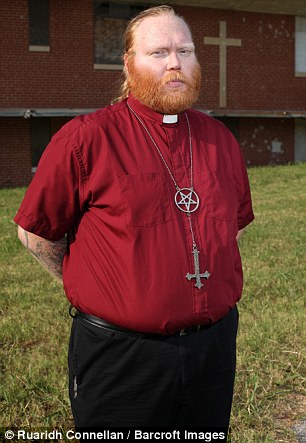 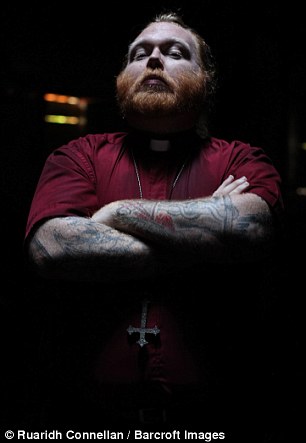 Family: While Adam’s 14-year-old daughter said she sometimes feels like an outcast due to her father’s religion, he is determined to stick with his beliefs

Adam’s teenage daughter Amber is more ambivalent about growing up in a devil-worshiping household.

‘Having a dad that worships the devil is just feeling like an outcast, like nobody wants to be around you, they hate you or are scared of you or something and it’s kind of hard to keep friends sometimes,’ Amber, 14, said.

She recounted how when she was six, she was given a necklace inspired by Baphomet [an ancient deity, traditionally depicted as a horned goat], wore it to school and was told by a teacher that she wasn’t allowed to wear it. Amber removed the necklace and put it in her backpack.

‘In sixth grade my grandma got me to go to my local bookstore and was able to get my full name printed on the Holy Bible — which my parents threw away,’ she added.

But Adam is determined to stick with his religion regardless of his children’s feelings.

‘What if my kids wanted me to stop? We’ve already had that conversation and that isn’t going to happen,’ he said. 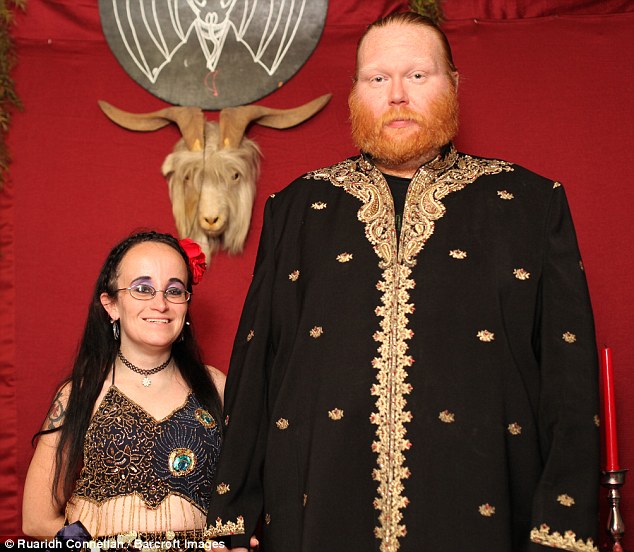 Role: In addition to her treasurer and secretary duties, Adam’s wife Kelsey (left) donates her menstrual blood for use in some of the group’s rituals 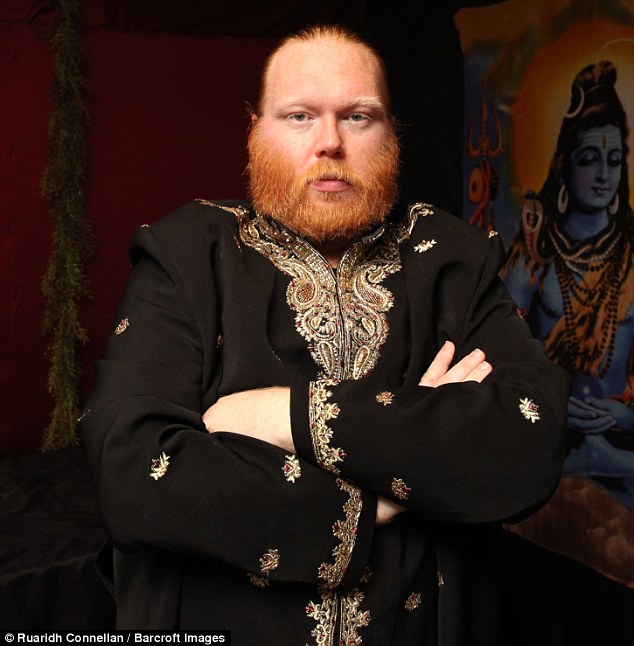 Blasphemy: Part of the group’s practice involves intentionally blaspheming, and Adam says he has burned the holy books of all of the world’s major religions

Being based in Oklahoma, where almost 80 per cent of adults describe themselves as Christian according to research by Pew Research Center, the group’s antics are not well received by the local population.

The Church of Ahriman’s decision to hold a public Black Mass in August 2016 drew thousands of protesters.

‘Being a Satanist in the Bible Belt can be restricting, it’s hard to keep work, it’s hard even to get work,’ Adam said.

‘Once people know they treat you differently. I’ve lost contact with basically every member of my side of the family.

‘We still have contact with Kelsey’s parents, but beyond that none of my family will even deal with me anymore.’

Part of the group’s practice involves intentionally blaspheming, and Adam says he has burned the holy books of all of the world’s major religions.

‘I have ritualistically burned the Holy Bible, the Quran, the Talmud, the Torah, Buddhist Sutras, different Hindu Sutras you name it, I’ve burned it out of blasphemy,’ he said.