A man needed a shower head removed from his body, after it had been pushed six inches into his rectum.

The 26-year-old man told doctors that he fell on the hand held shower head while in the shower, according to a BMJ case study.

However, the doctors, from Ram Manohar Lohia Hospital and Post Graduate Institute of Medical Education and Research in New Delhi, say in the report that they felt ‘high suspicion’ that the object was actually put there for ‘auto-erotic purposes’.

The man went to hospital having detached the shower head along with some of the piping, after discovering he couldn’t remove it at home.

After an initial examination, doctors found that he was otherwise in good health and was not actively bleeding. The man denied having had any such incidents in the past, or voluntarily inserting objects into his rectum.

X-rays revealed the handheld shower extending six inches into his rectum, but no tearing, according to the report.

The patient was taken to an operation theater and a general anesthetic applied for removal. 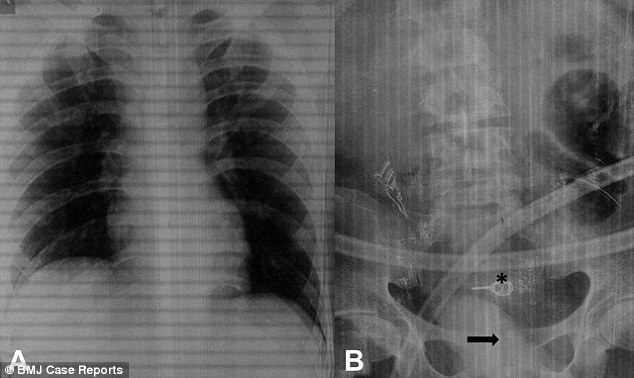 Pictured: A metal coil from the shower head, which had been impaled the man by some means

The doctors reached in and closed the water spout at the top of the head, which had been sticking out, so that it was in line with the rest of the head. This may have been the reason the shower head was stuck.

The shower head was ‘gently removed’ from the patient. It was then measured at 15 cm, or six inches.

Following the successful extraction, he underwent further tests to make sure there was no damage to his lower bowel.

He was offered psychiatric consultation but refused it.

The patient was then discharged after 48 hours. 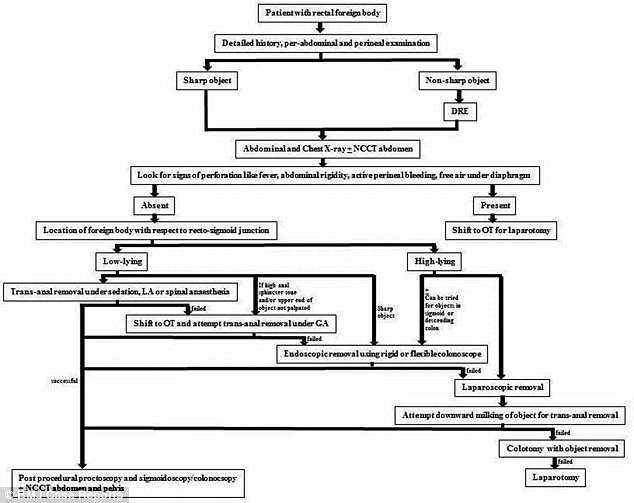 Pictured: A chart from the report describing various treatments for patients with this problem

The report goes on to state that ‘foreign body extractions’ from the rectum are fairly common.

However, information for each case can be hard to collect because patients often fear being stigmatize.

‘A proper history and examination is mandatory to look for signs and symptoms of perforation and infection, such as fever, severe abdominal pain and bleeding,’ the study author writes.

‘History is often ambiguous and incomplete due to a high level of embarrassment and social stigma attached to the condition. The same was seen in our case.

While these cases are most often not dangerous, the study authors note that in cases where there is internal bleeding or the patients condition is unstable, the object should be removed surgically.