An Australian man has embarked on a costly mission to buy a sausage sandwich from every Bunnings store in South Australia.

Melbourne vlogger Josh Eastwell set out on the challenge to buy the iconic sausage and bread combo from each of the hardware giant’s 20 stores in the state.

With a cameraman by his side, Mr Eastwell spent four days driving between each store and sampling the different snag offerings.

He said the mission was meant to be a test run ahead of attempting states with more Bunnings branches in a video shared to his YouTube channel.

‘The great Australian sausage crawl is just to get sausage and bread – or a snag – from every Bunnings in Australia,’ he said.

‘We’re going to South Australia to test the waters and then hopefully move onto some bigger ones.’

Including fuel, accommodation and sizzle costs, he said the entire trip cost him and his companion $715.

The duo were able to conquer all but two of the South Australian stores, with the one in Mt Barker to the east of Adelaide closing for the day as they arrived.

The 20th and final store at Port Lincoln was inaccessible due to a bushfire. 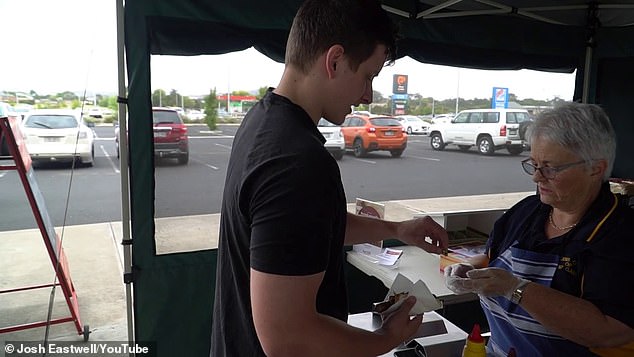 ‘It’s definitely not a journey for the weak-hearted seeing as you’re pumping your body with that much cholesterol,’ the vlogger (left) said

‘The best sausage sizzle in South Australia would have to be Seaford due to the variety,’ he said.

‘It’s definitely not a journey for the weak-hearted seeing as you’re pumping your body with that much cholesterol.’

The YouTube vlogger added he was next trying out Tasmania this weekend – the most Bunnings-light state with just seven stores. 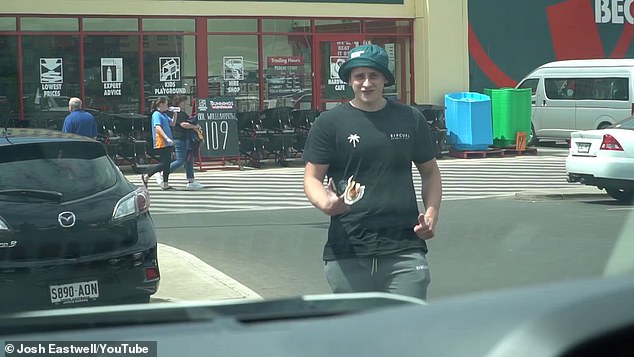 Mr Eastwell is pictured returning from one of the South Australian Bunnings stores with a sizzle in his hand. He now plans to take on Tasmania’s seven branches this weekend

‘My brother and I are headed there this weekend to bang out the few that are there. We’re flying over and hiring a car,’ he said.

‘I want to be listed among the greats as a pioneer of exploration in the modern era – the 2020 Robert O’Hara Burke and William Wills, the modern-day Sir Charles Kingsford Smith.’

Victoria boasts 75 stores and New South Wales has a massive 90, which would turn the challenge into a matter of weeks not days.