Man had filed a wrongful death lawsuit prior to shooting

The man fatally shot in Ohio after police said he ambushed and wounded a judge in a shooting had filed a wrongful death lawsuit that could be thrown out next week.

Richmond fired at the judge several times as the official walked into the Steubenville courthouse, before the father was shot dead by both a probation officer and the judge who was armed and returned fire.

Bruzzese was rushed via helicopter to a hospital and is in stable condition. He is expected to survive his injuries.

It’s now been revealed that Richmond filed a wrongful death lawsuit in Bruzzese’s court back in April.

Judge Joseph Bruzzese Jr, 65, (pictured) was shot and wounded in Steubenville, Ohio on Monday. He was walking into work when Nathaniel Richmond fired at him. Bruzzese was armed and returned fire five times on Richmond. He is in stable condition at a Pittsburgh hospital 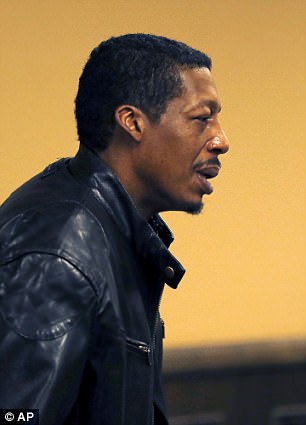 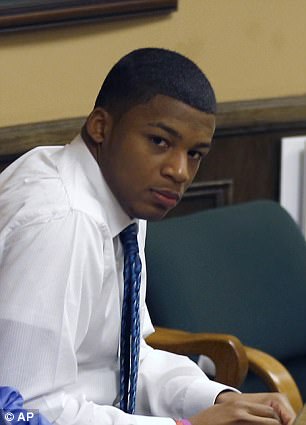 Richmond (left) is the father of Ma’Lik Richmond (right), who was convicted in 2013 for raping a 16-year-old girl at an alcohol-fueled party in 2012. Ma’Lik was recently told he couldn’t play football for Youngstown State University this season 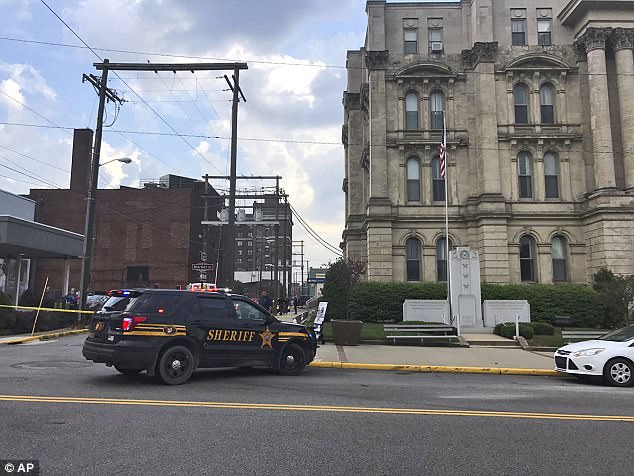 Bruzzese, 65, is in stable condition and is expected to survive his injuries from the shooting (scene above). It’s now been revealed that Richmond filed a wrongful death lawsuit in Bruzzese’s court back in April

In the lawsuit, Richmond alleges that the Jefferson Metropolitan Housing Authority (JMHA) was responsible for the death of his mother, Mae E. Richmond and death of his 2-year-old great-nephew as a result from a house fire in 2015.

Richmond’s lawsuit alleges the home had exposed electrical wires and had missing and inoperable smoke alarms.

A hearing is scheduled for August 28th in which the judge was to consider the JMHA’s motion to dismiss all punitive damages and another claim that critical evidence was lost when the house was torn down immediately after the fire.

Authorities said on Tuesday that surveillance footage captured the shooting scene where Richmond had fired at least five times at Bruzzese who was armed and fired back. At least one of his bullets hit Richmond, according to officials.

Jefferson County Sheriff Fred Abdalla said the surveillance video shows Richmond arriving at a nearby bank a short while before the shooting, left and then returned and shot the judge as he walked into work. 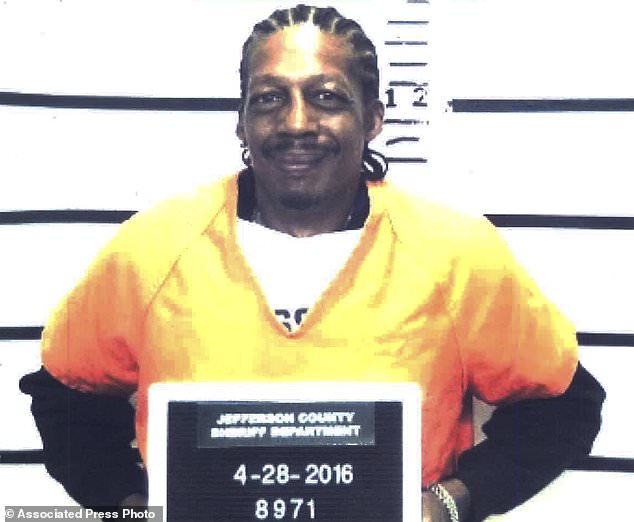 In the lawsuit, Richmond (above in a booking photo from 2016)alleges that the Jefferson Metropolitan Housing Authority (JMHA) was responsible for the death of his mother, Mae E. Richmond and death of his 2-year-old great-nephew as a result from a house fire in 2015 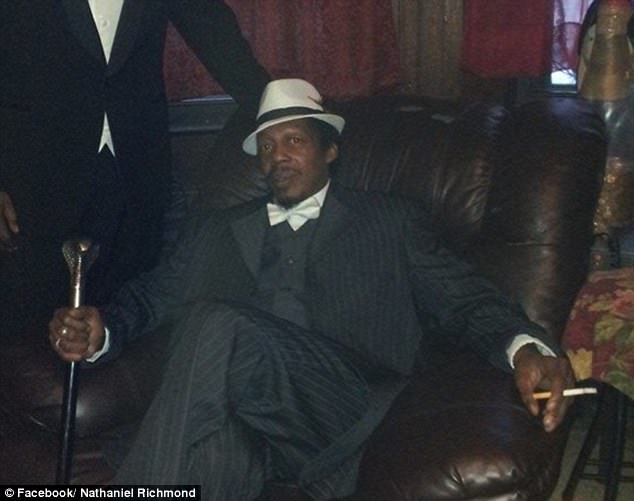 Richmond, seen in a Facebook photo, reportedly had a criminal history and a case pending at the courthouse where the shooting occurred

Richmond’s son Ma’Lik was convicted in 2013 of raping a 16-year-old girl and the young man was recently told he couldn’t play football for Youngstown State University this season. Bruzzese didn’t preside over Ma’Lik’s rape case.

Ma’Lik served about 10 months in a juvenile lockup after being convicted with another Steubenville High School football player of raping the girl during an alcohol-fueled party in 2012.

The case brought international attention to the eastern Ohio city of 18,000 and led to allegations of a cover-up to protect the football team.

Youngstown State announced on August 10 that Ma’Lik would not be playing football this season but would remain part of the football program and participate in practice.

Ma’Lik was a walk-on for the team in January but a student recently launched a petition that called for his removal from the team, citing his rape conviction.

Investigators are still looking for a motive in the shooting and haven’t found a connection to the rape case, said Jefferson County Prosecutor Jane Hanlin.

A visiting judge from Hamilton County, where Cincinnati is located, handled the vast majority of the rape case. 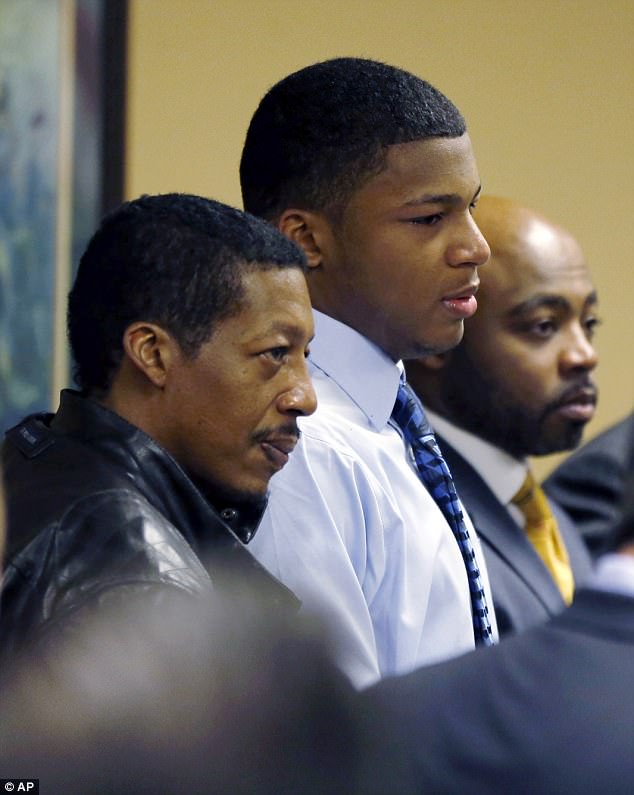 Investigators are still looking for a motive in the shooting and haven’t found a connection to the rape case. Pictured: Richmond and Ma’Lik in 2013

Courthouse video on Monday shows both the judge and Nate Richmond firing about five times each, Abdalla said.

‘Whoever thought this could happen here?’ Abdalla said.

‘He’s right up to the judge. And that’s when he fires another round and he shoved the judge over and then he takes off running towards his vehicle.

‘This individual laid in wait, for our judge, and … it just hurts. First thing on a Monday morning. You have a judge shot in front of his courthouse, and that affected me. …

‘This was ambush and attempted murder on our judge. Thank God he’s not that good a shot.’

Jefferson County Juvenile and Probate Judge Joseph Corabi said the attack had to be intended because people don’t know where judges park.

Corabi said he and other judges park in reserved spots next to the courthouse and then walk a few feet down what’s known as ‘Courthouse Alley’ to a side entrance to the building.

Corabi added that Bruzzese is known as an avid hunter. He called him fair, hard-working, well-liked and ‘a tough son of a gun.’

‘He is very intelligent and he can cut to the chase,’ Corabi said. ‘He spots issues and he resolves the issues.’ 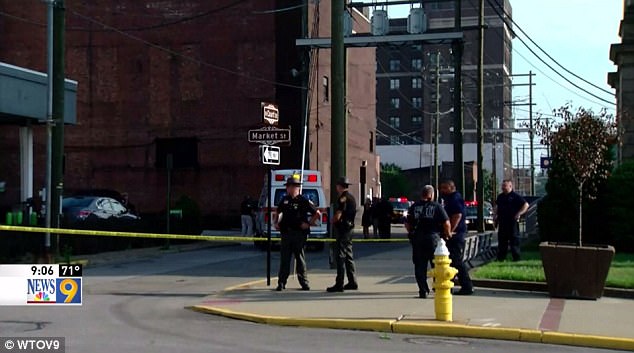 Another man who was in the car with Richmond was taken into custody. Pictured: The scene where the shooting happened 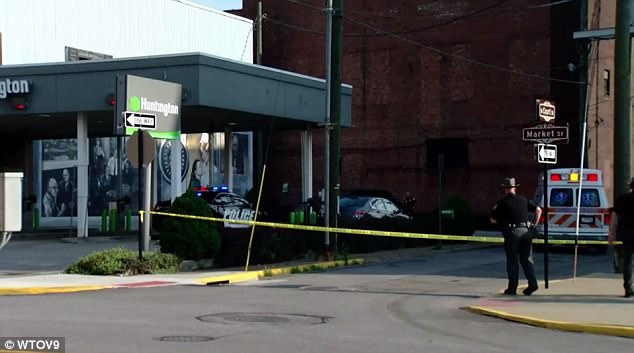 Richmond was hit once by Bruzzese but killed by a probation officer. The gunman’s body could be seen lying next to a car of a neighboring bank drive-thru (pictured)

Richmond’s body could be seen lying next to a car of a neighboring bank drive-thru. Police say a man who was in a car with Richmond was taken into custody.

Abdalla said a passenger in the man’s car is not considered a suspect at this time but is being questioned.

‘He didn’t get out of the car,’ Abdalla said. ‘Supposedly according to him, he wasn’t aware what this guy was going to do.’

The second man was grazed by a bullet and taken to a nearby hospital, reported Weirton Daily Times.

The newspaper reports that he also told police he and Richmond had been drinking the night before when Richmond said he had to be in court on Monday morning.

Richmond had a criminal history and a case pending at the courthouse where the shooting occurred.

Steubenville City Manager James Mavromati said: ‘We’re starting to put this whole picture together, but basically what you have is the judge is going to work, these subjects were waiting for them.

‘He comes up, shoots at the judge. The judge returns fire. We also have a probation officer that was behind the judge. He returns fire as he is shot at. The subject is deceased that he shot at.’ 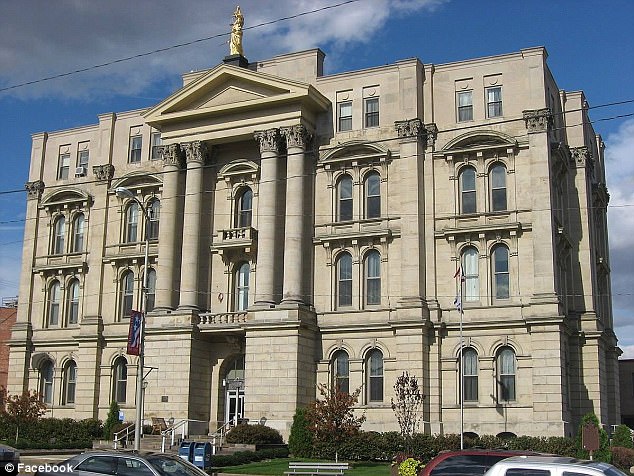 The courthouse is just across the Ohio River from West Virginia’s northern panhandle, roughly 30 miles west of Pittsburgh.

Jefferson County Commissioner Thomas Graham said that some courthouse workers witnessed the ‘tragic situation’ and that people would need time to process what had happened.

Bruzzese has served on that court since 1997, according to Ohio Supreme Court records. He was most recently re-elected in 2014 for another six-year term.

The judge was flown to a Pittsburgh-area hospital. Republican Governor John Kasich said he was told Bruzzese would survive. 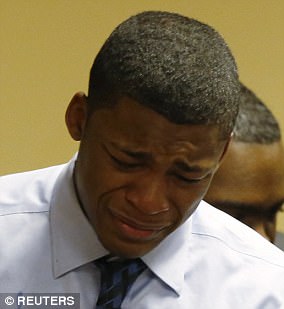 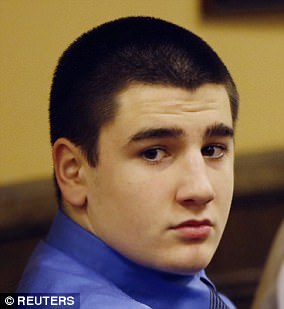 Ma’Lik Richmond was 16 when he and Trent Mays digitally penetrated a drunk, underage girl in August 2012, an act classified as rape under Ohio law.

The shocking details of the assault, photos of which the assailants shared on social media, reverberated across the country and intensified a national debate about rape culture.

Richmond and Mays were teammates on the high school football team when they attended a string of parties on the night of the assault.

During the trial, the 16-year-old victim said she had no memory of the night in question other than a vague recollection of vomiting on the street.

According to court testimony, Mays removed her shirt in the back seat of a car and digitally penetrated her while friends filmed and photographed. 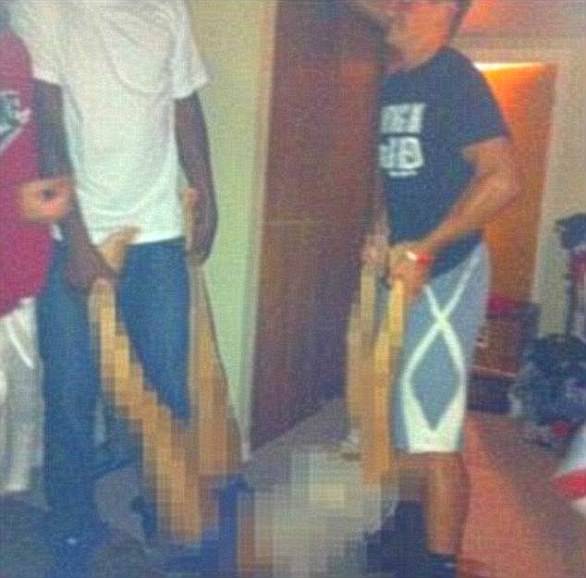 The victim was assaulted while other boys who were there took pictures and shared them. One such photograph which was used as evidence in the trial is seen above

She was carried unconscious into the basement of a house where Mays attempted to orally rape her, and Richmond also digitally penetrated her, the court heard.

Police analyzed hundreds of text messages as part of the investigation, as well as social media posts which described the attack.

Staff at Steubenville High School were indicted as part of the investigation and faced damning accusations they had tried to cover up what happened to protect some of the students involved.

Richmond was found guilty of penetrating the girl and sentenced to one year juvenile detention in March 2013.

Mays was convicted of penetrating the victim and using his phone to take a picture of her naked. He was sentenced to two years.