By Afp and Associated Press

A murder suspect held 23 children hostage at his daughter’s birthday party before he was shot dead by police in India.

Subhash Batham was killed last night as a 10-hour stand-off outside a house in Uttar Pradesh ended with all the children being rescued.

Batham had demanded that murder charges be dropped and sought a ransom of 10 million rupees (£110,000) per child, police said.

His wife was attacked by angry locals as she tried to escape and died of her injuries on Friday morning.

Batham was hosting the party for his daughter’s first birthday and the 23 youngsters included a six-month-old baby.

However, the party proved to be a ruse for Batham to keep the children captive while he demanded that the murder charge be dropped.

The hostage taker was out on bail over the murder charge.

Efforts to negotiate Batham’s surrender as anxious parents gathered outside the house had failed, police said.

‘We tried to negotiate with him but to no avail. Concerned over safety of the children, we eventually broke open the rear door of the house and shot him.’

Local media reports in Farrukhabad district said commandos had been flown in and were kept on standby. 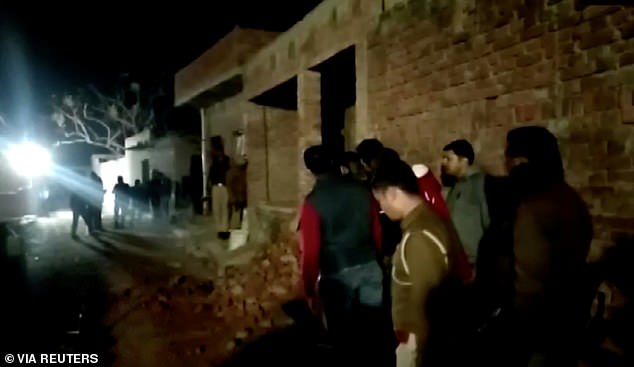 After the siege, a group of incensed villagers stormed the house where the children had been kept and attacked the hostage-taker’s wife.

‘She was rescued and taken to the hospital, but she succumbed to her injuries,’ Mishra said.

The hostages who were held at gunpoint were safe, local official Awanish Kumar Awasthi said after the raid.

Local reporter Deepak Kumar Srivastava told BBC News that Batham wanted to take revenge on local villagers after he was accused of murder.

‘He believed that locals were responsible for his arrest in the murder case and he wanted to take revenge,’ Srivastava said.

‘There was fear in the neighbourhood and nobody slept. Everybody was worried about the safety of children.’