Two men dressed as Harry Potter and Woody from Toy Story are on the run after allegedly trying to break into a hardware store twice in one night.

CCTV images from outside a Mitre 10 store in Emerald, an hour east of Melbourne’s CBD, showed the two men in costumes approaching the store on February 3.

The duo allegedly attempted to break into the store but left quickly when they realised the door was locked.

Footage from outside a Mitre 10 in Emerald, 44 km south-east of Melbourne, showed the two costumed men leering into the store on Tuesday

The men came back, still dressed up, in the same car, at 2am. The pair allegedly tried to jimmy the lock so they could open the front door.

They damaged the door but were still unable to get inside.

The man dressed as Harry Potter then removed his costume in defeat before  fleeing the scene with his mate.

Police are looking for the costumed men, who have both been described as Caucasian men, in connection with the alleged attempted robbery.

Investigators ask anyone with information to come forward.

They have also asked anyone who knows of costume parties in the area to contact Crime Stoppers. 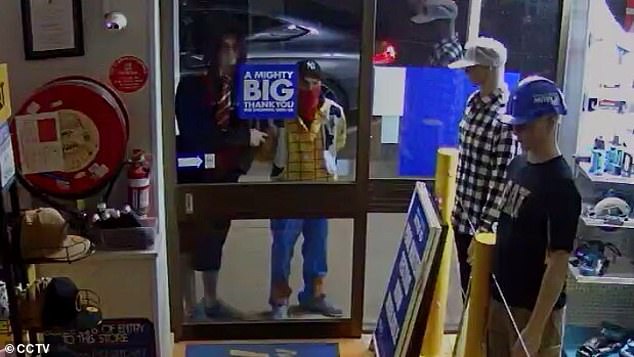 Police said the men left in a grey Mercedes sedan, believed to be stolen from Tempelstowe, with the false registration ATX214