A woman from Canada who came to visit her family in the remote province of Manitoba says she was shocked by a racist verbal attack she endured when she asked a stranger for directions.

After asking the man for information, moments later he suddenly turned and began yelling offensive phrases at her.

In an exchange captured on video, a man who described himself as a ‘Nazi’ told Calgary teacher Kaniz Fatima to take her ‘head towel off’ because it ‘supports Muslims,’ before telling her to ‘go back to your country.’ 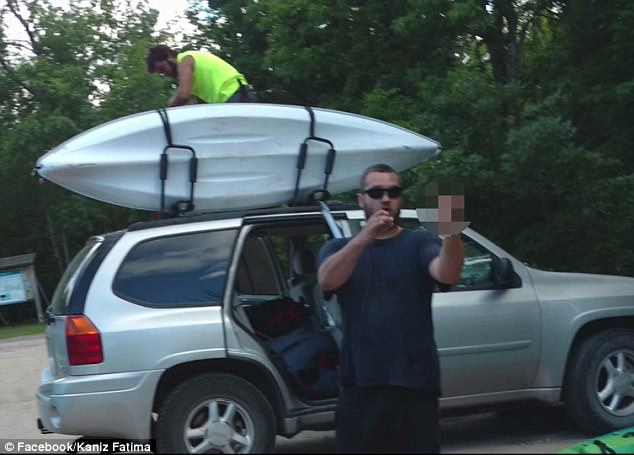 Moments later, he suddenly began yelling offensive phrases at her and swore at her 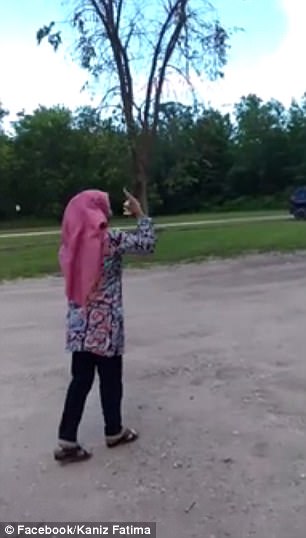 The entire offensive rant was captured on camera in Pinawa near Winnipeg, as Kaniz kept her cameraphone rolling throughout the tirade, which continued until passers-by told him to stop.

The disgusting video began with with Kaniz shouting: ‘You are being racist .’

Incredibly, Kaniz managed to keep her cool and asked the man why he felt the way he did. ‘Because it supports Muslims,’ he replied, telling her to go back to her own country.

‘This is my country,’ Kaniz replied.

At this point two passers-by interrupt the man’s tirade, with one woman shouting: ‘Excuse me sir, what are you doing? No seriously, this is embarrassing, don’t do that.’

Turning to Kaniz, the woman says: ‘You don’t even have to explain yourself because you’re just as much Canadian as he is. This is embarrassing. Don’t even let this bother your day.’

The woman then turns to the man saying: ‘Seriously just go. You have a problem. A serious problem.’

Writing about her experience on Facebook, Kaniz said: ‘Get ready to face those RACIST, filthy comments if you have your hijab on. It happened to me, it might happen to you.’

‘His comments actually shocked me a lot and then I was scared too,’ she said to CBC.

Fatima says she and her family eventually got in their car and drove away.

‘I felt a responsibility to talk against racism, to stand up against Islamophobia,’ Kaniz told CBC. 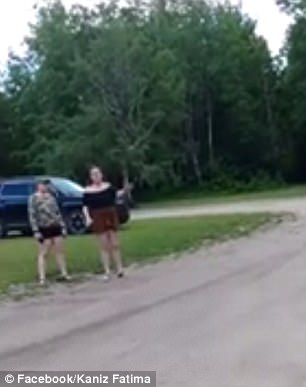 ‘I felt like I need to uphold my Canadian values and stand up for inclusion and justice because this is our country and we belong to this country.’

She praised the passersby who stopped to defend her.

Kaniz, who came to Canada from Bangladesh in 2009, said she’s never experienced anything like the racist attack before.

The disturbing footage come just weeks after hate-fueled marches took place at a rally in Charlottesville, Virginia, earlier this month.

Ever since Trump announced he was running for the White House in 2015, there has been a steady rise in the number of hate groups with almost 1,000 operating across the country.

Since 1999, the total number of hate groups in the US has more than doubled.