‘Man, I’m f***ing working’: Internet is left split by viral video of Steelers’ Mike Tomlin BRUTALLY shutting down a fan at halftime of Falcons win… so, do you think coach was in the wrong?

Pittsburgh Steelers head coach Mike Tomlin let a fan have it during halftime of Sunday’s game against the Falcons – even though the fan was wishing his team luck.

In the tunnel at halftime, a fan saw Tomlin walking past as the head coach was reading something off a piece of paper.

‘Coach Tomlin, let’s go for the win man!,’ the fan said to the coach, holding a thumbs up to him.

Tomlin was abrupt and direct in his response, telling the fan, ‘Man, I’m f***ing working,’ before walking off without a word.

Social media was split in its reaction to the coach’s response, with some praising his competitive spirit and others feeling the need to remind Tomlin who pays his salary.

Pittsburgh-area radio host Colin Dunlap brushed off the incident, saying, ‘This isn’t a big deal. It just isn’t. That said, I don’t understand why Mike Tomlin simply didn’t walk past and say zero.’

Others on Twitter felt that Tomlin shouldn’t behave this way, with one writing, ‘These people need to remember they arent that different than actors: WE pay their paychecks as fans. If it wasnt for US caring about what they do, enjoying watching them play & buying tickets to their games & wearing their jerseys, they would be working regular jobs like us.’ 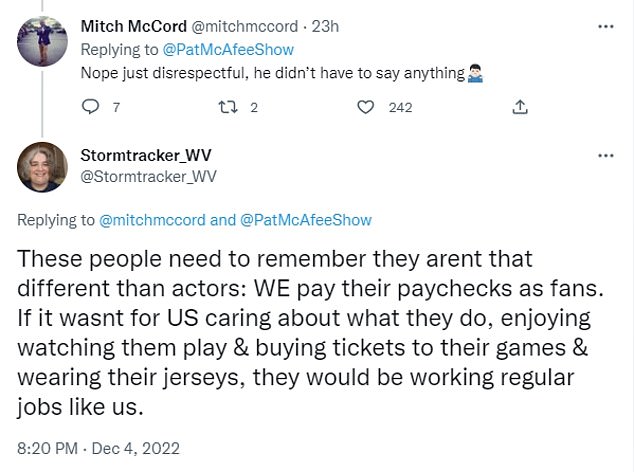 Fans on social media were divided over Tomlin’s behavior, with some criticizing his behavior

Tomlin was busy trying to keep his team’s 16-6 lead in check at the half and make sure they stayed focused to try and win their fifth game of the season.

They gave up ten points to the Falcons, but gained three of their own in the second half to escape Atlanta with a 19-16 victory.

With that win, the Steelers move to 5-7 on the season, but remain last in the notoriously tough AFC North.