Man in China sells his baby to suspected human traffickers

A Chinese father has sold his seven-day-old daughter to alleged human traffickers in a maternity hospital.

The police told a Chinese news outlet that the man had established contact with the buyers online before the baby was born.

It’s also said that instead of reporting to the police, staff at the hospital helped facilitate the deal by providing a fake birth certificate.

The incident was exposed in a recent report by Pear Video, a Chinese video news website.

The girl was seven days old when her father sold her in the hospital, according to the report.

A CCTV video shows that the incident occurred on March 14 this year.

According to the police, the father is from Xinyang, in central China’s Henan Province, and he had wanted to sell the child before she was born for unspecified reasons.

CCTV footage shows an alleged human trafficker (circled) holding the baby girl after her father sold her in a hospital in Xinyang, central China’s Henan Province 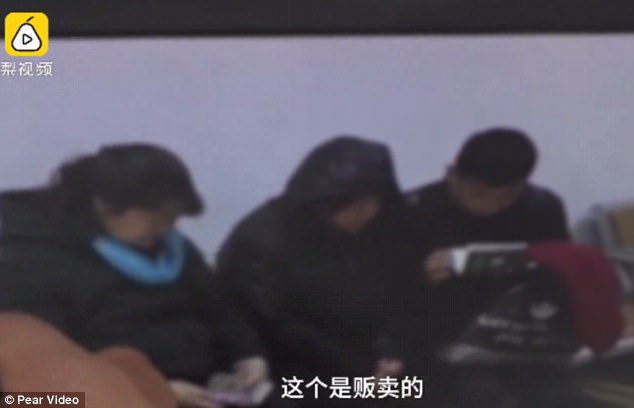 The group instructed the man to send his wife to the unnamed hospital to give birth.

Members of the group were also said to work with the hospital staff to obtain a fake birth certificate for the girl.

The deal was said to take place in the maternity hospital between the family of the baby girl and two human traffickers, known as Li and Song.

Apparently, the pair of alleged human traffickers sold the baby to a potential buyer in the hospital right after they bought her.

An officer revealed a video clip which showed one of the alleged traffickers meeting her customer.

Li and Song have been arrested by the police on suspicion of human trafficking.

Through the two suspects, the officers were able to arrest a group of nine suspected human traffickers. They have also saved five babies the group had bought.