Man, 22, with coronavirus is arrested for rioting at a Black Lives Matter without a face mask and refusing to social distance, even though he knew he was infected

A man who was arrested for rioting at a Black Lives Matter demonstration of 250 people in Pennsylvania has told authorities that he went out without a face mask despite knowingly having coronavirus.

Julio V. Torres, 22, wasn’t practicing social distancing measures at the event on Monday and drew attention to himself when he threw ‘objects which could cause bodily harm at police officers’ and spoke to other individuals in the crowd ‘appearing to be directing their actions’.

After he removed a barricade outside Lancaster Police Station and threw it into the middle of the street, cops chased him down, then he told authorities he had tested positive for COVID.

Torres resisted arrest by flailing his arms, kicking an officer in the side of the head twice and headbutting another cop, a police report states.

He was booked into jail on charges of riot, aggravated assault on police, resisting arrest and disorderly conduct, and held at Lancaster County Prison in lieu of $25,000 bail.

‘During the arraignment, it was discovered that (Torres) tested positive, was told to self-quarantine and chose to attend or participate in the protest without proper social distancing, without a proper face mask and has placed other people at risk — both the public who were peacefully participating in the protest and law enforcement,’ Lancaster County President Judge David Ashworth told Lancaster Online.

Torres said he had gotten tested at the Clipper Magazine Stadium and the results came back positive.

Health officials cannot do contracting because it was a large public gathering.

‘I am very concerned that the public and law enforcement has been placed at risk,’ Ashworth said. He said he was contacting the media because he knew ‘of no other way to get the word out.’ 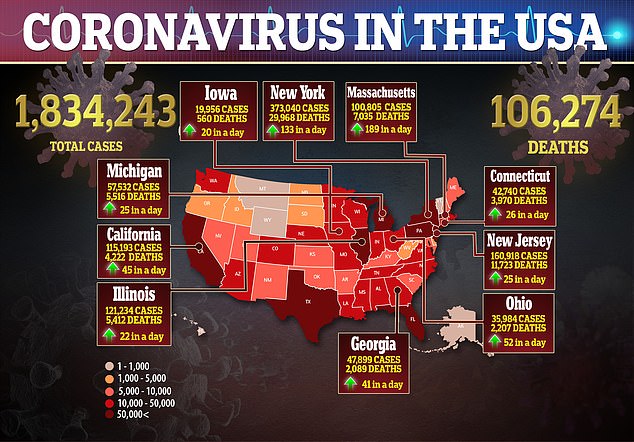 While in recent weeks authorities have released low-risk inmates due to the coronavirus outbreak, thousands have been detained over the past week after taking part in protests for racial equality.

Marches in all 50 states have come after 46-year-old black man George Floyd was killed as three Minneapolis Police Department officers knelt on him while he was face down on the ground and a fourth looked on. Witnesses begged them to stop as Floyd cried: ‘I can’t breathe’.

Jail warden Cheryl Steberger told Lancaster Online that all inmates are quarantined when entering. However Steberger said that general inmates are taken at their word when it comes to declare diseases.

Steberger said they cannot force them to take a test.

‘If it’s all made up on his part, then it is. All we can do is act on his word. He has told a number of officials now that he is positive,’ the judge said.

‘I am very worried about an outbreak following days of demonstrations,’ Lancaster Mayor Danene Sorace said in an email Tuesday afternoon.

The mayor had earlier warned people planning to protest that armed white supremacists planned on attending.

Police Chief Jarrad Berkihiser also said they have ‘definite evidence’ the agitators would show up.

The group of ‘Caucasian individuals’ hurled rocks and bottles containing cayenne pepper at cops and were seen scouting the police station after threatening to set fire to it.

He said if people had to physically attend a protest they shout stay on the sidewalk for fear of them being run over in the road.

‘Our main concern right now are the agitators that are coming into the city and trying to instigate violence between the crowd and the police officers,’ he said Monday.