This is the shocking moment when a group of people attending a meet-up with two vloggers with more than seven million followers on YouTube started fighting.

The footage was shot inside a fast food restaurant in Batley, Yorkshire.

At one stage, a man was beaten in front of several shocked children. 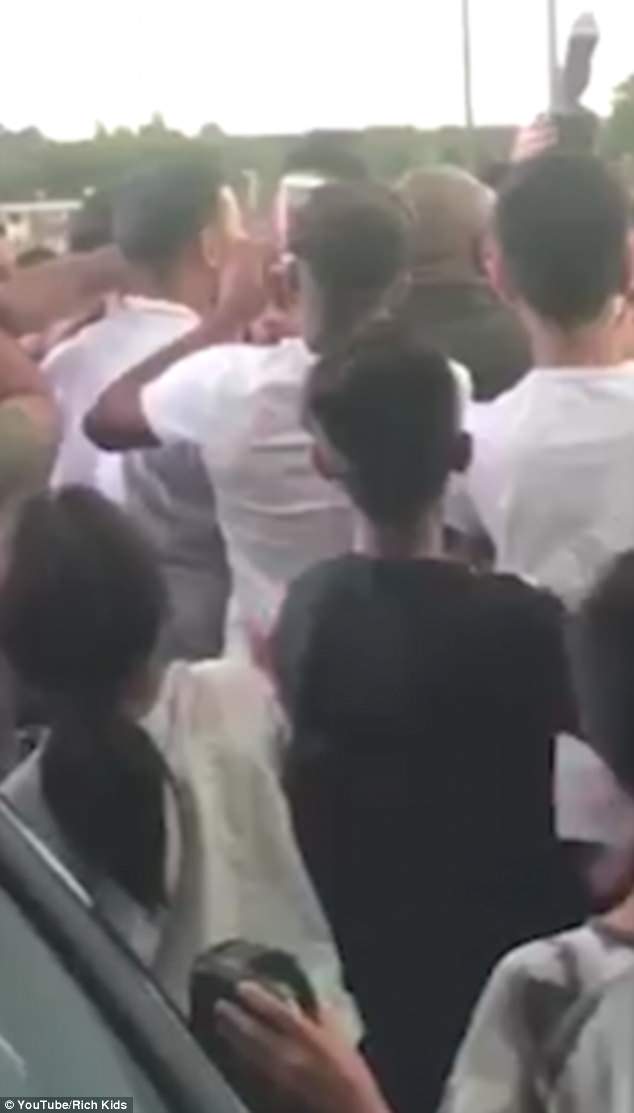 Unfortunately, one man was injured following scuffles outside the popular restaurant

Two ‘vloggers’ were invited to hold a meet and greet at Frankie’s Burgers in Batley.

One woman dropped her 14-year-old son and his friend at the event were YouTube personalities Mo Vlogs and Money Kicks were due to perform.

She told Sun Online: ‘Security were out on the street. Apparently a Dad had tried to get in with his children to Frankie’s and then security started hitting him. That’s what my son said.

‘Apparently the gentleman was getting annoyed because he’d been made to wait – people were going in for signatures and things like that. We’ve been sent a message from Frankie’s apologising for what happened since.

‘It’s very traumatising for the kids. My son won’t be going back, that’s for sure. When I arrived to pick them up, there was quite a lot of people, it was chaotic and really hectic. It was really busy…it’s a popular venue.’

The event featured Mohamed Beiraghdary, a Dubai-based vlogger known by his stage name Mo Vlogs. He shows off his rich lifestyle to his 5.5 million subscribers.

Also at the event was Rashed Belhasa – known as Money Kicks, who shows off his fast cars to his 1.5 million subscribers.

During the event, some people in the crowd started fighting.

According to a statement later released by Frankie’s Burgers to people attending the event, they said they wanted fans of the two ‘social stars’ to be able to meet up in their restaurant at their expense.

However, the firm admitted they underestimated the demand and said ‘an unsavoury incident’ took place outside the venue.

According to West Yorkshire Police: ‘Enquiries are ongoing today following a report of an assault in Batley.

‘Kirklees Police are investigating the incident which took place at around 8.45pm outside a restaurant on Bradford Road, Batley.

‘It occurred after a 38-year-old man was assaulted while queuing there with his son.’