A man has been left angered after his ‘foolish generosity’ backfired, leaving him with a stranger’s car parked on his driveway for seven months.

Omar, who lives in Stoke, Plymouth, allowed someone he didn’t know to park on his driveway in December 2021, because he wasn’t using it himself and does not drive.

But now he is now struggling to get the car off of his property. According to Omar, the person the car belongs to has refused to collect their vehicle.

Omar says he initially agreed for the owner of the car to use his driveway, as long as he was able to have use of it when needed, although he’s not made clear exactly how the arrangement came about.

When Omar got in touch to get the man to collect his car, the man said he would not comply.

Omar Badran, in Stoke, near Plymouth, agreed to let a man he didn’t know use his driveway in December 2021, on the condition he would get it back when he needed it

The driveway owner said: ‘I agreed on the condition that when I wanted to use my driveaway again, I would be able to.’

Omar said he has tried to get in touch with the owner of the car on his driveway, but has had no luck.

Omar says he has since explored legal avenues but was shocked as it is considered legally a ‘grey area’.

‘I was shocked by my initial search, it’s legally a grey area and you might not be able to get the council, police or the DVLA to do anything about it, even though the vehicle is uninsured, isn’t taxed and has no MOT. 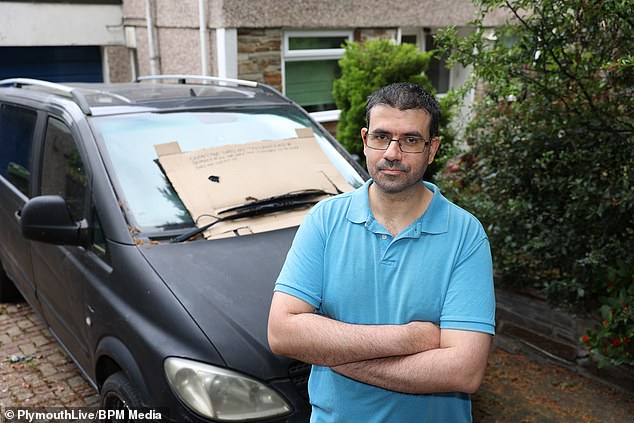 ‘I phoned up all these places and they said they couldn’t do anything.’

However, after several weeks of stress, Omar says he has found a solution under the Tort Law Act.

He said: ‘I found that under the Torts Act there is a way to deal with it. It took me several weeks and lot of stress, I thought I was going to be stuck with a really bad situation that would involve thousands of pounds spent in a civil court.’

Omar has now added a sign, which has been placed against the windscreen of the car on his driveway. It reads: ‘Under the Torts Act, this vehicle will be disposed of in one week from 27/06/22 if the owner does not collect it.’

After discussion with several legal professionals, Omar has been further instructed that he should contact the owner of the vehicle in writing and allow for a reasonable time to pass before disposing of it. 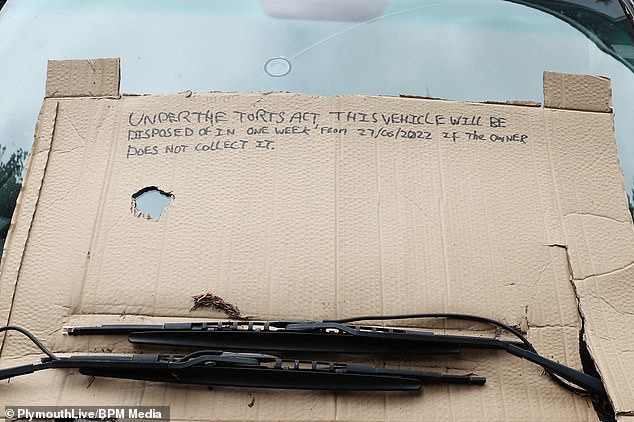 After becoming stuck in a ‘legal grey area,’ Omar took matters into his own hand and found a solution in the Torts Act of 1977, which deals with ‘interference of goods,’ such as trespassing or damage of goods that belong to someone else

Omar said: ‘I have been told by a solicitor that I should contact the person in writing. I have been told to fill in a V888 form which will allow me to have access to the person’s address and then I can write to them and quote the Tort Law Act.

‘There isn’t a specified time in the act but it just specifies that the time give for the individual to respond should be ‘reasonable,’ so I’ve decided to give him two weeks once I get the address from the DVLA.

‘This entire thing has made be really miserable and so many people have told me I’m stupid for having allowed him to park on my driveway but I was just trying to do a nice thing.’