A businessman failed to stop his car after hitting and killing a dog walker because he was desperate to catch a train to London, a jury heard on Tuesday.

Catherine Bailey’s distraught husband found her lifeless body in a ditch near their home in North Cornwall on July 18, 2016, after she had been struck by a vehicle, Truro Crown Court heard.

She had been hit by a Land Rover driven by 52-year-old company director Jonathan Kane, who fled the scene near St Minver, thinking he had only hit a wheelie bin, the court heard.

Catherine Bailey was hit by a car driven by 52-year-old Jonathan Kane, who fled the scene in north Cornwall so he could catch a flight to Germany, the court heard on Tuesday 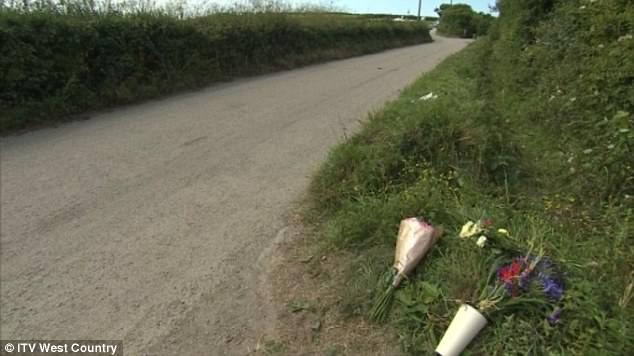 Kane fled the scene near St Minver, thinking he had only hit a wheelie bin, the court heard. Pictured above, flowers left at the scene following Mrs Bailey’s death

Kane has admitted to being behind the wheel of the Land Rover Defender on July 18th last year when he struck Mrs Bailey, propelling her several metres into a ditch.

The incident happened after he left his second home in Trebetherick and drove to a train station to catch a sleeper train to London in hopes of catching his flight to Frankfurt.

Prosecutor Stephen Mooney said Kane got out of his vehicle to carry out a brief investigation about what he had hit but did not stay at the scene. He said Kane thought he had struck a wheelie bin.

His damaged car was found at Exeter railway station where he eventually boarded his train after missing it at Plymouth and Bodmin.

The Crown said: ‘He put the need to get to the station above the need to check properly what he hit. The fact he pressed on is testament to where his priorities were that night – to get to London at all costs.’ 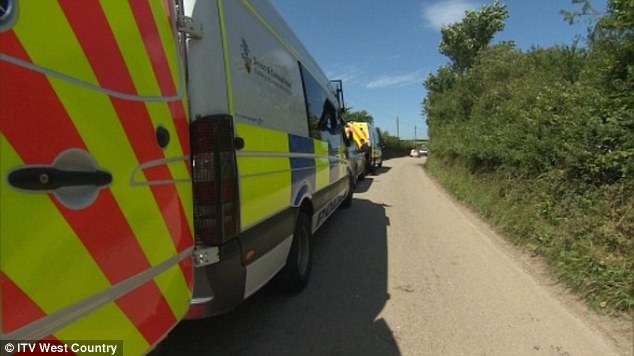 Mr Mooney told the jury that Mrs Bailey was ‘extremely safety conscious and never went out at night without her high vis jacket which was fluorescent with a reflective strip’.

The court heard her cause of death was blunt head injury and parts of the Land Rover was found on the road.

Mr Mooney said: ‘There was a prolonged period of lack of observation of the road by the defendant who was not paying sufficient attention and had allowed himself to become distracted by his need to catch the train.’

The court heard he needed to get to London so he could catch a flight to Frankfurt.

When he was arrested, Kane told police at his London home: ‘I am Jonathan Kane. I am the one you are looking for. I am responsible but at no time did I know I hit another person. If I did my actions would have been different.’

But Mr Mooney asked the jury: ‘How on earth can you be involved in impact causing that amount of damage and not know who or what you came into contact with?’