A barrister broke up a mass brawl in an Old Bailey courtroom after a fight broke out when five drill rappers were jailed for 116 years for murdering a rival with swords.

Former GB athlete Oliver Glasgow QC helped three police officers restrain a man who jumped from the public gallery as the gang were being sentenced yesterday.

The melee erupted as the judge handed down their jail terms for the brutal murder of Kamali Gabbidon-Lynck, 19, and enraged supporters of the killers started shouting abuse.

An umbrella and a seat from the dock were thrown across the court and the defendants Tyrell Graham, 18, Sheareem Cookhorn, 21, and 17-year-olds Jayden O’Neil-Crichlow, Shane Lyons, and Ojay Hamilton began fighting in the dock as they were led out of court.

Prosecutor Glasgow, who once represented Great Britain at the Duathlon World Championships, rushed over to tackle the man who had jumped from the public gallery.

The man yelled, ‘I will murder you’ to Mr Glasgow and those trying to restrain him he was bundled out of the court and handcuffed in the corridor outside.

Mr Glasgow remained calm and told concerned onlookers ‘I am fine’, when asked how he was.

The QC is an accomplished athlete competing for Britain in the male 35-39 age group duathlon world championships in Hungary, in 2007.

The Old Bailey then went into lockdown as three City of London police vans carrying up to 30 officers, including dogs, were called to the scene. 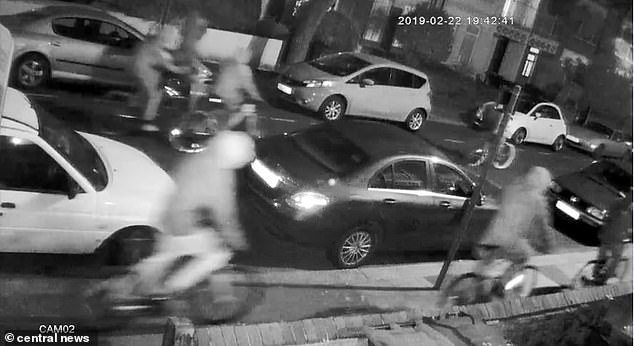 A CCTV image of the gang members cycling before the attack. Five defendants who murdered a rival with swords were jailed for a total of 116 years at the Old Bailey today

The Old Bailey then went into lockdown as three City of London police vans carrying up to 30 officers, including dogs, were called to the scene.

The 19-year-old was cornered by members of a north London gang called the NPK and murdered in front of terrified customers at the Coffee and Cream Hairdressers in Wood Green. 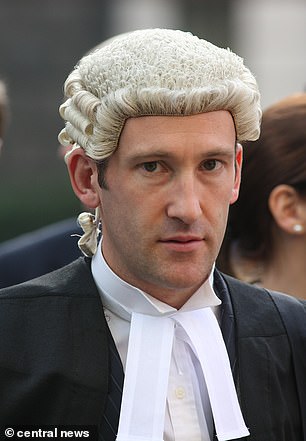 With the help of three police officers, Oliver Glasgow QC rushed over to restrain a man who jumped from the public gallery while objects were hurled in to the Old Bailey court room

His friend, 20-year-old Jason Fraser, was stabbed eight times and shot once but survived the attack on February 22 last year, the Old Bailey heard.

Both victims had links to a Wood Green-based gang called WGM.

Jailing the gang today Judge Richard Foster said: ‘The facts of this case are as shocking as they are futile. The public need to know the consequences of this sort of behaviour.’

He added: ‘A disturbing feature of this case is the use of rap music to antagonise others and glorify your conduct. This was a planned and premeditated mission.

‘Your actions terrified innocent members of the public going about their business on a Friday evening. The murder was witnessed by a four year old and the owner of the salon was too traumatised to give evidence nine months later.’ 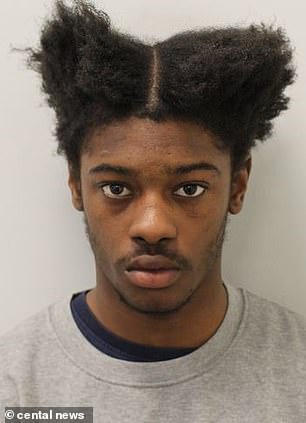 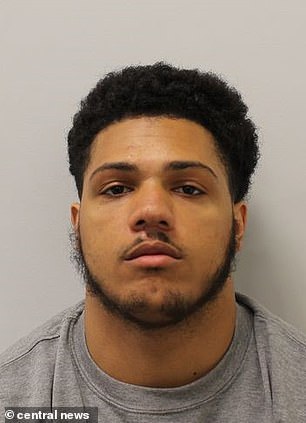 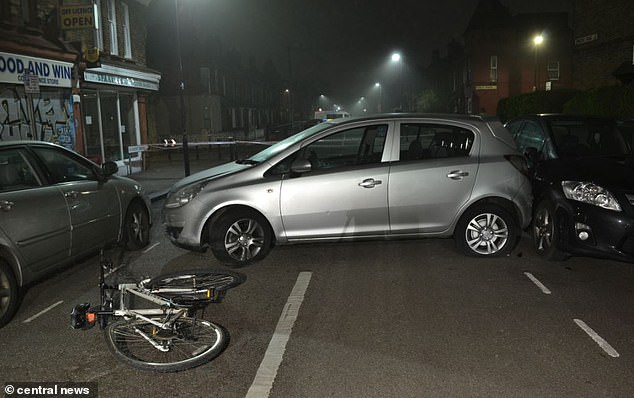 The scene of the attack in Wood Green, north London, where Kamali Gabbidon-Lynck and his friend Jason Fraser were attacked

Mr Glasgow told the court: ‘Life, it would appear, has little value to them and is something to be taken away for almost no reason and then to be the subject of cruel and offensive bragging.’

The killers arrived covering their faces on bicycles and soon spotted Mr Gabbindon-Lynck and Mr Fraser walked towards them, with two others.

Both groups brandished their weapons and ran at each other.

When one of the NPK gang members fired his handgun, Mr Gabbindon-Lynck and his group fled.

Mr Glasgow told the court: ‘The rivalry between these two groups has been a violent and bloody one, with each gang carrying out attacks on their rivals and then boasting about it online.

‘These defendants have even boasted about the death of Mr Gabbindon-Lynck in rap lyrics.’

Quoting the lyrics he said: ‘The NPK got their Rambos out. They were wiping Wood Green off the map.’

Mr Fraser, who survived the attack, told the jury: ‘I could just hear screaming from the hair shop.’ 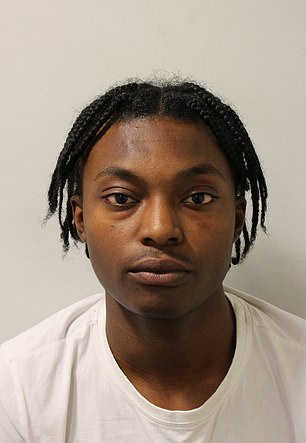 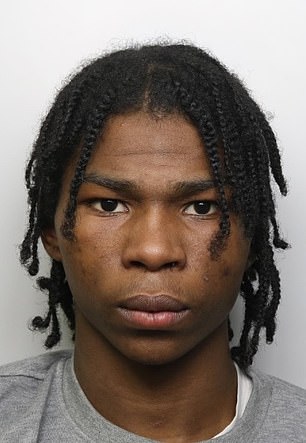 The 20-year-old relived in court his trip to the hospital where a ‘pellet’ remained in his leg despite medical treatment.

Giving evidence, Cookhorn refused to rule out that a fellow gang member had been the gunman instead of him despite the claim ‘defying the laws of physics’.

During the trial the drill lyrics blamed for glorifying knife crime were described as no more violent than the songs of the Beatles, a court heard.

John Cooper, defending one of the 17-year-olds, had slammed the case against him as a ‘cosy, clean, Midsomer Murders style’ treatment of the facts.

He quoted John Lennon and Mick Jagger and claimed drill music was nothing more than a ‘red herring’ in cases of gang violence.

Mr Cooper then quoted the Beatles lyric from Run For Your Life: ‘I’d rather see you dead little girl than be with another man.

‘This is not a drill artist – this is Paul McCartney and John Lennon from The Beatles. 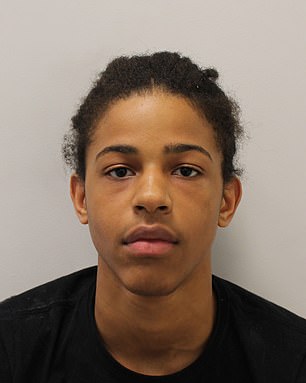 Jayden O’Neill-Crichlow, 17, was jailed for a minimum of 21 years

‘It is an utter, utter red herring. It’s not simply the domain of drill. Drill might not be our cup of tea.

‘But it is as indicative of violence as Paul McCartney and John Lennon.’

Graham, of Leyton, Cookhorn from Tottenham, O’Neill-Critchlow, Lyons and Hamilton, all from north London, denied murder but were convicted.

The three 17-year-olds were cleared of attempted murder but convicted of wounding with intent.

Detective Chief Inspector Simon Stancombe, of Specialist Crime North, said: ‘So desperate were the defendants to continue their petty postcode rivalry, the gang launched their gun and knife attack outside a busy cinema and several restaurants packed with people and children enjoying their Friday night.

‘Having chased down Kamali and his friend like a pack of animals they set about them with a ferocity I have rarely seen.

‘Not content with the damage they had caused that night they then boasted about their murderous exploits in amateurish drill videos.

‘In truth, there are no winners, no bragging rights or anything to be proud of. One man is dead, another has life changing injuries, a family is utterly bereft and five young men will spend the best days of their lives behind bars.

‘If you are caught up in a gang, or you know someone who is, please take advantage of the support services and diversion schemes available to you – before it’s too late. Visit the charity website, Fearless.org.

‘They are independent from police. They offer advice on where to get support, and will let you pass on information about crime 100 per cent anonymously.’

Catherine Gould, from the CPS, described the group as ‘very dangerous young criminals’.

She said: ‘This is a tragic case of gang rivalry. A teenager lost his life that night, stabbed to death in a busy hair salon, and another was seriously injured by defendants who showed a brazen disregard for members of the local community, running through the streets of Wood Green brandishing their weapons.

‘Throughout all of this, it must not be forgotten that were it not for the actions of Mr Gabbidon-Lynck, his friend may well have lost his life too.

‘The defendants clearly thought their covered faces and dark clothes would protect them from being identified.

‘When one of the defendants was stopped by police nearby, he even had the audacity to tell officers that he hoped they would cut down on knife crime, just after he had stabbed someone to death.

‘These sentences take some very dangerous young criminals off the streets of the capital. Our thoughts remain with the family and friends of Mr Gabbidon-Lynck.’