Aussie man, 26, shocks after getting budget teeth shaving done in Turkey despite forking out $23,000 for veneers at his own dentist – as fans share the VERY worrying risks

A young Australian man who flew to Turkey for budget veneers has been slammed by thousands on TikTok after sharing videos of the drastic procedure.

Despite having already forked out $23,000 in Melbourne getting his top teeth done, David Kosir decided to jet overseas to complete his perfect set of pearly whites for just $3,000.

The 26-year-old documented the treatment mid-procedure while sitting in the dentist chair and showed what his shaved down teeth looked like before the veneers were inserted. 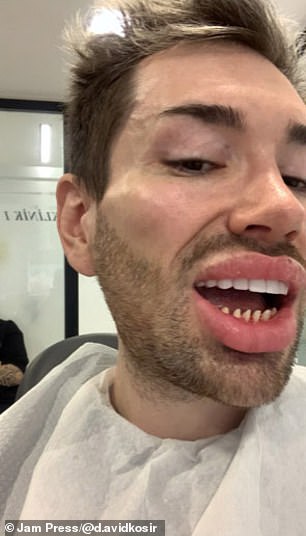 Young Aussie David Kosir, 26, wasn’t happy with his smile and decided to get veneers (left: before surgery). Last month he flew to Turkey for a budget procedure costing $3000 AUD (right: during the procedure) 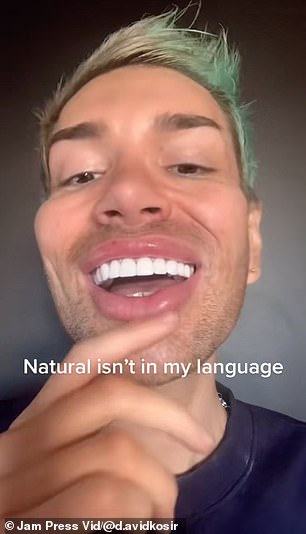 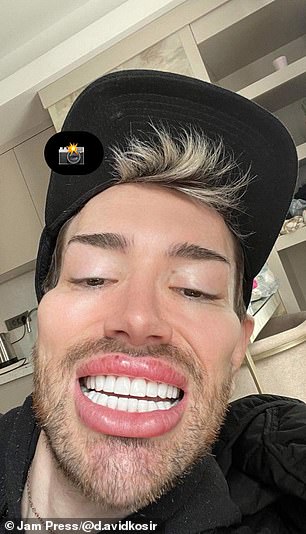 After: David, from Melbourne, posted a series of videos on TikTok documenting the process but was criticised and ridiculed by thousands online

David calls himself ‘plastic botched boy’ on TikTok and a few of his videos have been viewed millions of times.

One clip was uploaded alongside the caption: ‘Day 1 down, very exciting times #turkeyteeth #chompers.’

While he was happy with the end result and budget cost, he was criticised by thousands online.

One TikTok user wrote: ‘Have fun doing this every 10 years.’

Another said: ‘I know people who did the same thing and foods get in-between and start to rot. Smells worse than the toilet they say.’

‘American Horror Story whooo,’ a third added, and another felt ‘sorry’ for David.

After the week-long procedure, David took a few days to rest before returning to Australia – and also had a hair transplant while overseas.

‘The thing is, I’m not into a natural look at all,’ David said, adding: ‘I did my top teeth first separately in Australia by getting veneers and I received so many compliments in my personal life.

‘So after the great feedback I was very eager to get my bottom teeth done, then I could have a full mouth of perfect teeth!

‘It was just so much cheaper and the quality of work was still very good with the dentist I found having over 15 years’ experience. I did a lot of research and it saved me a bucket load of money.’

He described the process as ‘easy’ and ‘pain free’. 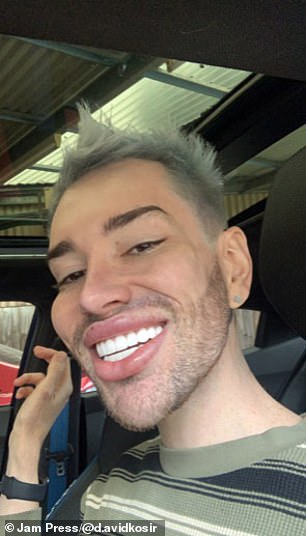 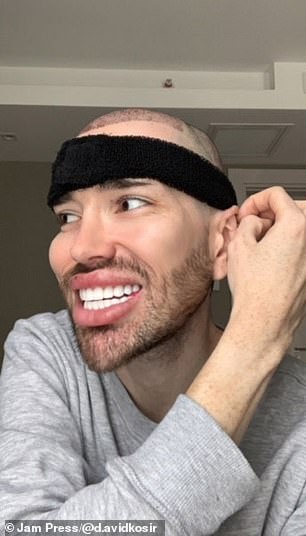 After the week-long procedure, David took a few days to rest before returning to Australia – and also had a hair transplant while overseas. In another TikTok video David revealed he’s had $100,000 worth of plastic surgery to alter his look

Are veneers a bad idea?

Some people experience an increase in tooth sensitivity

The procedure is also incredibly expensive

Unlike filler that’s a removable treatment, intense procedures such as veneers and teeth shaving isn’t reversible.