Man nearly died when heart surgery delayed due to coronavirus

A grandfather was a ‘ticking time bomb’ after he had to delay his heart surgery due to the coronavirus pandemic and nearly died from it.

Jeff Street, 59, from Pocapello, Idaho, was born with a congenital condition that affects the way blood flows from the heart.

After the largest blood vessel in his heart became severely weakened, he was referred to a hospital in New York City for surgery – but it had to be delayed when COVID-19 swept across the country.

When the hospital opened up again for operations, Street was worried about catching the virus on a plane, or passing it on to his two-year-old grandson.

However, he decided to fly for the procedure and doctors say it was a good thing he did because of the blood vessel had torn and he was very close to suffering a fatal rupture. 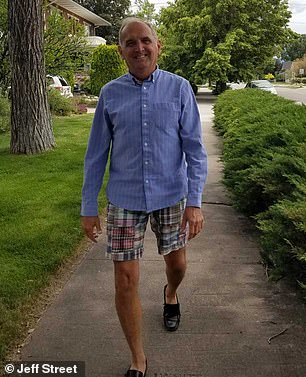 Jeff Street, 59 (left and right), from Pocapello, Idaho, was born with a bicuspid aortic valve, a congenital heart condition that affects the way blood flows through the heart. He had an operation that replaced the valve with a donor valve in 1997 and felt well until he started suffering from nausea and fatigue last year 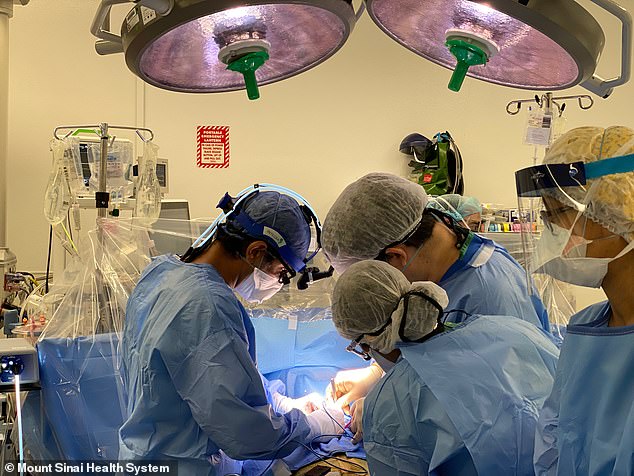 Doctors discovered Street had suffered from an aortic root aneurysm, which occurs when the aorta, the largest blood vessel, severely weakens. Surgery was scheduled for March but postpone due to coronavirus Pictured: Surgeons performing the operation on Street in June

Street was born with a bicuspid aortic valve, which is when the valve on the left side of the heart only has two leaflets instead of the typical three.

The valve, which regulates blood flow from the heart into the aorta, may not be able to close properly, causing blood to flow back into the heart.

This affects about one to two percent of the population and is twice as likely to develop in men.

However, Street wasn’t diagnosed until he was 37 during an unrelated doctor’s visit.

‘I had another condition at the time that caused me to have a high fever and a nurse practitioner discovered the murmur,’ he told DailyMail.com.

In August 1997, Street underwent a Ross procedure, which is an operation usually performed on children, at the University of Oklahoma Medical Center.

During the procedure, the diseased aortic valve is removed and an organ donor valve replaced it. 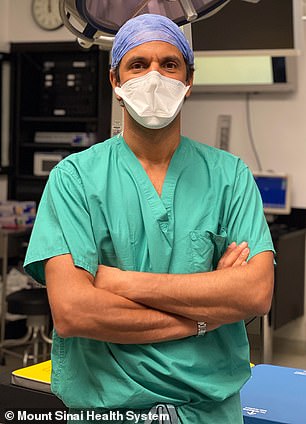 On June 9, Street had the operation at Mount Sinai, where surgeons discovered he had a tear by the root, the section that attached to the heart. Pictured: Dr El-Hamamsy who performed surgery on Street

Street, who is a professor of business at Idaho State University, said he started feeling ill last winter.

‘I’ve kind of been slowing down for a year or two but I just thought I’m getting older,’ he said.

‘But when I really first noticed it was between last Thanksgiving and Christmas. I really had no energy, I was a little nauseated, I didn’t feel well.’

His local cardiologist soon discovered that Street had suffered an aortic aneurysm, which is when the aorta becomes severely weakened.

These aneurysms can become deadly if they burst without immediate treatment.

Street was referred to Mount Sinai Heath System in New York  City, where a more experienced medical team could perform the operation.

It was originally scheduled for March but, by then, the COVID-19 pandemic began raging in New York so the operation was postponed and doctors monitored him via telehealth.

When surgeries were allowed again, Street was hesitant about himself, being in a high-risk group, flying across the country due to fear of catching COVID-19 on a plane.

There was also fear he could pass the virus onto his children or grandchildren, but he decided to take the risk.

Dr Ismail El-Hamamsy, System Director of Aortic Surgery at the Mount Sinai Health System, said the surgery, which took place on June 9, lasted between four and five hours and comprised of two parts.

‘We couldn’t repair the valve because it was too leaky so we had to replace it using an animal valve,’ El-Hamamsy told DailyMail.com.

The surgeons were shocked when they discovered that Street’s heart had already suffered a small tear that can lead to severe internal bleeding, organ damage or death. 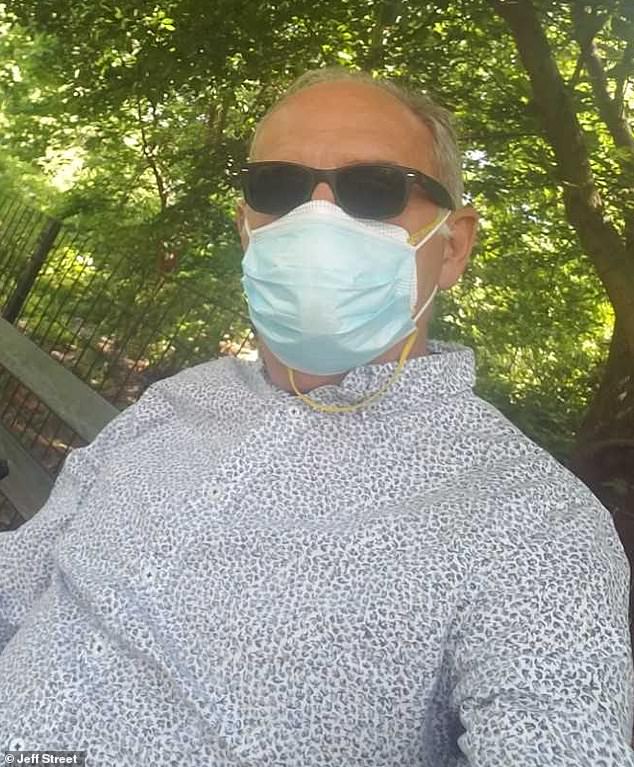 Street was told that he was very close to suffering from a rupture that would have likely killed him had the surgery not been performed. Pictured: Street on a bench in Central Park, June

‘He was very lucky in his story because that could have gone really bad,’ said El-Hamamsy.

‘Typically, when you have a little tear, it becomes a big tear and then turns into a rupture and patients die immediately. Every day that goes by was another day where he was at risk of walking and just – boom – dropping dead.’

Street says, after the surgery, doctors told him just how close he was to dying.

‘When you have a rupture, you have a 50-50 chance of dying right then and you have an 80 percent chance of not surviving surgery so it was quite close it seems,’ he said.

‘I was probably so close to having a catastrophe with a rupture. The timing was just perfect.’

Doctors say the original donor valve is still in good condition but that he may have developed some issues with the aortic root due to scar tissue.

The grandfather was discharged to his Airbnb where he was staying near Central Park.

By the time he left the hospital, he was taking walks in Central Park when he had previously been unable to walk very far prior to surgery.

Street says he’s been walking twice a day and is hoping to soon be able to ride a bike.

He adds that he hopes his story is a warning to others who may be thinking of deferring life-saving medical care during the pandemic.