Man of the people? New Labour leader Sir Keir owns seven acres of land in Surrey worth up to £10m

Man of the people? New Labour leader Sir Keir owns seven acres of land in Surrey worth up to £10m

By Ian Gallagher and Harry Cole For The Mail On Sunday

He has always been keen to play down his privilege and play up his working-class roots. But Sir Keir Starmer owns seven acres of land that could be worth up to £10 million, The Mail on Sunday can reveal.

The Labour leader acquired the property, on green belt next to the Surrey home where he grew up, in 1996, while he was working as a human rights lawyer.

It does not have planning permission, but the local council is under pressure to provide thousands of new homes, and has accepted it must sacrifice green belt to meet targets. Families living near the field fear Sir Keir might one day sell it and worry that any future development will transform the area’s character.

One neighbour claimed an estate agent was seen showing a developer around the site. However, Sir Keir insists the plot is not for sale and has never been shown to a developer.

Sir Keir Starmer owns seven acres of land (pictured) that could be worth up to £10 million, The Mail on Sunday can reveal

During the recent Labour leadership campaign, the politician – who was paid up to £400 an hour as a lawyer – played down his wealth. ‘I’m not a millionaire,’ he said, even though he conceded his London house might be worth £1 million. However, he did not mention that his portfolio includes the field as well as a half share in his late parents’ semi-detached house, which backs on to it.

The 1930s-built house – but not the field – is now on the market for £480,000. In addition, the Labour leader is thought to have a stake in a strip of scrubland between the field and the row of houses his parents’ old home is in.

This strip is being offered to the owners of those adjoining properties for £15,000 a plot, so could make around £90,000 in total − but one neighbour said: ‘£15,000 for a little garden extension seems excessive to me.’

The field has remained unspoilt ever since Sir Keir bought it, except for a ‘summer house’ built by his father Rod and for which he obtained retrospective planning permission in 2016, two years before his death.

Nigel Greenhalgh of Surrey-based Village Developments, denied he was interested in the plot but said it is ‘worth a lot of money, probably around £1.5 million per acre, so you are looking at £10 million in all’. 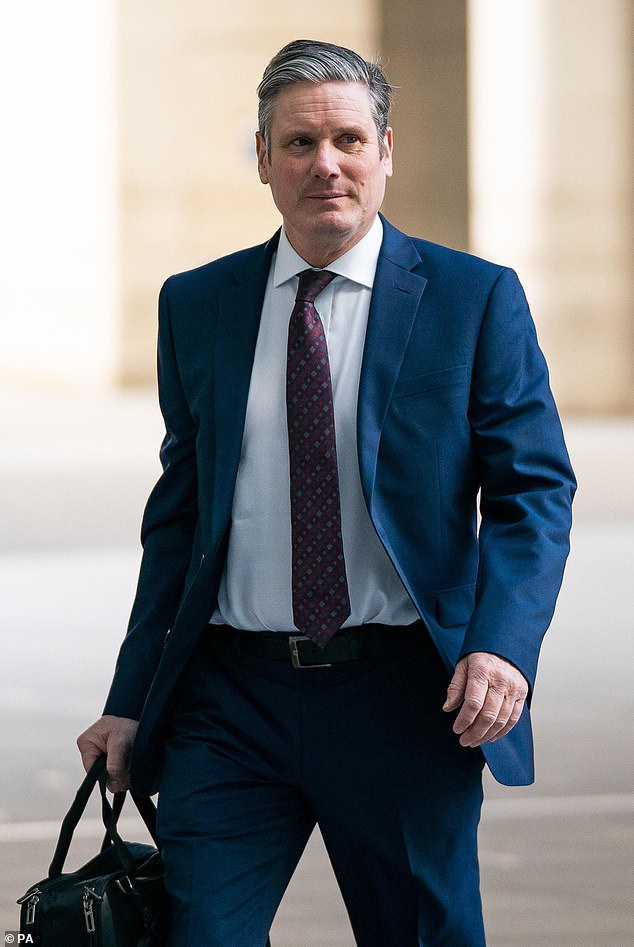 During the recent Labour leadership campaign, the politician (pictured) – who was paid up to £400 an hour as a lawyer – played down his wealth

The local authority, Tandridge District Council, has plans for 6,056 new homes – less than half the Government target for the area – but has warned that expansion could come at the expense of previously protected land.

A spokesman for the Labour leader said: ‘Keir purchased the field for his late disabled mother. The field was used to house donkeys that Keir’s parents rescued and cared for. After his mother lost the ability to walk, the field allowed her to still watch the donkeys from her home.

‘The field is not for sale and no one, developer or otherwise, has been shown around it.’

The spokesman confirmed that the Starmer family were selling the strip of land behind the houses, adding: ‘This is legally required under their responsibilities as executors to their late father’s will.’