A man has been arrested for shooting at a mother and son in a Miami Beach hotel lobby after becoming upset over their lack of social distancing.

Douglas Marks, 47,  confronted the woman and her son in the lobby of the Crystal Beach Suites in Miami Beach on Monday evening, according to reports

Veronica Pena and her son, both visiting Miami Beach from New Mexico, said they were in the lobby of the hotel when they first saw Marks.

According to the affidavit, seen by Local10.com, Marks, from Miami, told the pair: ‘You aren’t social distancing.’

Douglas Marks, pictured in this mugshot released by the Miami Dade Department of Corrections, allegedly fired ‘several’ several shots in a hotel lobby after telling a mother and son: ‘You aren’t social distancing’

He then reportedly told them that they needed to leave the hotel, before he retrieved a black firearm which he shot ‘several’ times in the lobby.

One witness was able to record the scenes after the incident, in which Marks was arrested by Miami Beach police.

No one was injured in the shooting.

One witness, who spoke to Local10 but chose to remain anonymous,  said that he tried to shield the tourists with his body.

‘He tried to shoot the girl and the kid,’ the unnamed witness told the news station.

Marks has allegedly confessed to the shooting, but told detectives that he fired his weapon because he was being followed, and asked the front desk to call 911. 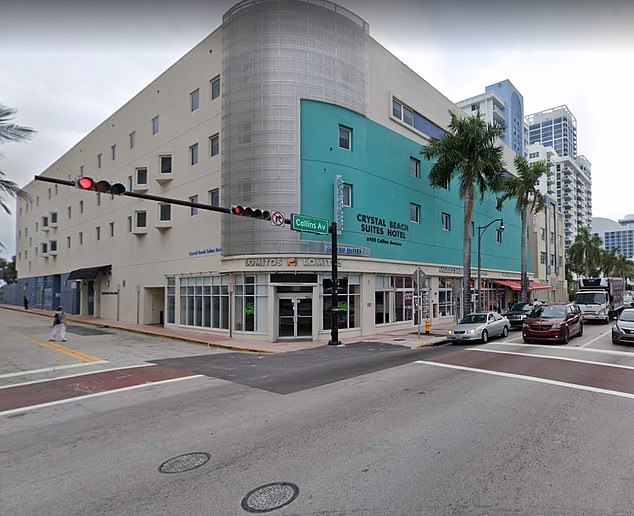 According to reports, Douglas Marks confronted a woman and her son in the lobby of the Crystal Beach Suites (pictured) on in Miami Beach on Monday evening

Marks faces several charges following the incident, including aggravated assault with a deadly weapon and discharging a firearm in public.