A legally blind father-of-two has been accused of being paid to get another man’s Covid vaccine.

The alleged scheme is believed to have sprung up after vaccines were mandated for essential workers in Victoria. 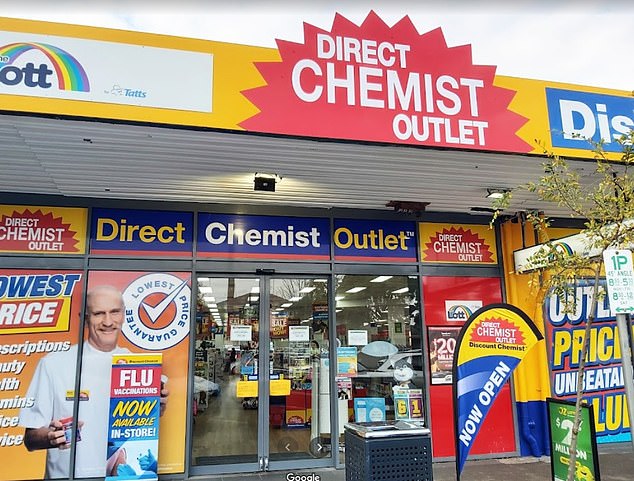 The alleged incident unfolded on September 28 at the Direct Chemist Outlet (pictured) in Dingley Village, in Melbourne’s south-east

Mr Murphy attended the vaccination appointment just before 11am on September 28 at the Direct Chemist Outlet in Dingley Village.

Police allege Mr Murphy then took on the persona of the other man – who required the jab for his job – and received a dose of the AstraZeneca vaccine.

Following his arrest on Wednesday, Mr Murphy declined to comment to police on the serious allegations.

The former concreter appeared in Frankston Magistrates’ Court on Thursday charged with deception offences, including obtaining property by deception and causing a false document to be created.

Detective Senior Constable Craig Ferris told the court he had ‘strong concerns’ Mr Murphy would continue to get jabs on behalf of other people in exchange for money if released on bail, according to the Herald Sun.

‘It certainly seems to be something that he’s doing on a semi-regular basis at the moment, so that he (Murphy) can receive cash payments,’ Det Ferris said.

‘There are considerable issues around that — both criminally, as well as from a health standpoint.’

Text messages between Mr Murphy and the man whose identity he assumed revealed the location where he would later receive his money.

Mr Murphy’s lawyer Hannah Canham pointed out her client was only facing a solitary charge relating to one false vaccination.

‘This is not offending motivated by greed,’ she said.

She went on to state Mr Murphy was homeless, legally blind and on a disability support pension who also found his recent stint in a remand police cell ‘a distressing experience’.

Magistrate Julian Ayres granted bail, with the matter to return to court in December.