Man passed out with heroin said he was headed to jail

By Associated Press and Kayla Brantley For Dailymail.com

A Vermont man found passed out in his car with heroin turned the the drugs over to police and told them he was already on his way to jail.

Eric Patton, 31, said his car battery had died in a McDonald’s parking lot in New Haven as he was on his way to serve jail time for lying to the police.

That turned out to be true. However, he was then arrested and charged with a felony heroin possession.

Patton pleaded not guilty in Rutland District court on Monday.

Vemont man Eric Patton, 31, appeared in court on Monday for felony heroin possession charges. He pleaded not guilty and was released on bail 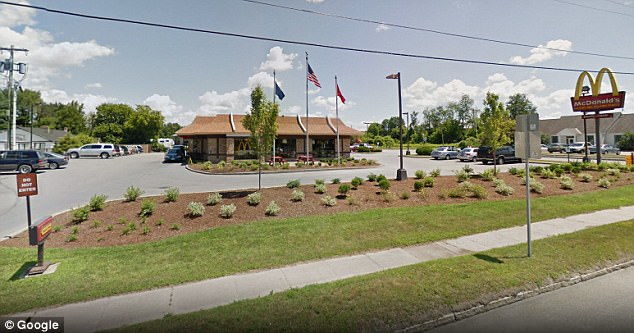 The McDonald’s in New Haven, Vermont where Eric Patton was found asleep in his car and told police he was already on his way to serve jail time for lying to the police

Patton was convicted July 31 in Addison County on a misdemeanor charge of providing false information to a police officer. He was sentenced to serve four days in jail and was doing the time on the weekends.

Officers Hoffman and Duca found Patton in his car late Friday night after a bystander alerted police of a man parked in a McDonald’s parking lot and appearing to be nodding off.

According to the Rutland Herald, Hoffman said he and Duca approached the car and found Patton inside. They woke him by knocking on the car window and he ‘appeared confused and spoke with slow deliberative speech that was slurred’ when he got out of the car.

Patton told police he had a written note by the McDonald’s manager to be parked there and repeated that claim in court.

In an affidavit, Duca said he noticed Patton reaching to his pocket several times and when asked about it Patton admitted, ‘I have possession of heroin’.