An American citizen accused of operating a drug-smuggling tunnel in California has pleaded guilty after being arrested in May.

Habib Mujica, 35, spent nearly six years in a Mexico prison for gun trafficking before being arrested when he returned to the U.S. this year.

His latest charges stem from a drug-smuggling tunnel that Homeland Security investigators discovered in Calexico, California warehouse six years ago.

A California man pleaded guilty on Monday to building an underground drug tunnel between the U.S. and Mexico. Above some of the tunneling equipment 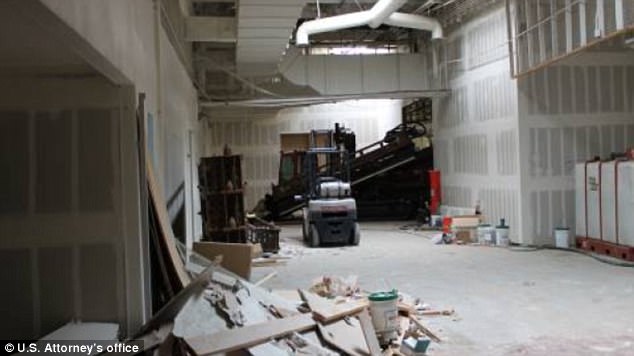 The tunnel was discovered in a Calexico, California warehouse in 2011

The San Diego Union-Tribune reported Monday that Mujica pleaded guilty to conspiring to finance, construct and use the tunnel in order to smuggle drugs under the Mexican border.

Mujica says in his plea agreement that he intended to run a business called Baja Bikes as a front to conceal illegal activities.

He said that he instructed another man to use drug proceeds to rent a warehouse, rent tunnel making equipment and get started on the tunnel’s construction.