A man refusing to wear a mask has pushed an elderly man to the ground in a cowardly grocery shop attack.

CCTV footage captured in Drakes Supermarket at Aldinga Beach, south of Adelaide, shows the man shove the shopper in the chest after he suggested he purchase a mask, which are mandatory indoors.

The elderly man can be seen falling backwards before landing on his backside, taking out another shoppers trolley during his fall.

Tempers flared after the young woman working behind the counter asked the man to put on a mask after he blatantly pushed in the line.

Police said he became irate and abusive, and the other shopper attempted to show the man masks were for sale behind the counter, pointing to them.

The anti-masker can be seen yelling angrily walking out of the supermarket before he doubles back.

Vision shows the man yelling in the elderly shoppers face, before giving him a shove to the chest – sending him flying.

An anti-masker has been captured on CCTV footage shoving another shopper, sending the elderly man flying backwards into a nearby aisle after he pointed out masks available for purchase

Police arrested a 41-year-old man on August 17 in relation to the incident.

Currently, South Australia is under level one restrictions with additional measures in place to stop the spread of the virus.

The state recorded zero new cases on Wednesday, and currently have one active case. 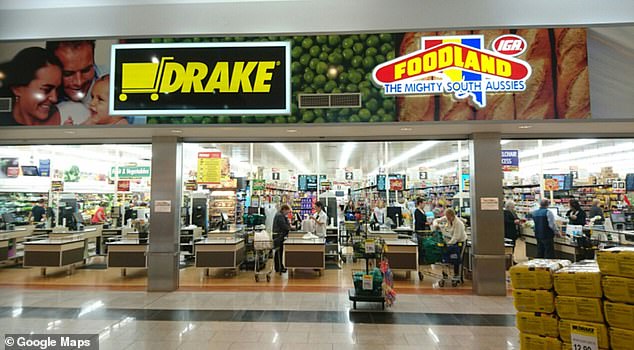 The footage was captured in Drakes Supermarket in Aldinga Beach, south of Adelaide and a 41-year-old man has been charged in relation to the incident

Residents must maintain physical distancing, keeping a distance of 1.5 metres where possible.

Contract tracing is required and a three people per four square metre rule is in place for dense seating activities.

Private residences are not allowed more than 10 people in their homes including residents, and non-residential premises can have no more than 50 people.

WHAT ARE THE COVID RULES IN SA?

–  Physical distancing measures must be followed, staying 1.5 metres from others where possible

– One person per two square metres for density non-seated activities

– COVID Management Plans required for events with more than 1000 people

– Only 10 people are allowed at any residential premises including residents

– Only 50 people are allowed at any non-residential premises